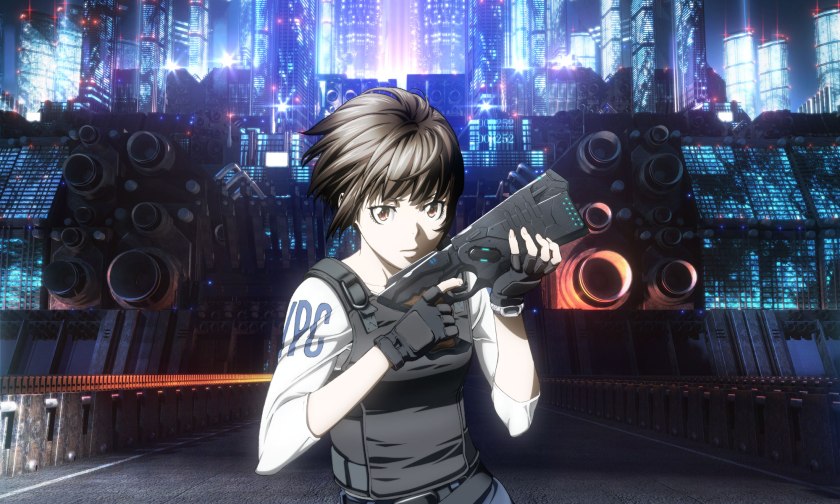 I’ve been waiting for a while to even see this movie.   I was thinking about seeing it in theaters, but traveling to a theater that is showing it is quite a challenge.  Recently, I bought this movie from Best Buy, but I had to wait for another couple of weeks before I had another of an open slot to watch it.  It was on my shelf just waiting to be opened.  This Sunday, I finally had the time and I genuinely liked it.  Let’s put that into more detail.

Psycho Pass: The Movie is a sequel to a twenty-two-episode cyber punk TV series.  THERE IS NO SEASON TWO.  The series generally takes place in Tokyo where the new season of law enforcement, The Sibyl System, reigns supreme.  While a new viewer may get a general feel for how the series works by watching this movie and may not be confused, but there are references and plot details from the tv series that leaks its way into this movie.  This movie expands on the Sibyl system plot by taking it outside of Japan and seeing how another government would use it to pacify conflict.  As usual, the main character or focal point of the movie is Akane Tsunemori, our main protagonist.

Akane Tsunemori, who may have been become one of my anime crushes *blush*, is the point of view character of this movie.  She is sent into the country of SEAUn after terrorists from that area attack Japan.  When she gets there, Akane fulfills her job of investigator in which she goes along with the audience to explore both sides of the conflict.  How some lines that are said to Akane in SEAUn are the same lines that are said to Akane in Tokyo, but the context and feeling are completely different from each other.  Akane also plays as reference point for how the Sibyl system is working itself.  I need to tell you more about her personally, because she is heavily involved in the Psycho Pass series before even describing her.  She is a brilliant field agent/Investigator for the Public Safety Bureau, is trained in hand to hand combat, and has a normal life with her friends when she isn’t saving Japan.

The art and animation of Psycho Pass the movie are what I would call visceral.  Each scene and background is about as realistic as it gets for an anime series.  The different cityscapes, the jungles, the caves, a lot of things.  Each setting feels completely different and they are detailed enough to make the audience feel like they are there.  All the characters are still given the same general designs from the series, but they feel up scaled.  The animation is like this too with each character feeling like they have weight when they fight realistic gun sound effects, gun weight, robot weight, everything.  If I had something to compared it to the most, it would be something from Jin-Roh: The Wolf Brigade or the original 1995 Ghost in the Shell film.

Just a quick comparison between Psycho Pass and Ghost in the Shell.  A lot of people think they are extremely similar to each other and in some ways, they are right in some ways.  They each have a main female protagonist in charge of a special police force in a cyber punk setting.  That’s where I think the comparisons end.  Ghost in the Shell is about asking the questions of what makes a person a person or what makes somebody alive.  Psycho Pass is more interested in asking questions about society itself.  Their goals are completely different from each other.

Anyway, onto the flaws.  I haven’t seen anything about him yet, but Kougami is the cause of some of the issues I have with the film.  It feels like he was shoved into the film to make sure people would watch it.  If Kougami was completely written out of the film, it would have the same message and a shorter running time.  At least they did something more interesting than just going “hey, here is Kougami”.  He’s just fan service in the meta and conventional since.  Seriously, he also had a lot of shirt less scenes.  Not saying that Akane doesn’t have fan service moments *beats head repeatedly*, but those are over extremely quickly and do not degrade her character in anyway.  Secondly, the soundtrack wasn’t interesting or powerful in anyway at all.  I’m glad the film is strong enough without it, but a solid soundtrack elevates any kind of series.

In the end I would definitely recommend this to the fans of the series or just science fiction fans who like series like Blade Runner and Minority Report, to watch.  Maybe even for those types who are interested in knowing about the Psycho Pass verse or want to watch a decent movie.  It’s a very western style series and movie, but it’s set in Tokyo.  That doesn’t take away the general feel of the series in anyway.  It’s decently thought provoking movie with something to say to all of society, so please give this one a watch if you can.

Psycho Pass: The Movie has been officially released for home video by Funimation Entertainment.  Please support the official release.