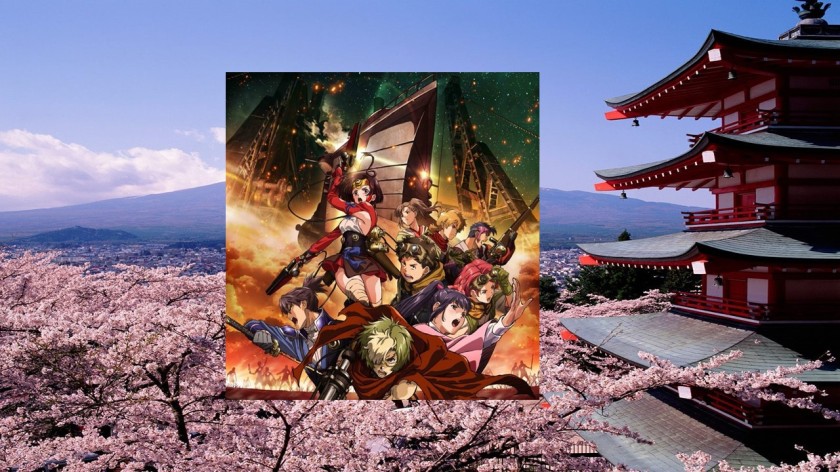 It took me a few episodes to get into this series.  From the first two episodes, it felt like a just pure action series with little substance to it.  In the end, that’s about what it is.  After a while, the characters moving together and forming bonds with each other really captured my heart and I loved it ever sense, for the most part.  There have been a few bumps on the way, but the show managed to break free from them in the end.

Okay, let’s talk about the best thing that Kabaneri of the Iron Fortress has to offer.  It’s art and animation.  Kabaneri of the Iron Fortress is without a doubt the most breath takingly beautiful series of this season.  The setting is of a steam punk Japan with the smell of a zombie apocalypse world is a very creative setting and Studio Wit takes every advantage of it.  There is a lot of detail that goes into the train design, the city scapes, the characters who apparently had a make-up artist put different details on each character, the kabane/zombies are amazingly creative, and even the inside of the train is interesting.  The animation is also pretty solid.   Each action scene is well choreographed and really puts as much energy into the show as it can.  Character movements in generally are extremely good.  There are a lot of rush lines that go along with a lot of the RAWR and YELLING SCENES just like Attack on Titan, but it’s the same director so that’s to be expected.

I know that a lot of people have complained about how Kabaneri is extremely similar to Attack on Titan.  Well, since a lot of people behind the production from that series are involved with this, I guess it makes sense.  At the same time, I feel like after the first two episodes, Kabaneri starts going on a completely diverging path from it.  Kabaneri of the Iron Fortress is its own thing and that is just fine.

Once more about the characters, the series mainly revolves around archetypes that are familiar than anything else.  Like the scared princess who needs to become a leader, her body guard swordsman, the insanely muscular train driver woman, and so on and so forth.  The real characters that getting any development or time at all, are the Kabaneri, Mumei and Ikoma.   It kind of works for this show because everybody develops together as a family and a cohesive unit.  The Kotetsujo crew are a great bunch. In fact, the best episode for me was away from the zombie madness, when they were resting and hanging out with each other.  Now on to Mumei.  She starts out as the awesome action girl, slowly degrades when we learn that she is twelve, and when she doesn’t hang out with her train family, she feels lost.  She would have been completely lost without Ikoma.  He is the heart and soul of this series.  He is very RAWR and says a lot of things energetically, but he also has a pure heart.

So in the end would I recommend this series to anybody.  Yeah, I think I would.  Is it the most intelligent series that ever existed?  No, not at all.  What you see is what you get, because there isn’t that much behind the curtain.  It’s dumb fun in its purest essence.  Action scenes with some just enough development to make it interesting.  That’s what this series is and it does it pretty well.  There are some road bumps later on, but Kabaneri is able to stick the landing.  If you are still unsure about this series, watch at least three episodes before making a decision on it.  You will get a good idea for what the series is going for.

Kabaneri of the Iron Fortress is streaming on Amazon Prime.  Please support the creators who worked on this.