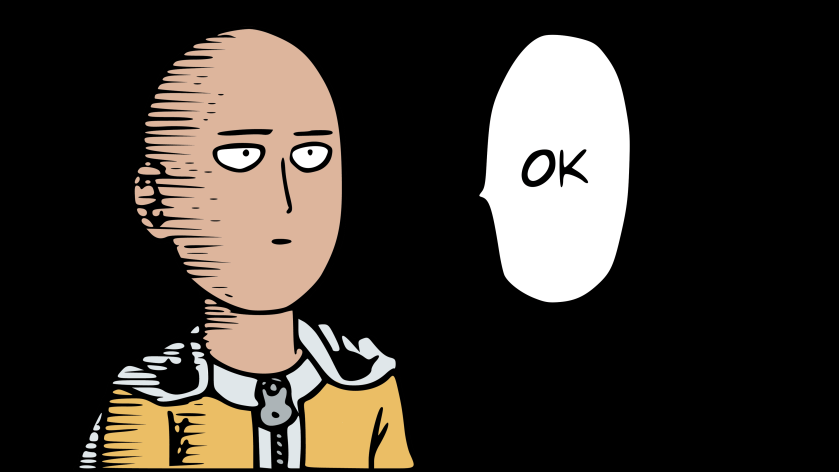 Since the last dub impression went over pretty well, here is another one.  I plan on continuing these for series that I really like.  Keep an eye out for a JoJo’s Bizarre Adventure when it premieres on Toonami.

To start out, I think the dub of this series is kind of disappointing or lacking.  That is not to say that it’s bad in anyway, but it lacks a lot of the comedic timing from the Japanese voice actors.  A big example of this came from the scene when Genos was explaining his back story.  In the Japanese dub, you can tell that the pace of Geno’s talking was increasing as he kept rattling on and the show’s visual purely represented the feelings that Saitama had.  The dub didn’t have the same oomph to that scene.  That isn’t to say that the voice actors are bad, just inexperienced.

Looking at the profiles of the voice actors in this show, all of them are pretty new.  I honestly have not heard of any of these voice actors before looking up their names.  They have played major roles in shows like Toradora, Seven Deadly Sins, some minor parts on Mobile Suit Gundam: Iron Blooded Orphans, and some of other recent anime.  This is a major break out role for each of them.  Each voice actor, Max Mittleman and Zach Aguilar, are alright in their roles but I feel like they need some time to make each role their own.  I don’t know if twelve episodes is enough for them to do that, but it will put them on the map for other high profile projects in the future.  Also, it was a truly inspired choice to pick Christopher R. Sabat as Vaccine man in the first episode.  A-plus just for that.

Watching One Punch Man again reminded me that no other anime series moves like this one does.  One Punch Man is so beyond what other shows can do from a purely visual stand point that it’s worth watching just for it.  There are other characteristics that I like about the show, but that seems to be the main draw.