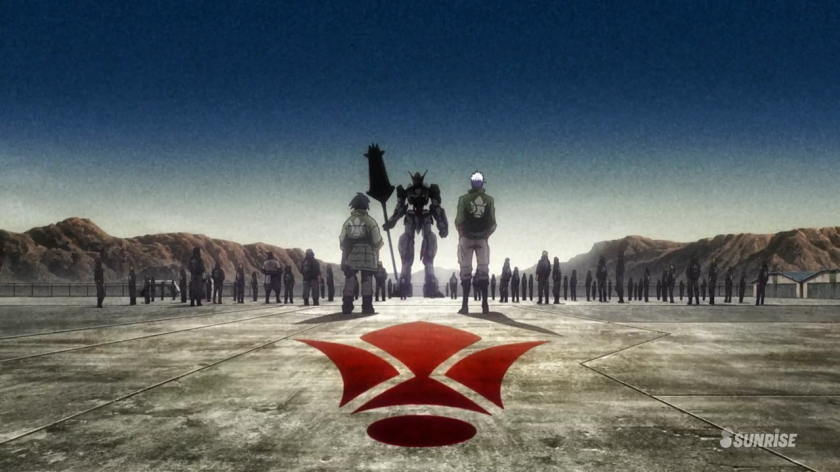 So here I am talking about Gundam again.  I know that this is not a shock to anybody because of a few articles that I’ve written about it, but I really like Gundam.  My unofficial avatar for this blog, Banagher Links, is from Gundam Unicorn and he has slowly been appearing in more posts.  It is incredibly easy for me to talk and write about mech shows, but I don’t want to do it all the time.  Having a singular topic to write about is incredibly boring to me.  I love being able to talk about Fist of the North Star then jump into something completely different like Rose of Versailles or Skip Beat.  It’s challenging because I feel like I need a different frame of mind for each type of series, but it’s worth it.

Variety is also why when I write my end of season over views of different shows, I try to break up the monotony by having a discussion article or two somewhere between the other content.  Diversifying my blog material is my all-time goal.  This is the second Gundam post in a row, not counting anime challenges, so I don’t plan on writing about it for a while unless something big comes up that shakes the ground of the entire franchise.

-A Princess that wants to change the status quo:

Princesses are a staple of the gundam franchise.  They are either hidden within the ranks of Gundam ship family or can even be the leading figure of an entire civilization.  From a franchise perspective, I consider Kudelia a mid-tier princess.  While she is not completely helpful in action, she is far from useless.  She is a guiding light of hope for the people of Tekkadan and all those oppressed by Earth.  Without her political movement and her role in politics, where would Tekkadan be in the second season?  They would still be on Mars and still until the apart of the CGS.

Another staple of the Gundam franchise.  Where would Gundam be without its people, corporations, and military organizations that have their own goals and hidden agendas?  Seeing many different parties join together to fight or complete a goal is always interesting because you never know who will betray the other first.  Knowing that each side will never fully have a complete understanding of the other, the movements around each other are interesting.

No side of a conflict is ever truly right or wrong.  There are always justifications for how one side acts, even if their justifications are suddenly lost when they go overboard for their ideals.  Also, there are no solid good or bad people on one side.  Each one has people that are good hearted and can be trusted along with those dirty scum bags that ruin everything for everyone else.  It’s like real life.

While Mars is terraformed, Iron-Blooded Orphans still has a lot of man-made space colonies.  You know, those round cylinders that the Gundam ship has stopped by for supplies or got into the middle of a political movement with?  Just Gundam things.

Well, if you don’t know what that is, what are you doing watching Gundam?  In Iron-Blooded Orphans, we have McGillis and he fulfills a lot of the requirements for one.  He is blond, has ambiguous and ambitious goals, betrays his closest friend by making political moves for revenge, and is an awesome pilot.  Good enough.  There is also that masked guy in the second season, but time will tell if he is one as well.  That guy hasn’t shown much character besides not knowing who he is yet.

(How Iron-Blooded Orphans is different from other Gundam series)

-No people with psychic powers:

Unlike a lot of main level Gundam series, there are no new types, coordinators, innovators, or whatever you call these people with psychic abilities.  Instead, this aspect is replaced by people getting surgery for the Alaya Vijnana system.   This is something that allows the user to control a mech suit then hand controls because their body is the control system.  The surgery is incredibly painful and not many people have survived it.  Even those that have survived it may suffer permanent effects from over use, if what happened to Mikazuki is any clear indication.

This may be just a Tekkadan thing because they are always balls to the wall, but the space ships have in Iron-Blooded Orphans have played a more active role in space combat.  They actively attack other ships through cheap tricks and bad assery.  Most Gundam series have their ships play a more passive role by launching mobile suits from a distance and maybe fighting off enemy mobile suits.  I know that some people would put in Gundam 00 as another show that has an active space ship fighting other ships, but I don’t think that’s the case.  The Gundams in 00 still protect the ship and do most of the work.  Tekkadan never relies on mobile suits other than to distract other mobile suits while they attack.

-The protagonist crew is a mercenary unit:

Most Gundam protagonist crews side and fight for Earth, even if they don’t believe in the Earth Federation’s complete set of ideals.  Even when the Earth Federation doesn’t fight, the rag tag bunch of misfits fights for Earth in its place.  Besides Gundam 00, not many people have formed their own side to fight against earth.  The main different between IBO and 00 is that 00 has a small select unit of people chosen from computer data.  IBO is a full-time organization that is made up of a bunch of people from different backgrounds that join because they don’t have anywhere else to go.  Tekkadan is also starting to own its own land and property on Mars and they maintained a second branch on Earth for a little while.

-Tekkadan vs The Earth (Gjallarhorn)

This is a universe where the Earth is oppressing a lot of people and the non-Earthlings don’t have a Zeon or a Zaft to turn to.  Instead, in the first season, they only Princess Kudelia and Tekkadan to turn to for help instead.  Unfortunately, Tekkadan is not a political faction that you can join and there is some hidden political movements behind the scenes.  Unfortunately, more mercenary groups form instead.  Mars may gain its independence, but it’s not going to be the way that one would expect it to happen.

-The Mechs are not as special:

In Iron-Blooded Orphans, the mechs are not seen as anything special.  They are just machines and considering that this is a more grounded universe, so this works incredibly well for what they are trying to establish.  Despite Mikazuki’s feats, his Gundam can never fully handle everything he tried to do with it in combat.  After each battle, it ends up in front of the ship’s mechanic for a while.   I should also mention the small mobile suit kill count compared to a lot of series, which shows that the other pilots are actually skilled.

So in the end, I hope I accomplished two things with this list.  Convince older Gundam fans to watch Iron-Blooded Orphans and get new fans to check out the other Gundam shows.  Maybe I can convince people who haven’t watched either to watch both of these.  No matter what, I want people to WATCH MORE GUNDAM.