Okay, so I haven’t been able to produce these as fast as I thought I would, but the holiday season is a busy time of year.  Work has been getting chaotic and staying out one night after another after another has been exhausting.  I have barely had time to keep up watching with my seasonal shows and watch Princess Tutu recently.  I am also behind on a lot of live action shows, so I am glad I get some time to rest soon. 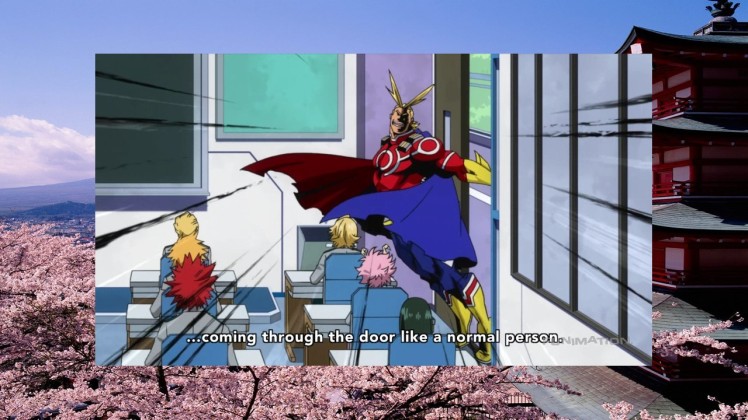 I was completely surprised with this one.  For starters, this is as basic of a shonen series that a shonen series can get from a story and character point of view.  I don’t care about any of that because the execution was amazing.  My Hero Academia has so much heart to it that it carries the rest of the anime for me.  Midoriya is a fantastic main character for this story, but he’s only the start of a wonderful cast of colorful characters.  It is rather unfortunate that the rest of the cast have only started to get developed at the end of this season.  I must tell you, this is one of the few series that made me read the manga because I wanted more.  I am currently in the middle of it and can’t wait for season two.

This is another anime that I’m shocked I liked as much as I did.  From a first appearance, it looks like another cute girls doing cute things slice of life series with witches.  That is mostly what the series is like, but the balance of magic, the exploration of the magical world, and the balance of Makoto (the witch) learning what we know as the mundane was interesting as well.  I mean, a sky whale that looks like Laputa and a witch café that has the veil of night as a guest is amazing.  How can you not get excited about things like that?  Makoto learning the basics of farming and cooking were interesting as well because while most of us know about these aspects, having a Witch learn about these sorts of things was rather intriguing.  Especially since Makoto has an endless amount of enthusiasm normal things.  With this great balance of the magic and the mundane, Flying Witch is a great watch.

Kabaneri of the Iron Fortress 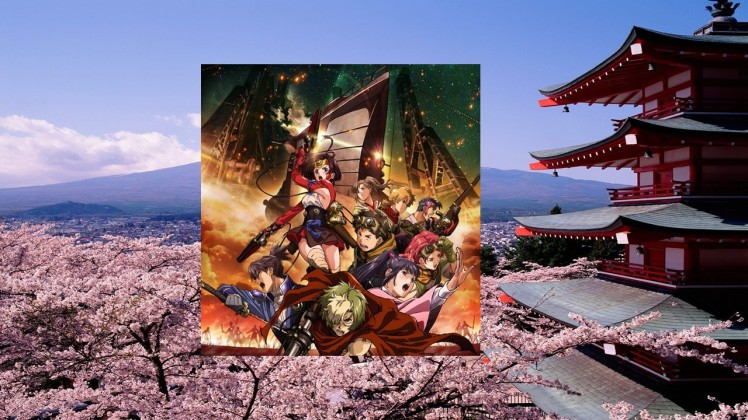 The strongest thing this anime has going for it are it’s art, animation, and action.  The setting is steam punk mixed with Japanese traditional culture which is shown extremely well by its high quality and detailed art design.  This detail continued with the characters as well, because each one had their own design and face coloring that made them stick out from one another.  The action was well choreographed and the animation for the fights, the movement, and the train itself was fantastic throughout.

You may have noticed that I didn’t say anything about story or characters yet and that’s because I consider this anime more eye candy than anything else.  The best part of Kabaneri was the first half when each episode was this train group against zombie threat 102,348,953.  Everybody on the train developed together as a family and that’s what made everything work.  When Kabaneri had a defined plot and villain, the show was as it worst because everything was cliché with no deviations from the norm.  Still, Kabaneri stuck it’s landing with the series’ ending and the train family was back together.   The adventures continue.

Yet another surprise for me.  This is a comedy series based around a perfect character.  At first I thought there this would be boring, but it never was.  Sakamoto himself is not hilarious, but every situation the anime threw him in was.  The anime did take place mostly in high school, but it also took the effort to change up the scenery for him.  A fast food restaurant, a video store, or even a singles mix party.  The side characters are great as well.  Each one of them gets development as the series moves on and it just makes Sakamoto even more endearing.  Add in some fantastic comedic timing and Sakamoto is definitely worth your time.

This show hit my right in the nostalgia.  I loved the 90’s character designs and the 90’s shonen plot while also being something completely new.  The Ushio and Tora manga is from the early 90’s before a lot of the tropes that are famous now ever were popular.  A person as a weapon is not a new concept, but seeing people physically turned into them is a horrifying experience that I’ve only seen in Ushio and Tora.  That’s another thing about Ushio and Tora, it doesn’t hold back any of the trauma that Ushio, Tora, or any of the side characters face throughout the series.  The whole memory erase plot in the beginning of season two shows this because it lasts throughout the season and it’s one of the many things that eventually leads to Ushio breaking down.  Now remember this was before Shinji Ikari on Evangelion ever did it so this was new stuff.  I can go on and on about this show because I already did for my 30 day anime challenge thing, but know that I love it.  If that hasn’t become obvious yet, here is me blatantly writing that.