I know that a lot of other people have commented and made their posts on this already.  Well, I want to share my thoughts too and they may or may not be different from everybody else.  The Crunchyroll Anime Awards was a cool concept, but I feel like it’s execution was heavily flawed.  I saw quite several problems and issues with it that should be worked on for next time.  Getting people of “anime authority”, if we have any, was a good idea, but after that it seemed like one issue dropped another.  What are they? Well, let’s consider this with while considering these issues of The Crunchyroll Anime Awards with more detail.  This is all my opinion, of course.

Starting out, it seemed like Crunchyroll had some good ideas on how to do this thing.  Get a good number of people that have some position of power in the anime community together to put together a select list of anime for different categories like “best villain”, “best boy”, “best opening”, and etc.  According to Arkada’s podcast with Miles Thomas from Crunchyroll, the judges didn’t even talk to each other to decide this list.  Their lists were sent anonymously and therefore there were a lot of repeats and questionable things to vote for in different categories.  I wish that there was more diversity in the choices, but that didn’t end up happening.  Oh well, something to fix up and improve on next time.

The next big fault was opening it up to the public without a limit to how many times a person can vote.  Unlike Anime News Network’s poll for best series of the year, Crunchyroll’s awards did not have anything set up like that.  Maybe they were thinking that people were going to use the honor roll system, but we all know that doesn’t work on the internet.  I feel like this is how Yuri on Ice got all its wins.  Or maybe that many people voted for YOI, but I can’t help but feel doubtful about that.  I mean, the polls with Yuri on Ice winning had more people vote for that show then the total number of votes of categories without Yuri on Ice.  That seems a little suspect to me. 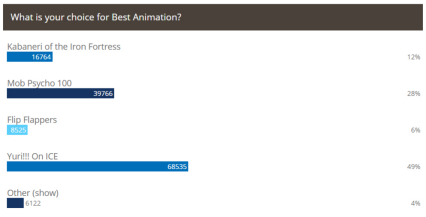 I mean, doesn’t that look a little fishy to you?  I will never say that anything that people vote for is wrong because voting is always up to the individual, but you must admit that there is something off here.

In conclusion, The Crunchyroll Anime Award was a good idea, but was a bit of a mess this first time around.  I know I am just a guy on the internet that is running a blog for some reason, but these are the two issues that Crunchyroll needs to improve on next time.  Get the judges to talk to each other, only allow one vote per person, and maybe wait for the year to finally end before getting the judge together.  Waiting a little bit will give a full fall season for judges to look at before deciding choices.  After that, whatever happens, happens.  People are going to salty about the results either way, but this will take a way a lot of the reasons of why people be salty.  That’s it, that’s all I got.