I never thought I would write a post about food on this blog, but here I am. ACCA is an anime that is obsessed with its food and its political intrigue. At times, they both walk hand and hand. Almost like that is the point. If there is one thing that represents how a society lives and breathes, its food. What kind of food a country eats and how they eat it can tell you what that country grows as a main stable in agriculture, what style they live in, and the standards of etiquette and manners that the country in question maintains for its people.

Take the United Kingdom vs The United States food etiquette as an example. Here in the United States, we like eating with our hands. We put ground beef or mixed up animal parts put into a sausage, wrap them into a bread like thing with different condiments, pick them up and eat them. We also pick up pizza by its crust and just throw the things into our mouths. That’s just how we roll here. Something tells me that this kind of attitude wouldn’t work in the UK. Please correct me if I am wrong though, because I am basing all of this off clichés and nonsense like that. That is not the correct thing to do.

Moving on to the Anime, ACCA is completely obsessed with the stuff. There are side characters whose sole purpose is to eat food. I mean seriously. Jean Otus has subordinates in his office who only like eating different sorts of treats. His sister does the same thing, but at least she plays the role of the land lord of the building they are living in. When Jean and different members of ACCA are meet together at the countries capital for the one-hundred-year celebration of the creation of ACCA, food was emphasized as well. It was specifically mentioned that the King likes his sweets. Wherever there is political intrigue, there is also food. I know that this can be seen as an obsession and is somewhat pointless to the story, but what I’m trying to say is that food plays a more important role than that. It’s also an easy world building memory tool that helps the viewer remember each district easier.

Without ACCA’s food obsession, I wouldn’t remember anything about each district. The creator individually linked each district together with their food and I think that is brilliant. Especially since the this is a one cour series and Jean seems to be breezing through his audits of different districts in the series itself. Without mentioning food, I wouldn’t remember the district that lives off potatoes because they are in a harsh and cold environment, the district that has large pieces of food because it’s an agriculture district, the tropical island district, the district that is held back 100 years, and so many others. Each district’s food and etiquette is distinct to themselves and that’s about all we get for most of them. Occasionally there is a small event that makes a few of them stand out from the rest, but that doesn’t happen too often. I’m glad that I am left with something instead of nothing because it makes the world feel complete.

Since this is a food related post, let’s look at some of ACCA’s best. It seems completely necessary for this to appear in this post, because it’s ACCA. Food is necessary for everyday life and just for fun. 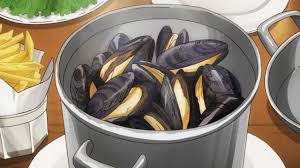 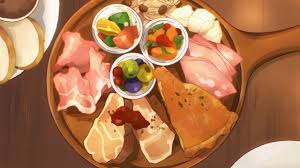 Now that I know that I wrote this as a joke on twitter, but I truly believe that ACCA needs a food competition episode. It would be the biggest exchange of culture that ACCA ever has. It can also be the ACCA’s grand finale. Since there is the most food that was ever involved in ACCA, which is saying a lot. That also means that is where a lot of the political intrigue will meet up. Especially since ACCA’s political intrigue revolves around its food. It’s the finale that ACCA deserves and the finale that we need right now. It is a slow show, but seeing characters and plot developed at a realistic pace is intriguing. It’s not an action show, but a show about the set up.