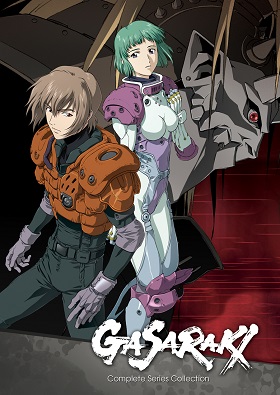 I know I talked about Eva a lot recently, so this is the last of it. Infact, this is also the post of Mecha march. So anyway, will I make no promises when it comes to not talking about Evangelion in the future. Gasaraki borrows a lot of the ideas and themes of Neon Genesis Evangelion, but spices them up in its own way. Compared to Rahxephon, which is its own series as well and not a clone (fight me if you don’t believe me), the comparisions to Evangelion are tougher to make here.  It does this by making the series highy grounded, adds more Japanese mysticism to the whole charade, actually has a well-defined happy ending. Gasaraki still suffers from a strong lack of characterization though. It’s a series that is more in love with its political intrigue and grounded realism then its characters.

I’ll just describe the setup of Gasaraki, because the whole story is way too convoluted to completely describe it. The story starts with the conflict between the United States and a fictional middle eastern country of Belgistan. This low-tech country suddenly out of nowhere has weaponry that more than rivals the technology of the United States.  Why did they get? These mechs that are called Tactical Armor. Seeing an opportunity, the Gowa family of Japan uses this opportunity to send in their own tactical armors in Belgistan to show their power. Yushiro Gowa, the fourth son of the Gowa family, is one of the pilots that is deployed to Belgistan.

If you’ve followed the pattern of how I “review” things, you know that this is where I usually talk about character. I can honestly tell you that I never truly got a feeling for any of the characters. Well, at least the main characters. I mentioned Yushiro in the last paragraph and he is technically the main character, but I ever get a sense of any sort of personality from him. The show tries to explain why, but Gasaraki never truly does anything with the information it gives you. It’s just there as a fact because no huge revelation or change happens to his character to make him more dynamic occurs from it. If there is anybody who got the most character development, it’s the side characters. Their conspiracy theories to change Japan and the world bring out more of who they are then whatever our protagonist ever does. In fact, we don’t meet our protagonist for real until three or more episodes in.

Visual, Gasaraki is stunning. There are so many great character designs, mech designs, and a huge amount of unique and detailed backgrounds that constantly make the show interesting. I love the old cell shade style of animation and since the dvd I had was upscaled, it looks wonderful. I honestly think that 90’s anime that has been upscaled for high definition looks the best out of all the anime I have seen. Of course, I might be a little bias on this. I should also mention the animation is pretty stellar as well. While there aren’t an obscene amount of them, but when they show up they are mind blowingly good. Incredibly fluid with cool effects on the side.

What is the best part of Gasaraki? It’s realism. The tactical armors that I mentioned move like real robots and can barely beat out a tank on a speed test. Not to mention that most of these giant robots can be defeated by jet fighters. Each of the units attacks are handled like a Special Forces unit. Each mech is connected to an operator that gives them commands by satellite footage.  The politics are realistic as well. How UN forces deal with forces in a random Middle East country are realistic. I am only assuming that though. There is also a talk of how grain exports and trading that will ruin the economies of entire countries. While that seems a little ridiculous to me, but what do I know besides the basics of macro economics? So yeah, realism. Gasaraki has got that.

So would I recommend you to watch Gasaraki? Maybe. It depends on how much of a mech fan you are. There are some interesting concepts that are used in Gasaraki, but since there is little to no character work there is little attachment to what is going on.  I was bored in a lot of series and found myself drifting off and repeating scenes that I missed. The Japanese history and mysticism was interesting, that’s for sure. The grounded villainous plot made sense to me for some reason. Maybe what was going on made sense.