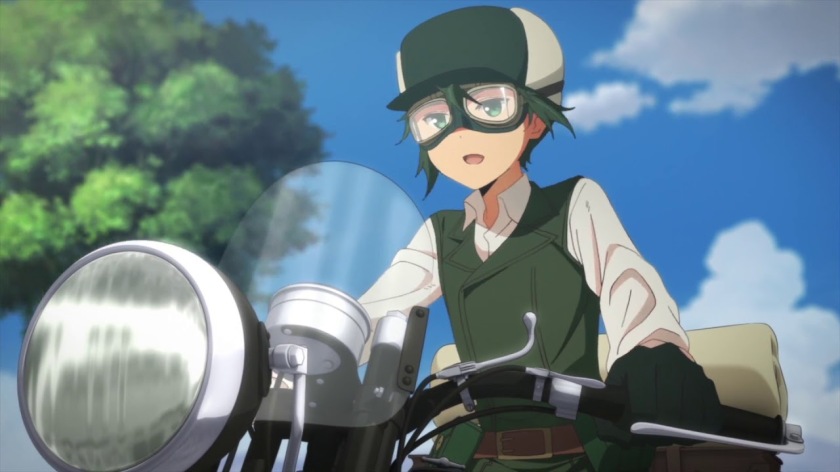 Hello everyone, welcome to my first and probably last portion of episodic reviews that I will ever do. Kino’s Journey is something special for me and considering that I know what kind of show this is going to be, because I watched the original, then that opens up some avenues that no other show has the chance to have. I’m not sure how often I will post these, but with how fast I post content recently I need to find a much more sustainable pace of writing these. I also don’t want this blog to become the Kino’s Journey only blog, so I need to figure out pacing as well. That’s where fun with science and experimentation comes in. Yay science!

The first thing that caught my eye was how different the art and animation style is compared to the original series. I am not a huge fan of Kino’s art design, because her design her is inhuman to me. I prefer the anatomically correct Kino from the 2003 series, but like the color a lot more here. If there was a combination of the two I would be golden. As far as everything else, the color and art design look great. No complaints. I also noticed the series reused the same motorcycle stop animation a few times and repeated uses of Kino doing her morning gun practice. This tells me that this show doesn’t have a lot resources behind it. That’s fine with me. Kino’s Journey is more a story telling series where Kino shows up in another country, explores that country for a few days, then leaves. No big deal there.

I find the timing of this episode strangely interesting because of its subject matter. The first episode of this Kino’s Journey series was about gun laws and there was a huge mass shooting in Las Vegas this past weekend. This episode starts with Kino traveling to yet another city state, but meeting up with a stranger who is extremely excited about living in this town where you can shoot anyone at any time. Sound familiar to you? Anyway, these two have a short conversation where the guy tries to focus Kino to carry half of his gear, but Kino refuses. She rides off for the city and leaves a huge amount of animosity between the two as a result. Like you would expect it to, this interaction is paid off later on.

From the conversation Kino had with this stranger and the brief conversation she had with the gate keeper of this city state about how she can be shot and killed at any moment, Kino feels uneasy when she visits the town. The shock is unreal, because it looks like a perfectly innocent town. Despite having no police, it’s all very well kept, well maintained, and has nice people who are interesting in what Kino has to say. Nobody was shooting other people in the middle of the streets, so it’s completely different from Kino and Hermes’ expectations. Despite all that, Kino is still a little paranoid about the situation at hand. Especially since every single person in town carries a gun with them. She still cleans her pistols and practices her quick draw every morning just encase.

After traveling around the country (city-state) and talking to the cities people, Kino gains more of an understanding of why this location is the way it is. All of this built up tension culminates in the moment where Kino meets with the first guy again. That guy tries to kill Kino, but the whole country rejects killing for the sake of killing. Each one of them finally pulls out the weapons they have been carrying around and murder the guy. Thus, it is revealed to the audience that this specific location is meant for people who used to kill for one reason or another, but don’t want to anymore. Interesting concept.

Can I just say how glad I am that Kino’s Journey is back? Can I just hug this entire show for existing? Is that weird? This episode is great. Kino’s Journey goes through a lot of episodes dedicated to the human condition, which this is another one of this, it’s not fully philosophical all the time. Sometimes it’s about somebody wanting to build and airplane to fly in the sky or the shear emotional impact of the final episode of the 2003 series. There is one thing that is always consistent though, the writing is always great. You know what, it still is. Combine this with great visual direction that was prevalent throughout episode and it’s just great. I want more and that’s the best sort of feeling you can have toward and anything.

Next episode is the coliseum arc again, so I am interested in how they do it this time. In the original series, that was a two-episode arc in the middle of the series that I always jokingly refer to as the quickest and best tournament arc ever. To me that was the least interesting portion of the original series as a whole, which is like saying that it’s my least favorite cookie. I love all types of cookies anyway, so the competition is mostly pointless toward the end. Well everyone, until next time (whenever that is).