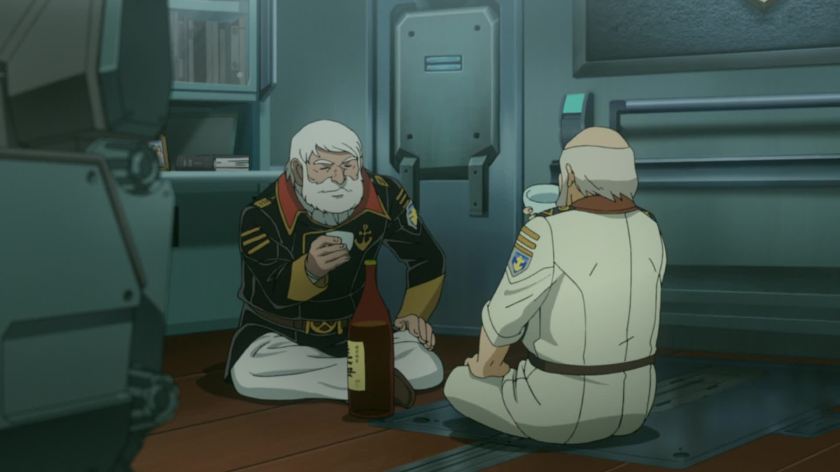 With all the action out of the way from last week’s episode, this episode is a relaxation episode. An episode dedicated to cooling off after fighting for their lives and finding whatever time the crew can relax before handing into even more hell. As Gandalf said in Return of the King, this is the deep breath before the plunge. A lot of things await this crew in the deep reaches of outer space. Things like the evil Gamilas Empire and the unknown strange phenomenon. Life is never certain, which is why this is a great terror to our crew. Still, there is nothing to worry about today.

Since now a lot from a story perspective happened today, it’s extremely easy to describe what is going on in a short paragraph. This episode was dedicated to two or three things. The first is a line crossing ceremony. Usually this sort of thing is dedicated to ships crossing the equator for the first time, but this time it’s used to celebrate crossing the solar system. Part of the episode is dedicated to some of our many crew members drinking and having a good time amongst themselves. The next part is dedicated to crew members spending an allotted amount of time calling home to their families for the last time before going into space. You know, space radiation jams communication and all. The last part is dedicated to people who don’t have anybody to call back home to. We see them either helping with the repairs outside or joining together to talk. Very simple, yet this is where the richness of Yamato’s characters comes in.

If this show can develop its characters so well in a short amount of time, imagine what an episode dedicated to it is like? There are so many things going on internally with the Yamato crew that it feels completely like a real ship.  There is something going on with a security officer and our female science officer, which is intriguing to me. Then there is also a well-developed love triangle being built between Kodai and Yukki and Kodai and Akira. (Akira is a Marsanoid by the way. She was that white haired woman I mentioned a while ago). A meeting of old friends between Captain Okita and Engine Officer Tokuagawa shows how the captain’s current mindset is. Then I can’t even explain how to you what is going on with all of these characters during their skype calls to earth. Having a glimpse of a lot of their backstories really sells these characters well and shows how bad conditions are on Earth. The Yamato crew better make it home on time.

A relaxation episode is good from time to time, but I am looking forward to getting into the action again next week. While I would look like to see a science fiction slice of life series sometime in the future that just features a crew going from place to place, this isn’t the show for that. Still, something to look forward to if it happens. Back on course, the Yamato has to make it back to Earth and save everyone after all. That’s not really a slice of life kind of thing. Still, this was a good episode centered around a good cast. See you all next week for even more.

This post is a part of the Yamato 2199 blog tour between me and DerekL. If you want to get involved: please click this link here, read what it says, watch the show with us, and post before noon on Fridays. Simple enough right?