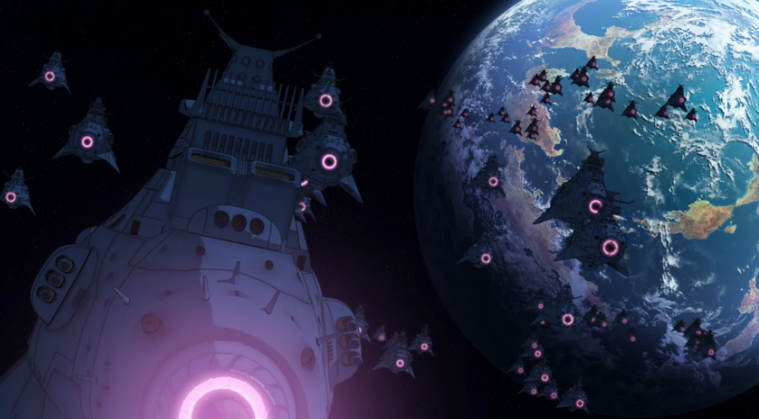 This was more then a return to form for Yamato 2199, it went above and beyond what it needed to do to make me feel better about the show. Not only were there some epic battle scenes and some complicated plots being put into motion, but there were some amazing cuts of character animation going on too. Where did that come from? I can’t say how much I love this show enough. Seriously. Both the Gamilas side of this story and the Yamato side of this story are far more complex the “these are the good guys facing off against the over whelming force created by the bad guys” thing. Not flawless, but I am still amazed on how many details this show can pack into a half an hour of an episode. Yeah, I am going to stop rubber necking here. Time to get to the goods.

Spoiler Warning from this point on.

This is the part where I complain about how there isn’t enough episode length. So many interesting details were put into place. One new admiral we have never seen before completely decimated an entire planet with his fleet because there was a rebellion on it. You remember on A New Hope when Han said that the empire needed thousands of ships with more fire power then he could imagine to destroy a planet? Well, that’s exactly what happened here. I know that Yamato came out before SDF Macross and that I saw Yamato after SDF Macross, but I was reminded of the Zentradi’s awful frightening power of destroying planets as well. I am pretty sure this is where all of that influence came from. One thing influences another, as I keep saying.

Leader Dessler was supposedly on his way to the forward Gamilas base to see what was going on. Our head of Milky Way command, Domel plans his attack on the Yamato before Dessler shows up to show his loyalty. Since he has been sending constant scout ships to the Yamato which in turn constantly puts its crew on alert, the Yamato is desperate and heading toward a specific planet to resupply. Knowing this and a star that will obscure the Yamato’s jump, Domel plans an all-out assault against it. So the attack goes well and they almost Destroy the Yamato completely, until he gets a call from command. He has to immediately jump for home because something huge happened. Remember when I brought up that Dessler was on his to the forward base? He never made it there and I assume that the committee of leadership around the Gamilas empire thinks that Domel was behind It all.

Some complicated issues happened on the Yamato side too. Not only are supplies starting to run short and the crew continues to get more exhausted by always being on action alert when scout ships check out their position (Ever watch the remade BSG’s first episode 33?), but the crew is getting restless from being stuck in a tin can for an extended amount of time. Even if they all lived underground on Earth at the moment, each one of them is used to being free and open on a planet for at one point in their lives. There is just no way around it. So a small chance of the Yamato finding supplies on a somewhat close by planet on their star maps means that some opportunities appear for some conspirators on the ship. Suddenly, our female science officer, Kaoru Niimi, who asked about investigating a planet several episodes ago is conspiring with security for one reason or another. The results of this will probably be seen soon.

Why? Because before the Yamato had time for any conspiracies to happen, they get involved in a fleet assault. Against them. What started from just a simple scout ship situation, became a small skirmish that forced the Yamato to jump. I think you know what happens next. The Yamato gets completely surrounded. You should be proud of our ship though. With Captain Okita appearing at the right moment, the Yamato powered up it’s shields and went straight through the Gamilas fleet. The Yamato did incredibly well. They even went toe to toe against Domel’s flag ship. Unfortunately, this is where that whole part one ship against many weighs them down. Eventually, they get close to being destroyed. They are only saved by the reasons that I explained a couple paragraphs ago.

So wow, what an action charged and politically driven episode this was. Once again, Yamato 2199 goes the extra mile. And you know what, I didn’t even say everything that happened. There were parts that involved Yuria Misaki being obviously possessed by the ghost again and checking out the Yamato’s technology and some Gamilas meetings about purity and controlling the empire through fear. Once again, very Star Wars like talks. I really liked this episode for the spectacle and the good character and pollical stuff. I just wish that there was more time to expand on what happened, but there is always the next episode. See you all then.