Hello everyone and welcome to my first installment of Mecha March. How this is going to work is that I am going to have one review of an older mecha series posted every Friday. There may be some other discussion posts that are mecha themed along the way and maybe some other surprises. All that remains to be seen. Who knows what else the future holds? I’ve been watching mecha series for the past few months and writing these reviews as I go along. These have been stored in a file for a long time, so it’s nice to see these finally go into use. Let’s have some fun guys!

Watching the Big was such a strange experience for me. I know that I watched this show as a kid, but I barely remembered anything about it besides the giant robots and Steve Blum was in the main role as Roger Smith. Yes, you can call that ironic considering that one of the main themes of this show is loss memories. Still, I don’t think it’s possible for me to have a better set up for rewatching The Big O. Without any preset expectations from a previous watch, I was free to take in everything with a clear and unbiased mind. Believe me when I say this, I had a complete blast watching this. Mostly in the first half, but the second wasn’t bad either.

Big O’s story centers around Paradigm city, a city of lost memories. Forty years before the show takes place, some major event happened that reshaped the world. The kicker is that nobody remembers anything about it because nobody has memories from it. Well, mostly nobody. Sometimes, a person who has access to lost memories shows up and causes trouble across the city. This is where our main protagonist, Roger Smith the negotiator, comes in to play. A lot of crazy things happen in this noir style show, but giant robots seem to be the answer to most of it. That’s the main idea of The Big O from it’s first seasons perspective with episodic adventures around the city, but the second half gets a lot more psychological and story focused.

The Big O is centered around two characters, but has a large cast amount of side characters that get a lot of development throughout the show’s run. The first main character is some one I named before in the last paragraph, Roger Smith. He used to be a member of the military police, before he quit his job for reasons that are never completely explained, but it does get hinted at. Now he runs around the city taking cases from different citizens of Paradigm city either to negotiate with some one or investigate missing people. While we don’t see a lot of his womanizing off screen; apparently, he is and gets called a louse quite a bit. Roger also has rules about not carrying a gun, though he has a large number of gadgets on him, has a car that fires missiles, and a giant robot named The Big O. You know, like you do. He also forces everyone that lives with him to wear black. 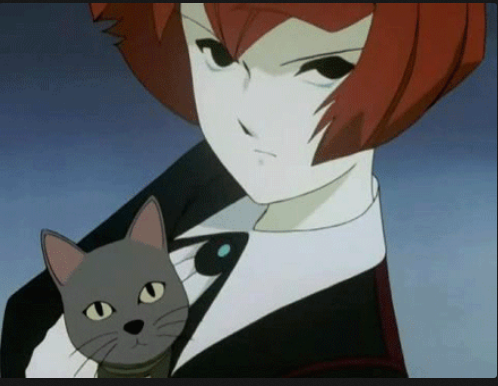 This brings up the next main character, Dorothy Wayneright, the Android. Taken in by Roger Smith in the first couple episodes, she is the character that gets the most development. Even though Dorothy’s expression and voice never change by a large degree, she gains a lot of emotional development. She gains a lot of feelings, becomes more human like, and helps Roger with a lot of his cases. She even becomes a negotiator herself when Roger gets kidnapped. Dorothy adds a lot of comedy to The Big O just by her everyday reactions with Roger Smith’s eccentricities and just living day to day as well. Kind of like she is the straight man or comedically serious to the insane sort of life style she lives in, which is always refreshing.

Then there are Big O’s side characters who are all great and deserve some sort of mention. Norman Burg is Roger Smith’s butler, but he never gets fully developed. I mean he is awesome from the way he carriers around heavy fire arms from time to time and fixes The Big O, but we never learn anything more about him. Next is Angel, The Big O’s Fem Fatale. She finds herself either working alongside or against Roger Smith during various episodes and their dynamic always adds layers to the show. The next character worth mentioning is Dan Dastun, the head of the military police. The only character who can truly be described as Roger Smith’s friend. He does his best to protect the city and can be considered a good police officer, but his police force is woefully inadequate against the show’s episodic threats.

I guess the villains come next. Some of them are worth mentioning like Beck with his Lupin like antics or Schwarzwald who provides some doubt about the cities infrastructure, but all of the other villains are way too one dimensional and typical. Alex Rosewater, the chairman behind the Paradigm group was a lot more interesting as a main villain when his motives remained a mystery. In the second half, he just turns into a big kid with a lot of money that just wants a giant robot too. Alan Gabriel isn’t interesting either, so a waste of Crispin Freeman, because all he wants to do is kill and cause chaos without any clear motives. That is part of the reason why Big O’s second half falls a little flat. While the main characters are still good, the story focuses on main characters that aren’t worth the attention or spot light. There are people who automatically compare The Big O’s cast to those as of Batman: The Animated Series and I can see this argument, but they are different enough for me to not call them direct copies.

Speaking of Batman the animated series, lets talk about The Big O’s visuals. From the way The Big O uses its shadows, its art design, and its character design, The Big O looks like Batman the animated series. No, I am not kidding you. Do a google image search on The Big O and then do the same with B:TAS and you will notice this fact is true. I looked this up and apparently Sunrise, the studio behind this show, animated quite a few episodes of The Big O. This makes a lot of sense to me, because Sunrise also used B:TAS’ style for an episode of Cowboy Bebop too. Still, I am alright with this choice. The Big O looks so different compared to any other anime that exists. It also sells the Noir style of story telling that The Big O uses. Oh, also the animation is great. I think that may be worth mentioning. Every giant robot fight is masterfully animated, because the motion is incredibly fluid and every robot feels like they have a lot of weight behind them. Solid stuff all around.

The second major complaint I have around this show is the giant robots felt completely unnecessary sometimes. Some episodes of The Big O’s first half could have gone without them. From what I’ve seen, each episode comes in two parts. The first part is centered around the current case that Roger Smith goes on and the second half is when a giant monster appears and has to be fought with a giant robot. The best episodes have these two parts linked together in a cohesive manner. Some episodes aren’t. As an example, there is an episode based around Dorothy finding a stray cat. She becomes very attached to it, but reluctantly returns it to its owners. Before that exchange can happen, a mad man on an aircraft flies around and kills the couple. The rest is spoilers, but you get my point right? The episode made the two parts work together, but it could have easily gone without the second half. Still, giant robots. As a mech fan, I don’t mind giant robots for the sake of giant robots sometimes.

I had a blast watching The Big O for what felt like the first time. I feel blessed and cursed by the fact that I don’t remember anything about this show from my Toonami days. Blessed because it felt new in the first watch kind of sense, but cursed because how the story is laid out is comparable to a lot of mech series from the late 90’s and early 2000’s. I’ve watched too many mech shows, so by this point it feels more formulaic then it really should be. The whole “build the show’s universe in the first half” and then “go psychological with a confusing ending” sort of thing. Still, The Big O’s noir style and great main characters help it to stand out from the rest of them. With all that said, I recommend everyone to watch this show. Especially to everyone who wants to know what anime was like in the later 90’s. It still looks great, especially with the Blu-ray release from Sentai Film Works and it’s just a solid show all around, despite some of its flaws.

15 thoughts on “The Big O: Negotiations with Giant Robots”