Hello usual followers and new comers. Today is a special OWLs blog post. Well, it is for me at least. Today is my birthday and a little gift that I am giving you today is explaining the origins of my blog’s avatar that I use occasionally. His name is Banagher Links and he is from a little ova series called Gundam Unicorn. He is a strong, young man that carries his own ideals with him through this series’ journey. Banagher had a few mentors around to guide him in defining the route he took his journey. From these figures spending time with Banagher to give him a semblance of their ideas and sometimes only a quick word of advice, each one of them is just as important as the other. Before we move onto the details, let’s talk about OWLS.

For those of you who haven’t heard of it before, what is OWLS you might ask. Well, that’s an easy question to answer. OWLS, also known as Otaku Warriors for Liberty and Self-Respect, is a group of otaku bloggers who promote the acceptance of all individuals. This is all regardless of gender, sexual orientation, religions, race, and disability. All about humanity for humanities sake. Each Month, our members are given a topic to write about and each of us approaches that through our own personal views. If you want to know more, please click here and look at the OWL’S Blog Page.

July’s prompt was suggested by one of our youngest members, Zoe, and brought to life by our great creative officer LynLyn. It’s called “Mentorship”. To be specific:

“Throughout our lives, we might have encountered someone that we admired as a role model or has guided us in some life dilemma. This mentor could be a teacher at school, a coach, a boss or team leader at work, or a family friend. Whoever it is that person impacted your life in a positive manner. For this month’s OWLS topic, we will be writing about mentors or mentorships in anime and other pop culture media. Some topics we will be exploring include how a mentorship impacted a main character’s life, the types of mentor relationships a person could have, and/or personal stories about mentors or mentorships.”

So, anyone of you remember that OWLS post I made on the original Gundam series last August? You know, this one? Probably not. Well, if you don’t want to click on that post, the original Gundam series is centered around a war that lasted one year centered around the colony-based Principality of Zeon and the Earth Federation. The year was Universal Century 79 and the Earth Federation inevitably won that conflict. Ever since the war ended, there have been numerous conflicts between the Earth Federation and some colonist with rebellious feelings still in them called Neo Zeon. There was the Gryps Conflict (UC 87), The First Neo Zeon War (UC 88), and The Second Neo Zeon war called Char’s Rebellion (UC 93). That last one has the largest influence in Gundam Unicorn. In UC 96, we have another conflict centered around a MacGuffin called Laplace’s Box, which nobody knows what it is but has the fight of the entire Earth Federation behind it.

In this seventeen-year time span, many children have been born and raised in a time period where war and blood were the mainstay of the day. This is the focus of Gundam Unicorn. Young adults who are tired of a conflict that has been carried on past by generations and work hard to finally put it to an end. Our protagonist Banagher Links is one of those kids. The main difference here compared to others, he has the power of a Gundam and the words of adults with a vision guiding him. That and Banagher Links is a hero that goes out of his way to save all the people that he can. Even without a Gundam, Banagher saved important people’s lives by putting his own life in harm’s way. Such a good guy.

(Beware of Spoilers from this point on) 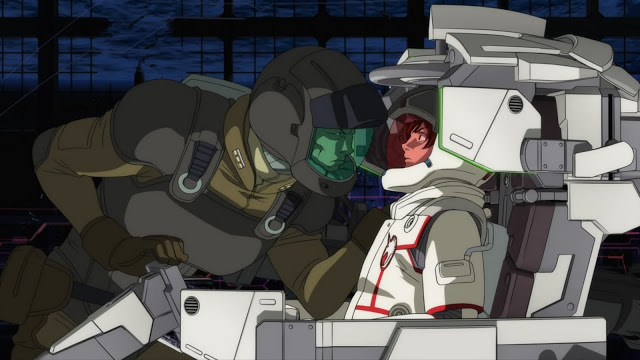 If there was a person that is farthest from Banagher Link’s point of view and perspective of being a colony teenager, it’s someone who is working for the Earth Federation’s military. The guy’s name, as you can tell from the bolded text, is Daguza Mackle. He is a commander in the Earth Federation’s Special Forces. That sounds complicated, but he is basically a marine. His job is to attack the inside of an enemy’s base and/or ship while mech battles are happening in space. Daguza has a rough exterior voice, but he has a soft spot once you get to know him.

So how did these two meet? After Banagher Links woke up from his first time riding a Gundam, Daguza Mackle was one of the people that interrogated him. That caused an instant dislike between the two. Banagher Links was being a stubborn kid that refused to see how involved he is in the current situation that is escalating between the E.F. and Neo Zeon. That resulted in Daguza Mackle yelling at Banagher to understand what the situation is. Their relationship felt similar to a father and son relationship, so that was kind of interesting. Banagher Links is the hot-headed son who wants to jump in and out of conflicts whenever he felt like, and Daguza is the father who is trying to ground his son. Banagher was an orphan sense he was young, so he never had a father/son relationship before. (Yes, I know he has a father in the series. He wasn’t there when Banagher was growing up though.)

So how did this teaching moment come to pass? Because of the ship’s captain, Banagher Links and Daguza Mackle ended up in the Gundam’s cockpit together as they flew toward a Laplace’s Box check point. Daguza explains in a calm situation that he is a cog in the machine of the Earth Federation. Since Banagher Links has his own mech, Daguza considers him a soldier. By telling his story and explaining the effects of his job, he slowly gets Banagher to understand how much weight he carries in everything that is going on. He has a Gundam in a universe where having a Gundam is important and means big things. Lives were saved and killed by people piloting a Gundam and here Banagher is flying around doing whatever he wants with his He doesn’t understand that meant until he spent time with Daguza Mackle. Banagher wouldn’t considering thinking about any of the decisions he’s made until that point. Reality can be powerful, right? 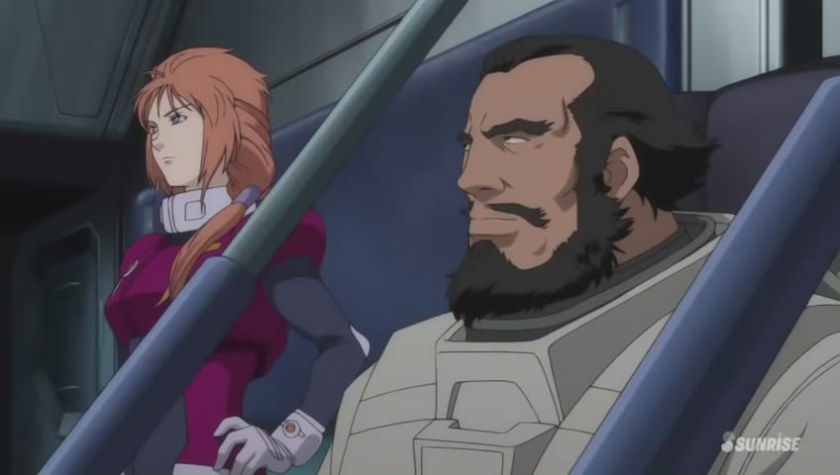 Jumping from the Earth Federation, Banagher gets some mentorship from Neo Zeon or “sleeves” next time around. This jumps into the Gundam concept of having good and bad guys on both sides of a conflict. Daguza was a cog in a machine, but Zimmerman and his crew are the kind that don’t wear uniforms and are full of strays that don’t belong every where else. Both of these men have fought in war for a long time and choose to keep fighting in their own ways. Mackle went for structure while Zimmerman went for freedom. The two display their differences even more, because Daguza could see Banagher as his possible son, Suberoa technically adopted a daughter, though it’s a lot more complicated then that, which shows that he is more in touch with his feelings.

Banagher didn’t directly meet up with Zimmerman until he crashed his Gundam into Zimmerman’s ship during re entry into the Earth’s gravity well. This encounter was made even worse by the fact that Banagher accidently took out Zimmerman’s best pilot. For some one who tries not to kill anyone, it hurt Banagher deeply. I don’t think that Zimmerman ever completely forgave Banagher, but the two spent time together while crossing a huge desert. Quite a standard Gundam thing, but it works here for the same reasons. Zimmerman kept Banagher going through the harsh environment and it was something Banagher needed during his time of.

Do you know what the most powerful thing was here? Zimmerman showing great sensitivity to Banagher’s feelings. Banagher cried a lot during the desert, but all Zimmerman did was watch and approving of it all because he didn’t couldn’t crying a weakness. Instead, it was a strength to him because Zimmerman can’t trust a man who isn’t try to his feelings. So not only was Zimmerman around to keep Banagher going during his weakest moments, he told Banagher in his own way that it’s ok to be himself. That’s powerful stuff.

Bright Noa is the famous Earth Fedeation captain of ships that happened to have all of the Gundam pilots ever appearing on them for some reason. I know that Bright’s appearance is complete Gundam fanservice (not in the sexual way) in the best ways possible for me, but I feel like Bright being there is complete validation here. He’s dealt with Gundam pilots before so he knows what they go through and how to deal with them. His knowledge that he passes on is simple, but it means a lot too. Bright Noa tells Banagher to follow his instincts because Banagher knows what to do next. Bright knows that Banagher sees things that are way beyond his own capacity, just like all of the other Gundam pilots. Those instincts haven’t proven any of those other Gundam pilots wrong, why would it prove Banagher Links wrong in anyway. (New Type Powers are made out of literal plot material after all.)

So in the end, Banagher get the best opinions of all words here. He is the voice of current generation of kids that don’t want to see the endless slaughter of warfare keep going pointlessly. He also listened to many voices of previous generations that wanted to change things in their youth but never got a chance to do anything because they were caught up in war. That is the best possible balance that can be found in all of this misery. At least in Gundam Unicorn, Banagher and friend’s exploits worked. The war was stopped for now. Might not be true for certain future installments of the Universal Century, because war is always cyclical and never ends in universe, but what can you do?