Show of hands, who has heard of the Lupin the Third Franchise? Maybe this exercise is pointless because this is a blog post scheduled weeks ago, but if you are an anime fan from the United States, I doubt you would have raised your hand anyway. That’s pretty sad, because Lupin the Third is such a loved anime franchise in Japan and Europe. I mean, it’s ran for over fifty years for a reason.  I’m not saying that I am a Lupin expert, because I haven’t seen all of the lupin media that has ever been produced, but the exploits of the smart yet dumb thief, Arsene Lupin the Third, and his friends: Jigen the gunslinger, Goemon the samurai, and the sexy feme fatale Fujiko Mine are a lot of fun. These four characters have been robbing a large number of places around the world and sometimes each other for over fifty years now. Zenigata, the ICPO man that chases after them, should just retire by now because he’s never going to captured them for an extended amount of time.

Can we talk about how this franchise influenced other anime and why it never stopped? This one guy that you may have heard named of Hideo Miyazaki has had his hands into this franchise when he first started out and Cowboy Bebop was influenced by Lupin the third as well. That’s only two examples of how deep this franchise goes. Who knows how far down the well this goes. What makes it keep going you may ask? As an amateur anime critic that only has seen some parts of this franchise, I think it’s the fact that the core of Lupin never changes. If you look at the latest Lupin offerings, the situations our four characters are thrown in may change, but you can recognize their voices and their personalities anywhere. A lot of Lupin properties have gotten more political as of late, but you can take the same characters from Part 5 and put them in part 2. All you have to do is change Lupin’s jacket color, and you wouldn’t tell the difference. The same could be said for the thing I should be talking about now, Lupin the Third: A Women called Fujiko Mine.

This Lupin the Third addition is a more adult oriented venture. You could tell this because this show is inherently darker then a lot of Lupin works and it doesn’t hide any nipples on female breasts anywhere in this show. From the opening to whatever is shown on screen, this anime absolutely celebrates Fujiko and her amazingly, anime proportioned female body. I should also mention that the opening isn’t a song, but a dialogue that celebrates and interprets everything that a femme fatale is about. The narrator has an amazingly sexy Japanese accent. I love how this woman says Sexy. It’s just sexy, ok? This show is Fujiko’s and she is more then up to the challenge to star in it. We see how the infinitesimally desirable Fujiko uses her sexuality and societies standards around women as a weapon. I mean, she seduces a lot of people in this series. Not only men. I don’t feel like it’s my place to talk about this because I am a shy, straight man writing about anime on the internet, but there is such a difference between her providing fanservice on screen because she wants to, having a harem male character trip over a female character and unintentionally causing us to see that female naked, and the camera wanting to leer on its characters during special moments. It’s all about the character agency. Two are inherently creepy in nature and the first one is our character just being our character.

I should also mention that A Woman Called Fujiko Mine (AWCFM for short) can be considered an origin story for the whole Lupin gang as well. That more then works here, because Fujiko was always the more dynamic character when it came to Lupin plots. How each of the gang acts around her more then says what kind of character each of them is. Lupin is a fun character that has the show named after him, but it’s pretty clear that how any episode changes is based around how Fujko’s allegiance towards these three people. Lupin treats her like a treasure that he has an absolute desire to chase, Jigen sees Fujko as a nuisance and wonders why Lupin is after her, and Goemon is the silent type who is very quiet about his attraction toward Fujiko. Perhaps I should also mention the infinite amount of respect that Fujiko and Zenigata have for each other as well. I already mentioned that these characters haven’t changed over fifty years, but it’s always nice to see how that an old dog can always play new tricks. Episodic anime series are like that.

AWCFM’s first half was nearly flawless while also following Lupin’s standard episodic formula with a twist. The twist is that Fujiko Mine always took the front seat in some way. There are an infinite amount of ways she can do that. From pushing and/or manipulating Lupin and Jigen so she could end up on top or working as a governess from some one’s household to wait patiently for the right moment to steal a pricelessss gem, to even stopping the Cold War from becoming a hot war while also taking the role as a report, what you can do with Fujko is endless. I’m glad AWCFM’s first half took advantage of this aspect as much as it could. I just felt a little disappointed with the second half. It was a lot more story focused around Fujiko’s origin (kind of) AND Lupin took center stage instead. I know that Lupin’s name is in this anime’s title as well and he is amazing, but this is Fujiko’s anime not his. Maybe they could have tweaked a few things here and there and that would have made the whole thing a little more consistent. I can say that the 2nd half did introduce something even scarier then the Disney “It’s a Small World” Ride and that takes work. Still, by being weaker, I can’t say that it’s bad. It was filled with interesting stuff that made me want to come back for more. 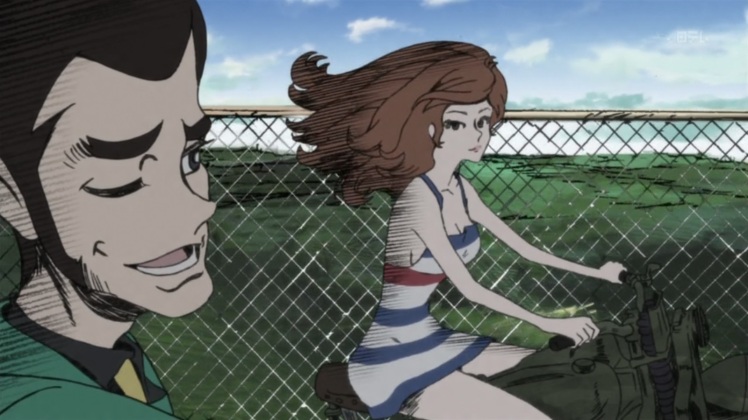 Let’s just spend a minute or two or ten to discuss how beautiful this series is because OMG, I couldn’t take my eyes off the screen. A Woman called Fujiko Mine has a more noir style to it and the art design plays around with this aspect as much as it could. From each shot looking like a gorgeous painting to how each show is framed to how it uses shadows, there is so visual goodness through out the show. Even the art style between of the original lupin designs are doctored up a little bit to fit everything as well. Should I also mention how this show uses black lines on characters? It may be of putting to some people, but it works here. There are some obvious cg objects here and there, but they are well hidden in the show’s noir style. That’s the best way to use it. Lastly, the animation was incredibly fluid too. The gun slinger moments, sword moments, running over the tops of buildings and in the streets, and whatever else you can do with these characters looks extremely good. It’s obvious that this was a top tier production by people that absolutely love the Lupin franchise.

If you have never watched a Lupin series, I think that this is one of a few places a new watcher can get into it. I’ve had the best Tuesdays for a while, because I watched the airing part 5 and Fujiko Mine in the same day. Both great works from production teams that absolutely loved this franchise and want to provide their own spin. What are you doing? If you like what you have heard, go check it out. See if it’s your thing. There is nothing wrong with at least getting a feel for this older franchise. Do you know what I want now? Is it possible to get a Faye Valentine series like this? You see, she is another one of my long term anime crushes. While I do believe that Faye Valentine got a lot of wonderful moments and development in Cowboy Bebop, I would like to see her own adventures and maybe even see the rest of the Bebop crew again. Might be a good way to provide a spin to a possible Bebop sequel. I’m sorry, this post is about Fujiko Mine. You can tell how much I like this series just by the fact that I don’t have much say against it. See you around, guys.

13 thoughts on “Lupin the Third: A Women called Fujiko Mine – Sexy Thieving Times”