Lately, I’ve had such an excellent run in quality when it comes choosing “older” anime to watch. Chihayafuru was beyond great for me leaning towards being one of my favorite anime that I’ve ever watched. Key: The Metal Idol was fantastic as well and made me think about some things I haven’t heard in a while. Then there has been Natsume’s Book of Friends that has been blowing my mind everyday for past couple months for how great it is. Believe me when I say that I wasn’t ready for what Natsume’s Book of Friends was offering and I gladly accept it every day. Then we have this show. Well, nothing is perfect. Despite all the good things that I’ve heard about this show from a large amount of people and the internet, nothing about it clicked for me. NOTHING. I think I understood what the series was going for as it was messing with usual school anime clichés, but I don’t think the series achieved it in any sort of believable manner. My Teen Romantic Comedy is Wrong, As I Expected was just massive disappointment for me.

(For the rest of this post, I am just going to use the word “SNAFU” as the title when I discuss this series, because the light novel title is too long for this purpose.)

From a plot and character perspective, Snafu is just like your usual teenaged romantic comedy. It’s a high school anime. Quite a few of those exist in the world of anime stuff. We have our supposed main male main character by the name of Hachiman Hikigaya, nicknamed Hiki for short, who is forced to join this club by an abusive teacher whose only member is the ever so smart and beautiful, Yukino Yukinoshita. A bubblier character by the name Yui Yuigahama joins the club ever after to provide some fresh air from the other two sad sacks. The club is called the service club and their purpose is help individual people out with whatever problem they want to solve. It’s a good concept for an anime. A great way for our characters to explore the school, build its cast through special interactions, and even develop our cast by seeing how they solve problems. Fun stuff that I like. Unfortunately, the quality of its execution is something to be desired. 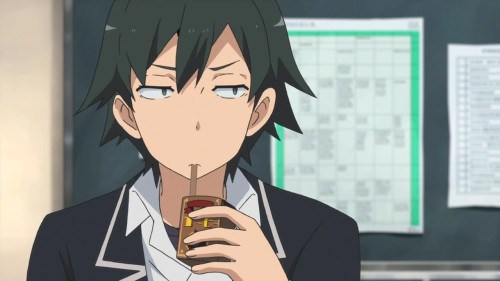 One of the show’s biggest problems is its nature. It’s cynical nature and how it tries to be smarter than anything else. Snafu is drowning in cynicism and actively does it’s best to stomp down on anything positive and sincere as hard as it can. Hikigaya is an example of that. He is the loner of his class that looks down on everything in society because he thinks he’s smarter then everything else. Because of that, he has a negative opinion about everything and feels like it’s his place to comment on everything. It’s like the rest of the cliched character tropes. That’s right, which is not something that I am a fan of at all. Just because an anime uses cliched characters and then makes fun of them doesn’t mean that the anime is smart. It just means that you have a cliched anime that has the thin veneer of being smarter then your usual anime. Then there is also the fact that he solves every problem by taking the most negative route possible and that’s incredibly boring. This wannabe edge lord knows nothing but the edge, which is why I refuse to accept that he has a definable personality.

Let’s talk about those side characters while we are on the topic of them. None of them get any significant development. There is a cast of characters that HIkigaya and the rest of the service club always seem to hang around for some reason, but none of them ever get any development and most of them don’t have any semblance of a personality. Hakayama is one that is given a personality and all he is is the goody goody that plays a little bit of a foil to Hikigaya’s cynicism. Nothing he tries never works, as I would expect. There is also that chick whose name escapes me whose was hyped up as a big threat for Yui at the first place and then just turned out to be a nothing. That seems to be a common thing. There was the girl who worked hard during the night for some reason only to have the simple answer of going for a scholarship instead. The typical otaku characters make a presence to with one being a light novel fan and the other being a Yaoi girl and they aren’t developed either. They just are there to insert the typical otaku things that every anime needs to have for some reason. Should I also talk about the other characters that have a focus but are never developed either? Nah, because they don’t do anything besides make some sort of conflict for everyone else. Conflicts that don’t amount to anything. 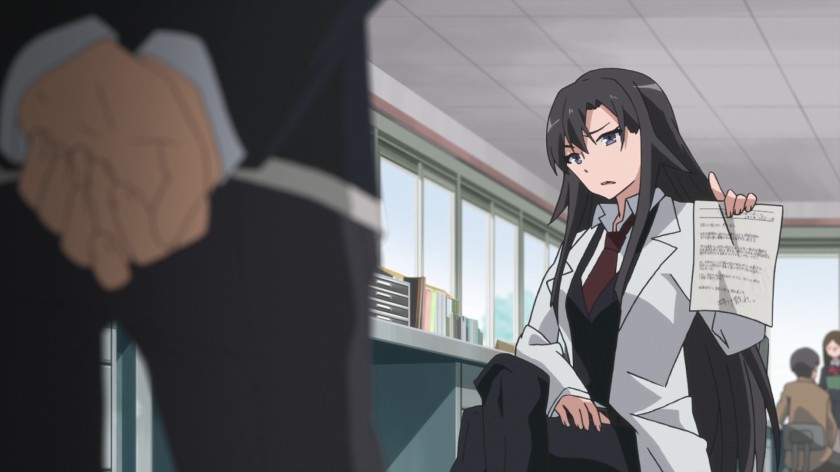 Another problem I have is that nothing ever feels like it progresses in any sort of way. There might be some slight shifts in characterization here and there, but nothing significant or worthy of note as far as I’m concerned. That conflicts appearing out of nowhere is the nature of the show, because people are supposed to give their conflicts to our characters to have a show. The problem is that none of these problems change our characters in anyway. There was a small bit of conflict with Yukino which involved her being more reserved then usual and then eventually returning to normal after a small conflict. Not even reputations centered around our protagonist solving problems in his most negative and foul way sticks. After the school festival, he was supposed to be the most hated person in school for making a girl cry. The episode after centered around a girl not knowing him and nobody else caring about what he did. Maybe that line from Yukino was just a line but seemed to have a lot of relevance behind it. It’s not like Yukino doesn’t say mean things

Some people may think that I’ve missed the point of this show entirely and that’s possible. At the same time this just feels like a show that tried to copy a lot of elements of what made Haruhi Susumiya popular without knowing anything about how that show worked in the first place. Or maybe not, because apparently Snafu is pretty popular in our particular anime realm. The difference between the two shows is the fantastical elements and the charm. Kyon was relatable in Haruhi, because he was responding to Haruhi’s infinitely energetic personality that caused trouble for her S.S. Brigade and literally everything else in existence plus the fantastical characters he was facing. Now those people could be tropes too, as Haruhi called them out on each of them, but there was something special about them that made each character memorable. To me, Snafu doesn’t feel like it has its own personality at all. It’s just playing everything straight and throwing female characters into fanservice and/or appealing costumes because it wants to. Snafu still seems to be pointless to me. 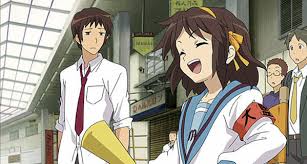 I do have to say something positive about this thing, right? Ummmm, it looked nice. From an art and animation stand point, the show was breath taking to watch. The art style clearly defined Hikigaya’s personality and each of the other characters at least have some defining features that made them special. Each of the background settings were unique and interesting to look at too. When characters moved or one reason or another, the animation behind each scene is amazing. Scenes when our characters are doing tennis or having wind blow against people’s clothes for some reason. It’s all good stuff. A higher quality then I ever expected because of a series that is supposed to be a romantic comedy/ slice of life series. I was honestly stunned by all of this.

So I think you know where this is going. I see all these particularly high ratings for this show and I feel like I might be almost alone of this, but I just didn’t like this show. I’m not a huge fan of cynical media in the first place and this show jumped too far for me. It jumped the shark. I say this knowing that Girlish Number was created by the same person and I actually did end up like that show. Girlish Number did have cynical main characters too, but they had much more interesting personalities and a more interesting dynamic between them which makes the whole show work. Here I was so put off by the first season that I refused to watch the second. That leaves me in that not knowing mode of whether the anime improves from here or not. You know what, I don’t want to know. Clearly, this anime was not meant for me. Consider my curiosity about the show to be filled. Time to move onto something else. What could that be? Well, I think you will all know soon.