It’s been three years since I’ve last watch Outlaw Star and it’s one off the most memorable and yet unmemorable shows that I’ve ever watched. I more than remember a lot of the story and its plot elements from when I originally watched in on Toonami unlike The Big O. It’s just that there is so much I forgot about it. I did remember the characters quite a bit because they were all incredibly memorable, just not everything plot and/or story wise. All that story stuff comes from taking the many concepts and plot elements that can happen in a science fiction show and jamming them together into one series named Outlaw Star. Unlike the other shows in this 1998 space western trio like Cowboy Bebop and Trigun, Outlaw Star never successfully kept its own identity. In my mind, that is both a detriment and benefit to the show as a whole. 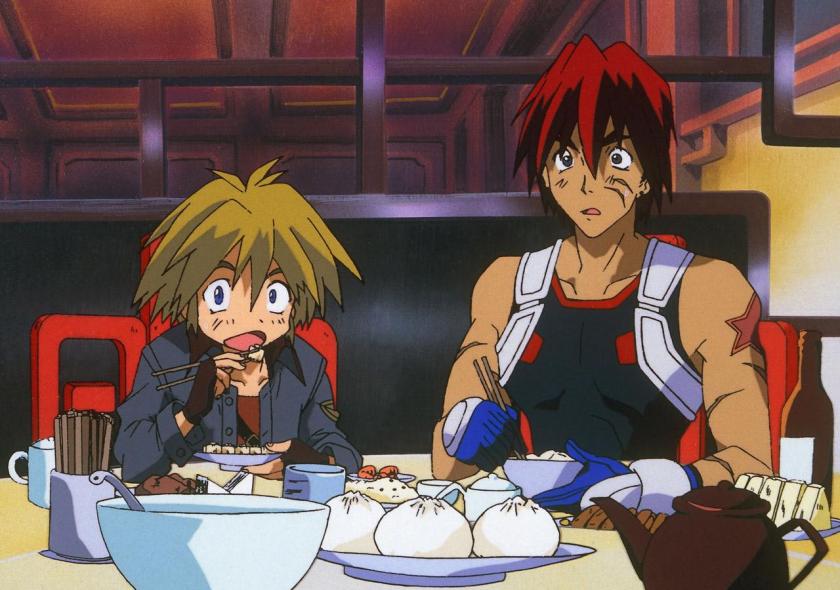 Outlaw Star’s beginning is the most memorable part of the show for me because it’s the most thematically coherent the show ever is. It also sets up the main character’s conflicts the best that any show could ever do. The show’s first five minutes explains the main characters personalities, what their job is, and how skilled they are. Gene Starwind is the red headed main character that is a womanizer and also a bad ass that knows how to fight and destroy androids without even trying. That’s what he does in the first scene which also then follows along with Gene hugging the barmaid after the attack and grabbing her ass. Jim Hawking his young assistant/friend/partner who is more mature and keeps their organization together comments on the bounty money, Gene grabbing things he shouldn’t, and ends up dealing with all the money for the damages caused at the bar and business fees. You can’t ask for a more perfect opening character moment then that. What happens next drives the show in a different direction. You know, from land to space.

The introduction of Hot Ice Hilda, the bad ass female bounty hunter that wears an eye patch, is the character the changes everything the show is about. She starts out wearing a disguise and asking for simple body guard work from Starwind and Hawking industries. What happens afterward is what happens when the craziness starts. Hilda reveals who she is when the Kei pirates who use Taoist magic chase after her. (It’s not the first time we’ve had magic in a sci fi show, but it doesn’t show up that often). This immediately gets Gene and Jim involved in her situation. It also leads to the introduction of the show’s first female main character, Melfina. She is a Bio Android found in a box whose current purpose is unknown and Gene Starwind’s caster gun that fires literal magic shells. It’s so cool guys. Moving quickly, we learn that Gene gets space sickness due to his tragic backstory, and the death of the Hilda after the crew picks up the mysterious ship called the XGP. Her death motivates the crew to move forward that also introduces another villain was involved in Gene’s backstory, and the beginning of the Outlaw’s journey toward the mysterious Galactic leyline. These opening episodes were as hype as hype and dramatic as the show gets.

So I did mention how the death of Hilda was dramatic and provided some enemies that Gene Starwind and his gang have to fight, right? With the introduction of the last two main cast members, the anime’s story became more episodic and then became goofier in tone. I wouldn’t be usually be a fan of that, but I like Outlaw Star’s fluffy material. Also, it’s not like they ever forgot about Hilda and what she wanted the crew to do, it was just swallowed up by its episodic nature. Also, I just like seeing this cast together because they are fun. Gene Starwind, Melfina, and Jim first meet up with their next crew member when they protected their primary client/financial benefactor from her. This cast member’s name is Twilight Suzuka, the assassin that wears a Kimono and can cut through anything with a wooden sword. Gene defeated Suzuka which resulted in Gene becoming her assassination target. Of course, she never actually does that and just flies around on the Outlaw Star with them for fun. Thus we get the calm and collected cast member of this anime. She doesn’t always take part in the crew’s jobs and shenanigans, but I was always interested in what she did and who she interacted with.

The last crew member, Aisha Clanclan of the CtarlCtarl, joins the crew after many cases of hilarious antics. Our giant, childish tiger girl loses her place in the CtarlCtarl empire by being humiliated by the Outlaw Star’s crew on multiple occasions and ends up serving tables and washing dishes at a lot of restaurant. All of that in hopes of eventually get revenge at Gene and finding out where the Galactic Leyline. You know, the thing that the Outlaw Star didn’t know either. Aisha joins the crew because their ship has a better chance of finding anything about the galactic leyline alone. It’s a something that is a little flimsy of an excuse, but it’s just a flimsy as Suzuka’s reason for joining the outlaw star’s crew. Also, I liked her presence because Aisha is just a fun character. I’m glad both of them stuck around. These characters develop unique relationships with member of the cast. Suzuka plays the cool big sister to Gene and gives him advice when he needs it. Aisha brings out Jim’s more childish nature so they understand each other on a larger level. Nobody really changes though. The only character who changes in anyway is Melfina and that isn’t to a large degree. She just finds out what she is designed for. That’s about it. Still, the characters are defined enough that they have enough layers to feel like realistic people. Outlaw Star’s characterization is on point.

I did write about this already, but I think some of this stuff is worth talking about. When I say that nothing is resolved or the show focuses on more episodic stuff, that isn’t necessarily a bad thing. Not necessarily a good thing either. For one thing, everything in the beginning of the show is still addressed in some way. Maybe it’s not as focused as it could be on those elements, but they are still there. Hilda is never completely forgotten. We also get some space hijinks! Space races, psychic cactuses getting people to buy ice cream to experiment with their power for their eventual up rise, dinosaur cops with 65+ million years from the making, space treasure hunts, strongest women in the universe contests, and so many other things. The Starwind and Hawking Enterprises finding jobs to fund their exploits and screwing them up is half of the show’s fun. I love their moto in which they claim to fix anything from tractors to relationships. It’s a show that takes its cake and eats it with some more success than most shows call pull off. Fun times.

The visual aspects are more then outstanding most of the time. The character designs are more than distinctive with their profiles alone. Their hair color, hair designs, and clothing stuff plays into this specific aspect even more. The characters do go out of model pretty often too but oh well. I still love it though. Then the many backgrounds are so well detailed and help explore Outlaw Star’s universe even more because everything has this old feel to it that makes it feel lived in. Then there is the action stuff. This is a show that has tons of space fights involving ships that have grappler arms wrestling each other in space. Then there are also the other space battle things with ships flying all over the place at high speeds firing missiles and things. Space stuff always look great, even if they are using half assed mechs (That’s what I call grappler ships.) Then there the hand to hand fights. Those just look ok most of the time. It’s not like the choreography is bad, but the show minimalizes the frames in as best as it can to at least keep the affect behind each blow. Not that I can complain much, because there is action almost very episode. Not every fight can be top notch. Speaking of other visuals…

For me, the most interesting part of this watch through was finally watching the banned episode 23 of Outlaw Star. I mean, the episode couldn’t be shown only on tv during it’s Toonami run because of its content. I didn’t see the second half of the show during my last watch through for some reason. Most of the episode could have been shown on Toonami, because it’s a spa episode that takes place on a hot spring planet. They put digital bikinis on characters in Tenchi Muyo back in the day. (Don’t judge me) Toonami could have done the same thing here. It’s the end of the episode that makes it worse. Gene Starwind goes to a female monk’s palace just to take a video of her stripping. He has to do this in order to get caster shells from two perverted male monks. To my surprise, she actually does it. We are given a scene that involves Gene and the two monks watching her strip her clothes off on a tv screen as a count down timer to a bomb was clicking down. Yes, she takes off everything and it’s the most WTF scene that this show provided. I mean, episode also had shots of our girls naked in the hot springs too. Outlaw Star has never been this fanservice forward, so it doesn’t fit with the show at all. So strange. I had to at least watch this episode once. 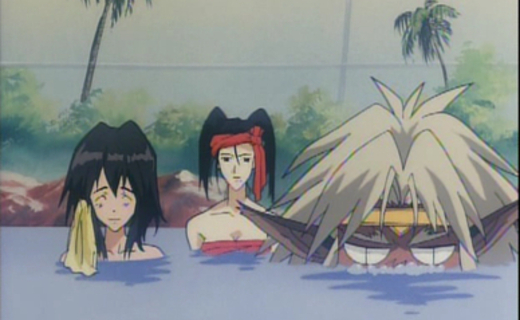 In the end, I would definitely recommend Outlaw Star. Especially for people who are looking for something that has 90’s space opera. If you like Firefly, you will like this show. I think Whedon pulled some things from this show. While I am disappointed by the show’s actual destination, because the Galactic Leyline isn’t that interesting to me. It’s just another plot point that I’ve seen all over anime. Still, it’s the journey not the destination that makes this show what it is. This cast’s journey is anything but exciting. Maybe it isn’t as memorable as Cowboy Bebop and Trigun because it doesn’t have a solid tone, but it’s pure fun and has emotional pay off to make it worth it. I’m sad this show never had another season. it really needs it, but it’s too late now. It’s been too long for Sunrise to even consider a sequel.

(All images come from google searches)