I won’t like that this list started off with a certain famous episode in Outlaw Star that I mentioned in my review from last week. I covered it in a quick list sentence and that didn’t seem enough. So here I am to discuss that bit of shenanigans in more detail and throw in some more craziness while we are here. Why not? Let’s have some fun. It’s not like I don’t try to make my posts entertaining, but sometimes it’s just good to have a pure fun post. Especially when you can consider this post vaguely Halloween themed as well. Talking about weird creatures counts right? Kind of? Maybe? Eh, close enough.

There will be some spoilers in this post, but not big enough to spoil any series. In fact, I think they might get you more interested in a series maybe. 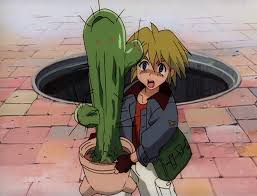 Outlaw Star is a show filled with a lot of crazy things in it. We have general space craziness that science fiction series are known for and police officers designed from 65+ million years of dinosaur DNA. Despite those things, the episode centered around the psychic cactus takes the cake here. Or should I say…Ice Cream? That’s right, a psychic cactus is using its powers to get people to buy average tasting ice cream. The reason its doing that is because it’s a higher being of existence that is using this exercise for it’s take over of humanity later on its life space. I just love this to death. This is what anime is made for after all.

Remember the Cowboy Bebop episode titled “Toys in the Attic”? You know, the episode centered around a random creature crawling around the Bebop and infecting some of the cast members? An episode that turned into an Aliens reference with Spike being the action hero like usual? Well, it turns out that was because Spike hid a special kind of lobster away from the rest of the crew in a fridge in the back of the Bebop for a year or two. Make sure your food stays fresh, people. You will never know when it will come back to bite you. Literally.

The rock with a spirit – Natsume’s Book of Friends

I feel like I mentioned this before on a few posts now, but I am still in aww of it. Especially since this episode was another stand-alone episode that doesn’t add much to lore of the show, but I find it cool and kind of fun. A rock that gains sentience because people revere in in some sort of religious way is just hilarious to me, even though he was mopey about humanity when talking to the fox boy. What can you do? He wasn’t supposed to exist in the first place.

The B.R.A.I. or the Biological Revolutionary of Accelerated Intelligence are the main threat that are challenging the human races existence in the anime series last hope. There is more then that behind the scenes of the series, but you have to watch Last Hope for that. The ridiculous nature of the B.R.A.I. is what this post is about. Do we talk about the former pet falcon B.R.A.I. who is controlled by his owner through thought control or are lizard with a sniper rifle which has the main protagonist crew’s sniper’s dna? Either way it’s ridiculous and I love it and them.

The Viruses/Bacteria/Bad Things – Cells at Work 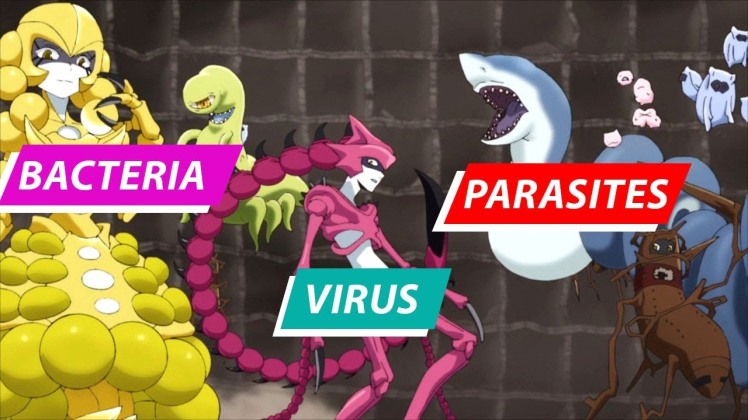 I am cheating here a little bit, because this show is about humanizing cells and the functions of the body in the first place. To be honest, I ran out of things on my mind to write about for some reason. Still, for a race of cells that we are supposed to identify with because they are human, the forces that attack these cells are strange yet fun to look at on design levels and personality levels. Besides the adorable platelets, red cell, whit cell, and some other cells, the opposing forces that they must fight are the appeal of watching the show to me. I always like to see what kind of designs that they show next. They are so cool!

And here we are. One of my favorite parts of Halloween are the strange creatures that people come up with. When it comes to producing animal and creature designs, nobody does it better then anime. Next week’s list is going to be more psychological thriller focused.