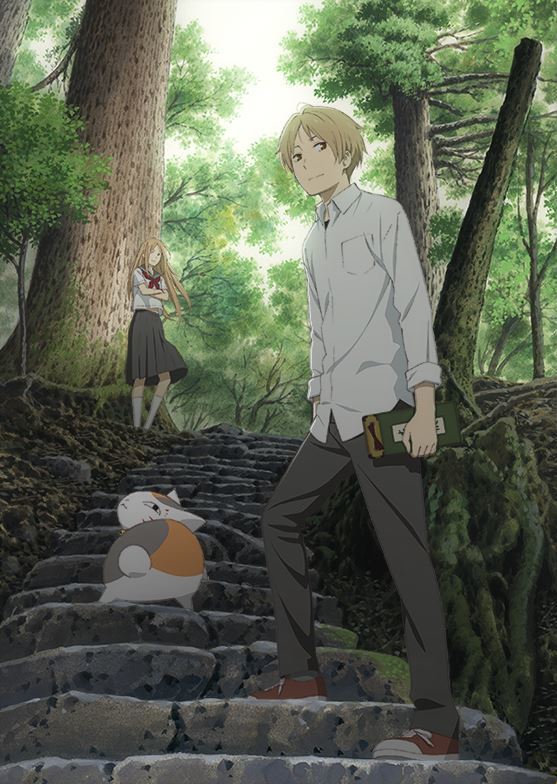 It’s finally time that Natsume appears with more earnest on my blog. Not just segments talking about the show from one level or another, but to talk about it honestly and up front. This is the first post of a collab I put together with a lot of people’s help in making this happen. I spent a few months’ time watching all of Natsume’s Book of Friends that was available on Crunchyrolll. This show has been a life changing experience for me in some ways. I will be writing a review of whole show at some point in the near future, but I don’t think that a singular post is enough for any of us fans to explain how we feel about the show or what it means to us. Please Enjoy this first post of Natsume Week.

Walking into Natsume’s Book of Friends, I had some idea about what I was walking into. Having watched shows with similar premises like Mushishi and Kino’s Journey before, I was expecting this show to be something like that. You know, a random traveler or master of trades walks from place to place to either solve problems in whatever place the travel shows up to. Man, I couldn’t be farther off the mark. Natsume’s Book of Friends turned out to be something much more sentimental and relatable then that. I say this in spite of the fact that Natsume’s super natural premise that by all means shouldn’t be as human and relatable as it is. Natsume is incredible and so wonderful. I am glad this show exists.

Natsume’s Book of Friends is a show centered around a seemingly normal high school kid named Takashi Natsume. He’s live a hard life of being passed around from relative to relative due to causing trouble for some reason unknown to them. Well, it’s obvious what is causing the trouble right? Natsume has been able to see youkai and spirits ever since he was a kid. The very fact that he can see them has caused him all sorts of trouble. When a yokai notices that a human can see them, a few of them have a habit of having some mischief with those poor humans. Natsume was a victim of that and because everyone around him couldn’t see the youkai, you kind of get the conclusion that everyone would make, right? Yeah, Takashi suffered from being passed around from one house hold to another after his parent’s death and it’s impossible to blame the families that didn’t want him because they had no way to understand him. Even the Fujiwaras, who Takashi is staying with right now, don’t understand this one side of Takashi’s life either. 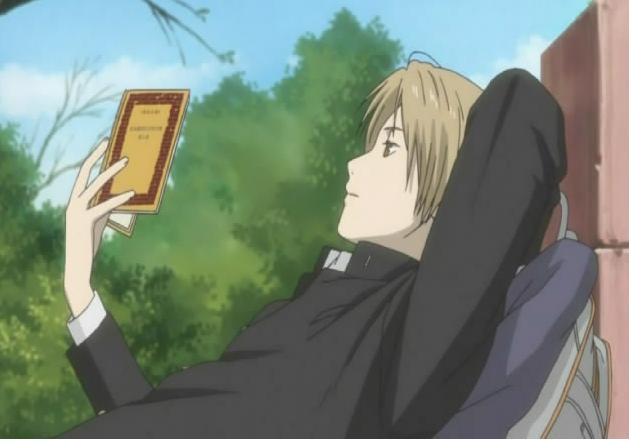 With that set up in mind, Natsume’s Book of Friends starts when he discovers the singular item that was left behind from his Grandmother, Reiko. The Book of Friends. It’s not an address book or a phone book, though it can act like a phone book. It’s a book of yokai and other spirits names that Reiko Natsume has collected over her life. You can call yokai to do your bidding for you or even kill them when lighting the thing on fire or shredding the names in some way. By just possessing it, Natsume has made himself an even bigger target for yokai. Especially yokai that want power. If you had a list of who knows how many Yokai, what would a normal person do? Probably use them as their minions in a quest for power? Possibly get rid of it as soon as possible so they are no longer a threat? Takashi is obvious the best type of person ever, because he does the exact opposite of what yokai and humans expect him to do. He’ possibly the best human ever.

The main premise of Natsume’s Book of Friends at the start of the show was Takashi giving yokai their names back. Names that were kept in the book for who knows how long I feel like many of them were surprised that Natsume freely gave them up so easily. The only thing that cost him his energy. We see the results of him returning names to Yokai during classroom scenes where Takashi has to try his best to stake awake in. I’m surprised by how often that he succeeds in this and does passably ok at school. Living a double life is hard, people. Don’t do it unless you know how to play the game and/or are Batman. Anyway, this results in him somehow getting a protector in some ways that is the eccentric Nyanko Sensei, who is amazing, and opens up his world in exploration of the yokai world more when he isn’t as afraid of it as much anymore. Natsume starts his pacifism run here. 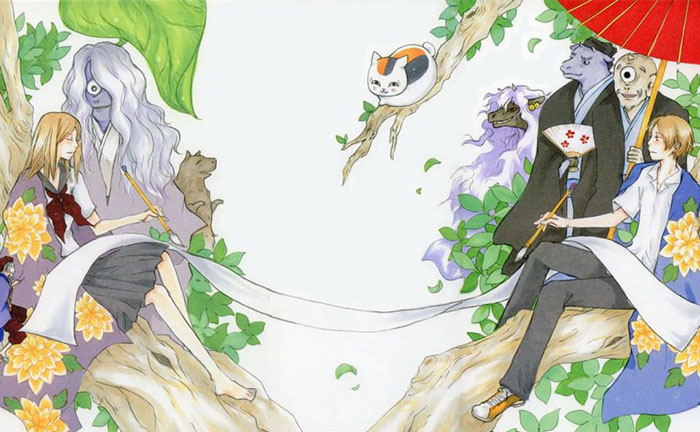 Takashi Natsume has a habit of encountering many types of yokai in his journey. I mean, this show currently has six, thirteen-episode seasons when you the ovas, so he encounters a lot of yokai. Some friendly, some that want nothing to do with him, and some that either want to cause him harm because of the book that he possesses. Yes, he survives all of them. More them survives them honestly. He does encounter a lot of situations that could have easily been solved by destroying the yokai that attack him. Something that has been commented on directly to him by Nyanko Sensei and many other yokai friends he has made along the way. There are many times that Takashi is given the option of not getting involved in the conflict in the first place or destroying the yokai that is causing trouble. Of course, Natsume takes the third option and finds a way for all parties involved to be at peace with each other. He does have a habit of putting his body at risk in the process. Something something self-sacrificing comment here, but that is for a post for another time.

The biggest aspect of this is that Natsume values yokai as much as he values people. He has spent a lot of his time hearing the stories of the large amount of yokai that are in the wood near him or just passing by, helped yokai that needed it, and indulged in a lot of the culture that yokai represent. It’s very clear to anybody watching the show that they are not animals who are barely conscious. All of them deserve to be more then mistreated, destroyed, or forcibly made into a servant. All of them deserve more than just a little say in what happens to them. Takashi has faced many powerful parties in exorcist meetings like the Matoba clan that only see the yokai as things of evil they need to either be controlled or destroyed. That clan does have their reasonings for this, but this is obviously from the opinion of people who have only seen negativity from the yokai and have never talked to them personally. It’s not like Takashi hasn’t faced his own personal horrors from the yokai too. He’s almost been eaten or torn apart in a lot of occasions. It takes a special sort of person like Takashi who can push back his own fears for the betterment of others. Natsume is great stuff, guys.

It seems like that aspect runs in the family. Through a variety of flash backs of how Reiko Natsume was the same way as Takashi but also different at the same time. For one thing, Reiko was not even the same kind of person that Takashi is. While Takashi works hard to find a balance between his human life and his many, many encounters with Yokai, Reiko seemed to like living in solidarity. She was pushed aside by a lot of people she met and she in turn didn’t try to connect with anyone. I mean, she obvious had to make a connection with someone otherwise she wouldn’t of had a child, but that seems to be a special case. On the flip side, Reiko didn’t connect much with yokai either. Yes, the book exists, but it’s obvious that she didn’t have a lasting contact with them either because it took those yokai many years to search out the book and its successor. Reiko has helped yokai too, but in spite of it all. When she does help, it seems like she is able to get everyone to feel positive about each other and happily live out there lives since that point. Reiko simply stays in an area until she gets involved in their business, then leaves. What I’m saying here is that Takashi is interested laying down roots and letting them grow.

At the end of the day, Natsume’s Book of Friends is not a shonen action series. If you want one of those, Ushio and Tora is a fantastic shonen series that has a very similar premise with a 90’s shonen sensibility, but that’s something for another day. Takashi Natsume has no special abilities beyond seeing yokai so he has no special attacks, no power ups, or anything that would change the show in any particular way. That doesn’t mean that Natsume’s Book of Friends doesn’t have action in it, because there are some awesome action cuts here and there. But it’s still a very natural show with realistic sensibilities behind it. Natsume is a normal kid with some high spiritual ability that puts himself in danger when he really shouldn’t be and the world is better for it. Takashi’s pacifist way of life might gravely hurt him someday, but he doesn’t seem interested in stopping anytime soon. We should all be thankful for this hero that protects his friends and everyone else from the things they can’t see.

Thank you for reading this everyone. If you want more, there is going to be more Natsume Posts from different creators all week.

-Tomorrow we have Keiko’s Post which you can find here..
-Wednesday we have Karandi posting about isolation and loneliness in Natsume right here.
-On Thursday, Irina is going to give us a lecture right here.
–Arthifis is on posting on Friday about friendship in Natsume.
-Lastly, Neha is posting up on Saturday.