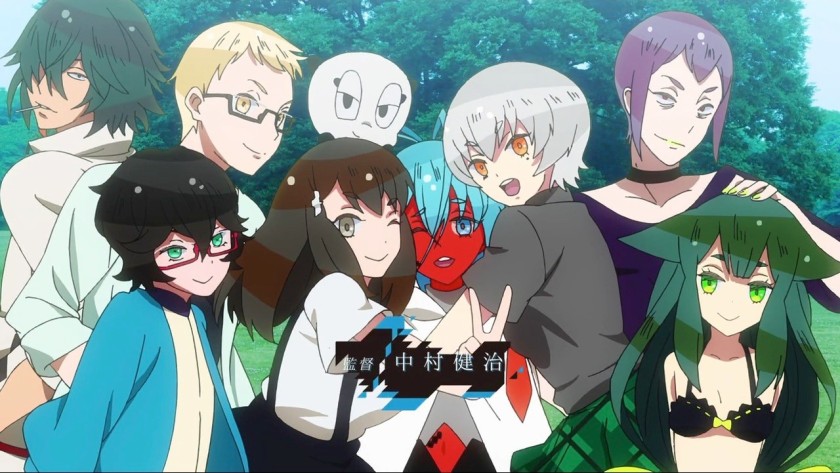 Here we are with the still experimental stages of talking about what I watch every week. In writing this, I kind of noticed that I might be watching too many anime at a time. I’m kind of glad that I am a slow watcher. It means I can enjoy more content at a time which is how my mind works.

This was the funniest episode of this show for me in a while. The random civilians that made it into Suburu’s cockpit caught me off guard in the best way possible. I also love the problems Isuzu and his small crew had when destroying the mechs. A bomb detonator that didn’t come with batteries and the fact the back of the boom was double sided tape had me chuckling louder then I should have been.

Speaking of best episodes, this one wasn’t a slouch either. For one thing, we have a voice battle between a person with a magical voice and a talking guitar vs a dragon whose breath is their voice. All this just to get an antidote for our poisoned protagonist. Then we have our who villains just loving how evil they could be by soaking in as ham and evil as they could. I love this show so much.

In this episode, the escape king didn’t live up to his name because he failed from escaping from the Japanese 7th army multiple times despite how many times his group tried to help him. Sugimoto has eyes on murdering the escape king alive after finally realizing how many times he’s been double crossed. Also, the supposed “villains” introduced another crazy character who is the weapon smith who yells all the time over enthusiastically. I also love the how the former twin continually gets part of him cut off and replaced by more militaristic elements. Another show that I just love the insanity from.

Run with the Wind Episode 5

Well, more characters are getting into Haiji’s plan of running in the big race. Everyone seems to be finding their own reasons for running and/or the resistance to running every day is slowly going away. If I can find a problem with this show, it’s how many characters there are. The character interactions are well directed, but they are given only a short amount of time to develop their drama. Still another solid episode though.

I’m beginning to think that the writer because this series didn’t have enough content to fill up an entire series, so here we are with another filler episode. Besides the questionable visuals of Derrida and the gang getting chased in Graham by various types of robots, we get down time to why our bounty hunter brought his little daughter Mayuka on this journey. We get to see more of this bounty hunter’s backstory in which he was a cop that lost his wife which is ok I guess. We still don’t get a complete answer from the guy, but that’s ok. Not everything in life gets an answer as easily as a math problem. Still, can we have to find Mage now because there are only three episodes left.

Well, that was a hard episode to watch. It was nice seeing the young kid Masaru come to his own, escape his evil uncle, and even hire some goons, but it was difficult from a lot of other levels. He was able to buy off the gang of puppeteers that was trying to kill him, but he still had a hard time saving Shirogane and Narumi from all the incidents they were involved in. That being said, the last episode where Narumi saved Masaru from the fire by and the building falling but only seeing his left arm at the end instead of his body was horrifying. What a cliff hanger.

Is it possible to have something called a “normal JoJo” episode, because this seemed like something that could be called that. After our main protagonist Giovani killed the boss of the gang he just joined, he created a power vaccum. Bucciarti is the one who knows where the money he introduces Giovani to the rest of his quirky gang, takes them on a yacht ride, and tells them he knows where the boss’s gold is. After that, it comes a stand battle in the middle of the ocean. You know, just JoJo’s stuff

Bloom into You Episode 5

Man, this is such a slow romance build up and that’s ok. Yuu is still in denial that she like her Nanami Sensei, though she is finding Nanami’s presence comforting. So anyway, the too study a lot in this episode and the last time they studied, they went to Yuu’s house where Nanami learns more about Yuu. I can’t wait until they actually become a couple, but I think all this build up will make it worth it.

This is Gridman’s swimsuit episode which they try to make it more interesting by having it focus on rafting. You all know what the swimsuit episode thing means; we get a bunch of shots for our girls Rikka and Akane in fanservicey shots. I guess this makes sense, because Rikka and Akane are the ones that any sort of definable personality to them, though Yuu is getting closer to establishing one. I am also glad that Gridman uses the location to great effect because A giant monster created from the mountain everyone was on emerged and it was awesome. I also like that they took the old computer to the train station for Gridman to launch, some we have some old tech vs new tech concepts brought up in gag form, which is fun. More people are waking up to these kaiju attacks, which is good.

That was Double Decker’s most dramatic episodes that we’ve had so far. It was centered on Doug’s backstory and his taking revenge for losing one of his partners when he first started out as a police officer. There are twists in this episode as a usual Double Decker episode does, but they are more played into dramatic effect then comedic effect which works well with the tone of this episode. I just wish that Doug wouldn’t keep to himself as often, but that is his character. So over all, another good episode.

With these two episodes, the final battle against the aliens possessing the social media platform Galax is defeated. While the Gatchaman tried their hardest to keep the bad ghost like crowds from taking over the government, Rui let everyone else have this ability. In the end, it was the civilians of the Gatchaman Crowds world that saved everyone. Also, the alien is now locked away in Hajime’s boobs now which is a fun concept I think. She doesn’t seem bothered by it.

Well dang, that’s a way to start a sequel. An alien lands on Earth seeking peace on Earth and we get a new Gatchaman. A female by the name of Tsubasa who wants to create fireworks is our new point of view character for this show. After that, we got a lot of open conflict with hijacked crowds attack society with some the morals of granting human kind this power being put into question. Insights is honestly more interesting to me then the first season of Gatchaman Crowds was for me.

This Lab 5 arc is horrifying. For one thing…WHY IS SHOU TUCKER STILL AROUND. KILL HIM. KILL HIM NOW. On the other side, Scar and the Homunculi got more involved in this arc then Brotherhood and that’s a good thing and a bad thing. I like how the Homunculi are different and provided an interesting human layer compared to the Brotherhood, but I don’t like that the Homunculi basically told Ed what their plot was because where do you go from there? One major rule of storytelling is NOT GIVING AWAY YOUR MYSTERY PLOT HALF WAY THROUGH THE SHOW. Maybe there is something else going on, but it might feel weaker after such a big reveal like this. Oh, Winry is back and Al ran away after thinking he’s not real, but that was resolved and the brothers are back then better than ever.

I am loving this well produced children’s cartoon more and more as time goes on. In these episodes, Yuu and Giant Gorg finally meet up with Doris, Skipper, and Tom with some other island additions into the group. Also, Yuu has discovered that Gorg has some ancient mysteries attached to him like older levels of technology. Anyway, they are all making their journey to the newer austral island where nobody knows what is going on with GAIL on their trail. Classic cartoon adventure stuff that I love.

Well, here we are with two episodes of backstory for our group members. Both episodes certain around either the motorcycle gang backstory for our bad ass female Houqet or we are given the backstory of Jim’s soldier life when he is only trying to return a book. The town’s reception of our group in either episode is what makes each episode different. I wouldn’t mind if the show continued in this direction for a while.

This week, we get closer to the mystery of who Chirico actually is by slowly leaking in that mystery in a more dramatic way. He does get chased around by the society through Quintain’s desert, but in was in those circumstances where we learn what the Quintain’s hidden and/or forbidden technology does or how powerful it is. One of those abilities is transporting people long distance with a 2001: A Space Odyssey portal effects. With that being said, I like how this arc is more subdued and focused on Chirico himself I say while the Balarant and Gilgamesh Forces are headed toward Quint to screw everything up.

Hey, this wasn’t that hard of a post to write. I guess slowly building this post over the week isn’t that bad of an idea, so I will keep going with this as long as I can.