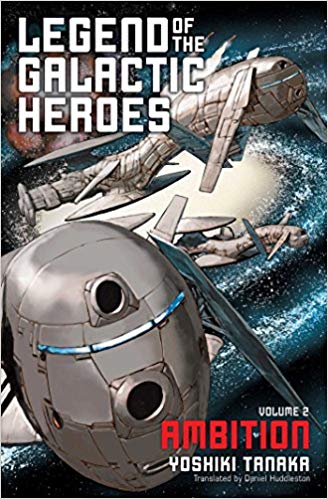 Read my Volume 1 Review Here. The following is and isn’t going to be a review.

I know this seems off the wall compared to everything else that I have posted this week, but I think Legend of the Galactic Heroes connect to a lot of what is going on with our societies right now. Especially for those of us who are living in the United States and/or a country leaning to the right politically. (Yes, I am at least a left-wing leaning person, but I am not sure what I am defined as either.) Even if Legend of the Galactic Heroes was written during the era of the cold war, which is incredibly obvious considering that it’s about two sides of a war starring at each other angrily over a well-defined space border, a lot of the politics and talk from that era still apply to now. It becomes immediately clear in something like this second volume.

To talk about the plot of this second volume of Legend of the Galactic Heroes, it’s about civil wars. I don’t mean conflict and battles between the Free Planets Alliance and the Empire only; I mean each of those space countries are in states of political unrest. For the Free Planets Alliance, the costs of the battles from the first volume were too high and the FPA went into a session of political unrest. The Empire was facing something different in some ways, because the emperor died without any heirs at a proper age to carry on the empire’s reign. There is more going on then that because the aristocracy immediately went up in arms and formed their own faction while also holding back a lot of resources from the public. It was up to Yang Wenli to cut down the rebellion in the Free Planets Alliance and Reinhard to take down the rebellion from the nobles. Yang just returned everything back to normal for the Free Planets Alliance with some fixes and Reinhard just took control of the empire. Yup, he accomplished half of his goal in the second volume. It’s a crazy, deep, and philosophical volume to continue the world building of this universe and it does all of that incredibly well.

(If you don’t want to be spoiled and/or interested in watching this show or anime series at all, I wouldn’t go past this part. This is your warning.)

If this specific volume of Legend of the Galactic Heroes had a message or a warning, it’s keeping an eye on the military industrial complex. I’m not saying that the series or other volumes don’t carry that weight with them, but it’s very much a focus for this volume. The Free Planets Alliance was originally created as a democracy to counter the ideologies of the dictatorship they just left after being oppressed for generations. That’s a very nice sentiment and situation, right? You ever wonder what happens when a nation like that is in a war situation for hundreds of years? The Free Planets Alliance is the over exaggerated example (I hope) of the corrupt politicians that want nothing but war taking up most of the country’s infrastructure. The first volume explained how the average age of workers in different industrial fields outside of the military was 45. That sounds pretty good right? Except it isn’t when your work force is literally made from the elderly and those who are too young to work. That’s right, the FPA is current built on a terrible infrastructure. Since the huge military campaign failed, an uprising was the result. Not the result the uprising that you would expect though.

There are multiple uprisings in this volume, but the one that is worthy of note but the one that takes over the volume is from the Military itself. The public have quite a few demonstrations against the government in protest, but a branch of the military with ships and armed men makes a much bigger presence in the long run. They call themselves “The National Salvation Military Council” in the anime or something else longer and much more stupid in the book. I know this is a book thing, but I don’t feel like using that name here. Their mission? To take out the corruption in the government and and get the alliance back into fighting against the Empire. The best thing that could have happened was these two uprisings joining together and putting the government down. Yeah, that’s yet another problem, the military take over and the public didn’t align with each other at all. Their was an incident where the military uprising massacred a bunch of civilian protesters which inevitably caused the military to lose all respect and support for the public. While the National Salvation Military Council had good intentions, everything they were fighting for was completely lost. The rebellion in the rebellion was officially doomed.

In the end, Yang just brought down the military rebellion. I think the fact that one of his best friends killed the during the massacre pushed him to crushing the rebellion as fast as he could. What was the result? Well, the scum government leader that Yang hated was still in the power in the end. Yang could have solved all his personal problems and just taken over the government itself in a dictatorship role, but that isn’t a responsibility that he wanted in the end. Yang is a lazy individual who already has a work in the first place who also believes in democracy with all his heart. Yang fighting against his own way of living as well as leading large amounts of people to their deaths. Kind of a no-win scenario for him, don’t you think? Yang’s hesitance and lack of commitment come back to bite him. Democracy would have lost either way.

As I’ve written above, the uprisings or combat of Reinhard and his military against the nobles versus their forces in Reinhard’s favor as you would expect. There were some more edges to this though. The Empire wasn’t in good economic standing either, so Reinhard’s plan of taking money from the nobles that withheld money from the public was his plan for restoring the empire. Some members of the royal family where killed at the end, but only those who could directly oppose him. As you would expect, Reinhard wins and takes command of the empire for himself. Yang and Reinhard are such different people and their motivations are very different. That doesn’t mean that some complex issues didn’t arise in the Reinhard’s fight on the empire’s side, because those did happen. I am glad that it’s not just a straight on usurper taking the throne story things.

There was a major incident where the nobles were pushed into a corner and caused an escalation that destroyed an entire planet’s population. Knowing about this beforehand, Reinhard could have stopped this incident or lowered the damage and amount of people that died from it. In the end, he chose not to get involved which resulted in many people dying and also the pubic opinion of the nobles falling through the roof. As you would expect, Reinhard was emotionally distressed from it. The emotional distress resulted in a conflict with his best friend/shadow who is pure of heart, which inevitably lead to Reinhard losing his best friend and self-destructing emotionally for a while. When he came back to being himself, he had a greedy edge to him that wasn’t there before. I do love Reinhard’s line that is along the lines of “If you want to challenge me, feel free to do so” because that means he accepts anyone that shows more military skill then him if that person exists. It adds such interesting layers and vulnerabilities to his character.

If Legend of the Galactic Heroes has a major failing, it’s the fact that there is no audience surrogate for what is going on the Universe it created on the ground level. Every single person is a high-level military officer or a high-level political official. Everything that happens to normal people is just quickly commented on because there is only some weight to them. This works in the novel form, because this a lot of things happen in a two hundred and fifty or so page book so that works with the pace of the story itself. Why is this important? Because we are talking about political reforms that affect people and how they live. The empire becoming more normal people focused instead of aristocracy focused is a big deal for those people, but there are only some sentences and assorted people we don’t know commenting on what happens and its significance. Same thing for the rebellion in the Free Planets Alliance, because the massacre is only a couple pages long. The impact isn’t truly there. Good character drama on an upper level doesn’t help with the lower level.

With that in mind, the politics involved in this volume of Legend of the Galactic Heroes is something we all should keep in mind. Why? While everything is exaggerated on some level, but they are warning signs of what might be to come for any country. The corruption that happened from the Free Planets Alliance is what is pushing it toward no longer being a democracy or becoming a democracy in name only. Also, some scum bag politicians in that government of the Free Planets Alliance have a lot of versatility to them. All these people who talk even care about the public good or the lives of their military men for their own goals are the worst scum on the planet. What I am saying is that they are impossible to get rid of and can scum up everything about the government was about. These are similar issues to what the United States is facing right now with how people are trying to figure what our certain segments of the constitution means and how it applies to what is going on the United States today. Are we corrupting what is going on, are certain segments of the constitution being pushed in directions they shouldn’t, and so on. The Free Planets Alliance and how it’s written in Legend of the Galactic Heroes is something that should be analyzed by politicians. Especially with what is going on with the third volume right now, but more on that in Volume 3’s own dedicated post.