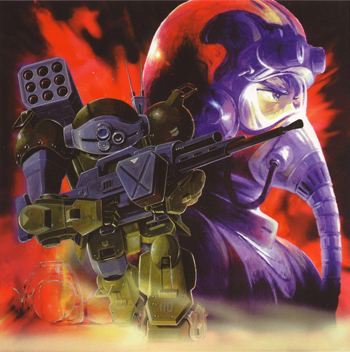 To ruin the illusion of me writing about all these mech shows that are getting a review this month, I finished watching Armored Trooper Votoms in the middle of November last year. I think you can now see how far in advanced I’ve been thinking and planning for Mecha March. Armored Trooper Votoms is a show that was released at the pace of three episodes a week for an extended amount of time by HIDIVE. So basically, I watched this show similarly to how I watch seasonal anime. Considering that Armored Trooper Votoms is 52 episodes, that’s what it felt like for a while. If you followed my twitter feed from August onward, you might know that I feel in love with it half way through it’s second arc. Armored Trooper Votoms just had this special feeling to it that drew me further and further into it the more I watched it. This wasn’t the first I tried watching Votoms, because I tried it a few years ago and stopped for some reason so something might of put me off. I don’t remember why, but I am glad I gave it a second chance. As old as it was on a visual level, the story telling in this series more then made up for everything.

Armored Trooper Votoms takes place after a one hundred year between the space forces/countries known as Gilgamish and Balarant. Chirico Cuvie, our main protagonist, had the dishonor of being a new transfer to a ship that was about to go on a secret mission to attack an allied base. The mission goal was never explained to Chirico, because he was an outsider. During the assault, he unknowingly came across the mission goal when he opened a mysterious box. It had a special woman sleeping inside with whom he immediately fell in love with. Little did he know until later that this woman was designed to be a perfect soldier and also reciprocated Chirico’s feelings because she woke up when the box opened. After the operation was over, Chirico escaped this ship, was captured by the Gilgamesh forces because the captain thought he knew something, and then Chirico escaped that ship too to only end up in a city on a planet in the middle of nowhere. The war was over, but it was never truly over for a life long soldier like Chirico. And so begins Armored Trooper’s epic adventure.

This anime’s story is constructed out of four arcs with their own specific and unique settings. First there is Uoodo, a city ruled by a militaristic police force that is very dystopic in nature. This is the arc where Chirico meets his series long friends by the name of Gotho (the older weapons trader), Vanilla (the former helicopter pilot that is also a weapons trader), and Cocona (the stray cat) who stay with him and help him develop. These three members are also Chirico’s morality pets where you can see how human Chirico is as time goes on. He also meets Fyana, the perfect soldier he fell in love with, in action on the opposite side in this arc and also finding out that they do have some feelings towards each other. The second arc is the Kummen arc which is like an adhoc Vietnam situation with mechs fighting the jungles a civil war a civil war with the secret society fighting against Chirico’s side that Fyana and another Perfect Soldier by the name of Ypsilon are a part of. These two arcs are like the place settings for the final two because now that all the characters are in place, the show feels like it wants to do something with them.

Ok, the next arcs aren’t as varied per se, because they are centered around desert planets. Still, they each hold some of the personal mysteries of our main protagonist Chirico in them. Chirico is a very quiet protagonist that tries to keep himself distanced from other people because he doesn’t feel like he’s a normal individual. I mean, he only knows how to fight and loves being in situations where can fight to his heart’s content. The guy isn’t much of a talker, but you can get all of that through how he carries himself and his body language.

The third arc when Chirico and Fynana are alone on a space ship heading to who knows where and he and Fyana can fight the threats that oppose them is where he starts to break down. Given what his previous service was like and how addicted he was to combat, this seemed like the most realistic sense of PTSD that I’ve ever seen in anime. It helps that he was not right of mind because he had a fever that he couldn’t control and its truly stuff that I was enamored with. The third arc is my favorite arc in this anime. While every other arc in Armored Trooper Votoms are very antiwar, this is where that aspect of the show started to appear in full steam. I won’t tell you anything about the forth arc, because that’s digging too deeply into spoilers.

Since Fyana is this show’s love interest, I feel like I should talk a lot about her. I already mentioned that she was designed to be a Perfect Soldier, so there is that. There are some early 80’s character and she is one of two female permanent female characters in the show so the traits of “woman” and “emotional” is given to her. She even mentions she learned how to cook when her and Chirico are in the middle of a jungle trying not to be found or shot. With all that in mind that, she’s still a complete bad ass when piloting a mech. Nobody besides the other perfect soldier by the name of Ypsilon and Chirico are on her level. When Chirico is sick on the ship leading to who knows where, she takes up arms and defeats every single mech that opposes them. Not to mention she defeated Chirico in the first arc and so many other instances that she was involved in. Fyana is amazing, so go her! She is weighed down by 1980’s tropes, but she succeeds anyway.

This is a mech series, let’s talk about them. I love how the Armored Troopers as used in this show and their designs. They are so cool. The first thing that caught me off guard is how disposable all the mechs are. Yes, all of them. While there are experimental mechs used to emphasize a perfect soldier’s capabilities, they can be destroyed just as easily as a standard mech. And then there is the fact that Chirico goes through so many mechs in this show. While most of his mechs are scope dogs and other variants, the rigidity and disposability of each Armored Trooper unit on the field of battle is incredibly consistent throughout the show. Then there is the subtle symbolism of the mechs by their color and design. For starters, each arc has their own special mech with a distinct design and color to give them their own identity. At the same time, Chirico almost always pilots a green scope dog so he is easily distinctive from the rest of the show’s characters. That is unless he steals some an enemy or his personality completely changes, and he pilots another colored mech because he wants to. Maybe that could be a coincidence, but I don’t think so. There is a lot of thought being put into Armored Trooper.

For a show from the early 80’s, Armored Trooper Votoms is amazing compared to a lot of its peers during that time. Especially considering that it 52 episodes. Since the show is cut into four arcs, that means the amount of filler is greatly reduced and most of the show is all business. There are recap episodes, but they are well placed in necessary points so you don’t forget what happened after the arc you just watched so you can go into new ones remembering everything going on. Also, like with other 80’s anime, there are some reused scenes during battles. The crazy thing is the amount of stock footage is very low. While you can easily remember some explosions, a lot of battle scenes are completely original footage and it’s so good. I love it when battle scenes are so original like this because everything feels so new and fresh. And yeah, insert usual speel about how the character designs are unique and how each character has their own distinct colors to them as well. I just love all of this. Everything is so spot on.

At this moment, I can’t help but recommend Armored Trooper Votoms to everyone. Especially since it’s become one of my favorite mech shows that I’ve ever watched. Ryosuke Takahashi is a name that deserves to be amongst the bigger mecha creator names of Yoshiyuki Tomino of Universal Century Gundam and Shoji Kawamori of Macross and Escaflowne fame. Ryosuke’s approach to mecha shows is incredibly unique. Especially with Votoms where the cast is incredibly small compared to what you would expect from a mech show. That means relating and getting to know this cast is incredibly easy. Then there is the strong anti-war message, the completely destructible mechs, space combat, and so many other cool and interesting things. If a 52-episode mech series like Armored Trooper Votoms doesn’t scare you, then please give it a watch. I am more than sure that it won’t disappoint you at all. If it does, that’s ok. Different of opinion is alright. I can never be upset at people who try something out.

If you feel like supporting me, please donate to my Kofi. Don’t feel like you have to!

Also, if you are interested in watching Votoms, you can watch it on HIDIVE or even order it on RightStuf right here.