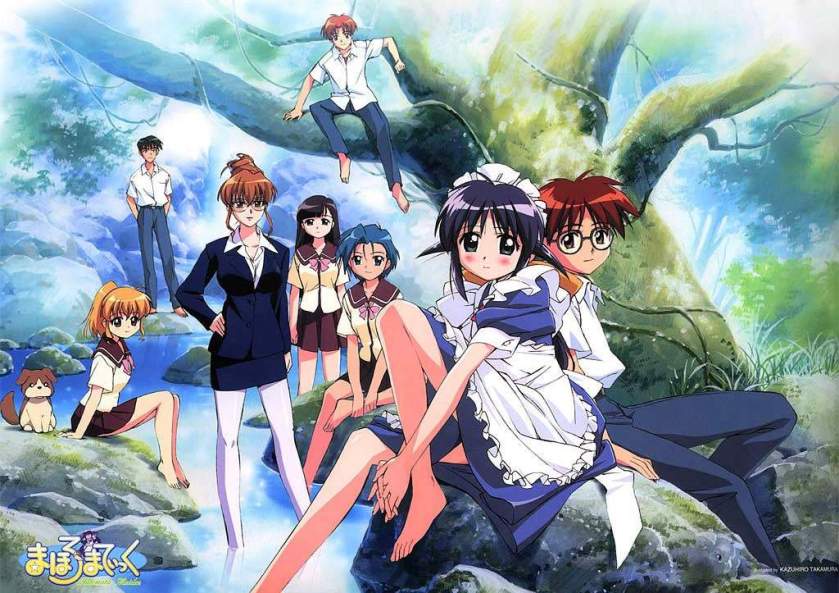 Last week’s post was dedicated to Kaiba and more exploration of Masaki Yuasa’s works. This post is dedicated in a similar manner, but to explore more of studio Gainax’s works. The strange thing is from everything that I’ve seen, Gainax has a lot of discography talked about for one reason or another. They used to be a studio that had a high level of creativity behind everything they worked on. Even if Gainax is a low budget studio (yes they are, don’t lie to yourself) they’ve created too many ground breaking works to named. From Gunbuster to Nadia to Eva to Kare Kano to FLCL to Diebuster to Gurren Lagan and finally to Panty and Stocking, they had a lot of things going on. No matter what you think about them, you can’t deny how influential they’ve been, though not every single work they’ve done has been a topical of conversation. Mahoromatic is one of them and I believe this show still has so many unique traits about it that needs to be talked about too, even if I thought this show wasn’t meant for me.

Mahoromatic is such a strange beast to talk about because even its background is something out there. The show itself takes place during a secret space war that most of humanity doesn’t know about. It all started with the alien race called the Saint searching for another race to communicate with and ending up finding Earth only to be attacked by a group called Vesper. Since the Saint thought that humans only communicated through war, they decided to continue this continue fighting for one reason or another. This led to the creation of Mahoro from Vesper copied from Saint technology. She is the ultimate combat android, but only has a limited span of time to live. Following a combat mission, she had to kill one of Vesper’s Leaders and only has a limited amount of time to live so she retires from the combat field and becomes the maid of the dead Vesper leader’s son, Suguru Misato who is a normal, messy high school student. The second season is basically the same but adds a government group called management to the mix to keep an eye on the war and another younger maid girl named Miwa who is explained as Mahoro’s “younger sister” and is a delicate character that has a larger heart then she realizes.

So, the plot of Mahoromatic is similar to a lot of magical girlfriend shows except she is a pure hearted combat android that can do everything, has a dark background story revolving around her wartime P.T.S.D., and is working as Suguru’s maid because she feels guilty about her hand in Suguru’s parent’s deaths. So immediately, everything this anime’s story has so much emotional weight that drives it forward and makes the current situation make sense. These aren’t spoilers by the way, this is information you get pretty early in the show’s run. Even if the show spent a lot of time goofing around with Suguru, Mahoro, Miwa in the second season, and underdeveloped characters in high school shenanigans and a love story between Suguru and Mahoro, each of those goofing off moments strangely has a reason for it happening. The last few episodes of each season are huge, meaningful, and emotional for Mahoro and Suguru in one way or another. Just for me though, this kind of 75% humor and fanservice with another 25% action. The problem is that Mahoromatic is a clunky and somewhat hollow show that doesn’t care about the side characters in the 75% portion.

I’m going to preface this by first saying that Suguru and Mahoro are both great characters. Mahoromatic is vaguely harem like with it’s set up and how it handles fanservice, but Suguru is not just a harem main character without any personality to him. He’s very normally intelligent and emotionally intelligent. He can tell when Mahoro or anyone else is sad and can find ways to figure out why she is sad with his own investigating. He is also very strong willed and knows when to step in when he must for the better of above. I’ve already talked about Mahoro before, so the two do end up as a couple or at least confessing to each other in the end. I can at least say that the lack of the development of the other side characters is worth that? Not really, I wish I knew them more. The three girls together are that losing childhood friend with one of them being a foodie, one of them being a shrine maiden, and the other working at their family’s bath house. If they could have been fused together, that would have been great. Just hanging out with them isn’t enough. Notice how I haven’t talked about Suguru’s male friends at all? It’s because they have less personality then even the female side characters.

I do need to comment about a certain Ms. Shikijo though. She shares a character design with a lot of Gainax fanservice women in the 2000’s. In this show though, she’s the sex obsessed 25-year-old hanging out with middle school kids and when she gets turned on, which is all the time, she acts like some one who is inhuman and self obsessed in her own actions or something. It’s hard to explain because it’s beyond human understanding. Ms. Shikijo, like everyone else, is after Suguru as well and thinks she can get him before he is ready, which is really gross. Her advances are horrifying and I don’t think she should exist in this series. That being said, her existence is pretty sad. The fact that Shikijo still hangs out with teenagers instead of adults shows that she is stuck in the past and will never grow up even if she is a teacher that makes her own wages. I guess even the worst characters can have some depth to them, huh?

And digging more into this show, I feel like I do have to talk about the fanservice because it’s there and it’s not hiding. For the most part, Mahoromatic has been pretty light with it with some particular episodes that are not. Yes, even with Shikijo’s existence. I mean, there are bath scenes centered on the girls and them talking about breast sizes, because those are anime things that are going to be there. Still, it’s pretty light over all. No accidental slips and characters landing on other characters body parts happen, and I think each girl gets on panty shot a season, which feels like they were chosen to happen by executive committee. Something that I think about in my head and can’t help laughing at for one reason or another. I’m not a huge fan of fanservice myself, but it didn’t get in the way of the emotional experience of watching this anime and that’s something that I happy about. I won’t judge an anime for having fanservice, because that would be completely ridiculous, but I can judge it for getting in the way of the story it wanted to tell. That didn’t happen here.

I do have to mention how horrible the visuals are over all. There are some short, amazing cuts of action sequences only to revert to still shots and cheap tricks to tell you that characters have moved from one location to another. Also, a lot of shots of characters just standing in place and talking, so typical gainax fare. If you want to know how bad it is, after an action packed first few minutes, the next part of the first episode is bus hostage case where bus is just a white plane with some bus seats and there is no since of urgent movements at all. The rest of the show is like that. You can tell where Gainax and Shaft spent their resources and they are generally well spent. I guess visual flair wasn’t always what this show needed in the first place because it’s more focused on the ok comedy. I guess I should at least mention how some of the backgrounds have some white out edges to make the show feel like a dream sequence, which works in context to Mahoro’s story. Also, the character designs are very distinct which is what you need in a show like this.

In the end, this show was generally alright. Not my cup of tea because not everything Mahoromatic presented to me hit for me as well as they could have. Still, when the emotional beats hit, they surely hit. Mahoromatic isn’t ground breaking in anyway, but there are enough powerful moments and action scenes that make the series more then the sum of its parts as times. I just wish it had more then the necessary character depth to go along with everything else to make the experience feel complete and impactful. Definitely not the ground-breaking kind of show that you would expect from Gainax in anyway, but I think that everything that was made around the same time as this show just over powered. I guess there is a reason for that.

Oh, should I say something about the Gainax Ending? Nah. I’m not sure that’s important at all…