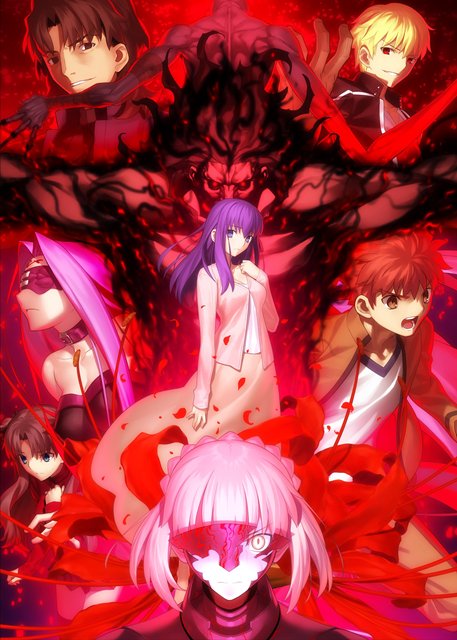 I’ve been wondering to myself how I was going to approach the Heaven’s Feel: Lost Butterfly for a week or two now and there is a major reason of that. It’s the middle chapter of a movie trilogy. It has no beginning and no definitive ending either. Just a cliff hanger. With that in mind, you could say that it’s the Empire Strikes Back of the Heaven’s Feel Trilogy. Everything in this film escalates as much as an anime series can, which is a lot, and there are spoilers that I don’t want to talk about. What I can tell you is that I was completely swept off my feet by this film and I absolutely loved it. Even if everything that happened in it was completely bonkers. What I am saying is that I am dating this film now, which is very fate appropriate. With all the amazing visuals, it’s everything you would expect from the fate series and more. And just like everything else, you must watch a lot of fate series to get what is going on. That is the approach that I decided with this post. Talking about Fate and my attachment to larger anime franchises in general.

Can you believe there was a time when all anime fans new about the fate franchise was the Studio Deen adaptation of Fate/Stay Night? I was one of those fans. While I can’t say that I’ve been paying attention to the fate franchise as long as the Gundam franchise, I was there since it first appeared in anime form. Back then, it was one of the most unique anime series that I’ve ever seen in some ways. A death battle series? Those weren’t popular in those days and I never thought I would see anything from this series ever again. Years later, I walked into this thing called Fate/Zero where I watched the whole thing in two days. I was completely enamored by it and that was the real link in the chain that stuck me to yet another franchise. Stick Fate onto that pile of strange anime franchises that I like next to Gundam and Ghost in the Shell. I’ve watched everything fate related since Zero came out and now I am stuck playing Fate/Grand Order. What a crazy life this has been.

A lot like Gundam Narrative, liking Heaven’s Feel is a result of watching at least one fate adaptation to know what is going on. At the same time, the more Fate that you’ve watched the more you will get out of these Heaven’s Feel films. Not only is Heaven’s Feel the true successor to Fate/Zero, Heaven’s Feel requires knowledge of two different anime series in order to fully get everything that is going on. I’ve never played the visual novel, but apparently the Heaven’s Feel movie and other series at least did a good job to replicate that kind of insanity. The first movie even had the scene where Saber was summoned and her fight with Lancer as a quick credit’s scene at the beginning of the film. No expenses or screen time was spared in this movie to tell you that story and everything felt rewarding because of that. That’s the fun part of watching things that are apart of a franchise.

Sequels and other attachments to a franchise of films and/or tv shows are insanely tedious to watch and take up a lot of time, but there are some rewards that come with it. For example, if you have watched only Gundam 0079, Zeta Gundam, Char’s Counter Attack of the Universal Century and so on, then you fully understand the Universal Century. Still, you haven’t watched all the somewhat tedious but generally good ovas in the Universal Century that color everything that goes on to make it feel more complete. Not required viewing mind you, but going “oh, I remember that thing from this other thing” gives you a larger feeling of familiarity to universe itself. It can possibly make you feel smarter too (if you are insane like me). Especially when there is actual continuity between one part or another for some sort of series.

As tedious as it is to watch all these things that are connected to each other in one way or another, I like it. Watching larger franchises are just a lot of fun for me. As much as I complain about it sometimes, the Marvel Cinematic Universe is interesting because of how each completely different film (sometimes) with a different genre somehow, that connect in the end. Like an actual comic book thing in a way. Even if the movies are some of the least unique things in the universe, super heroes are apart of my culture and I can’t help but be addicted to watching them in some form and seeing what happens in the next film. Basically, what I am saying is that I can be a sheep sometimes that knows what they are following. Now you know that I am follower, not a leader. And the sad thing is that only having a title of a series with it is enough to get me to watch something. If the title of the anime says Ghost in the Shell somewhere, I know that I am going to watch it because most things with that title haven’t disappointed me too much yet (besides the live action film).

From Fate to Gundam to Dragon Ball to Ghost in the Shell or even western movie and tv franchises like Star Wars, Star Trek, and the Marvel Cinematic Universe, I just like watching things attached to franchises. Especially since I feel like I have a personal and nostalgic connection to them like each of ones I named in some way and I still watch or try out their latest attachments now in some way. I guess I can’t get away from them. Oh well, so be it then. At least I’m enjoying my insanity.