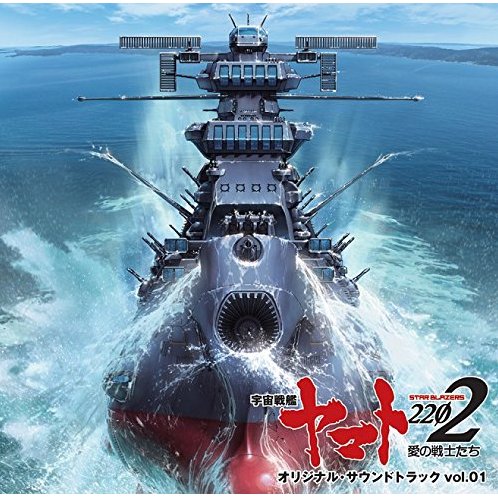 I feel like there is nothing harder to make then a sequel to a series that is nearly perfect in all regards. Think in the mind of a movie director or writer who suddenly has the task of making something that at least surpasses what you just made and became popular. What direction do you take? What different things can you get out of your already established characters? Think of the Dark Knight Rises, The Return of the Jedi, and dare I say….Endgame. All good movies by themselves but very lacking compared to the ground breaking sort of movies that happened before them that also have a lot looser stories to them. That’s what Yamato 2202 is like compared to Yamato 2199. Wild and messy, but wonderful in it’s own way.

To talk about this show’s story, understanding what happened in Yamato 2199 is very important. If you ever wondered what Yamato 2199 is about, DerekL and I did an episode by episode collab on it a while back that you should check out. I guess if you are too lazy to do that, the story revolves around a lone crew riding on that is a space version of the Battleship Yamato from World War 2 into space to save the human race. The Earth was infected by a space virus that is slowly destroying the surface of the Earth and it’s inhabitants, so the human race only has one year to survive. That is unless the Yamato is successful on it’s mission to get the mystical device called the Cosmo Reserver from a planet called Iscander and bring it home in time. It’s a dangerous journey that involves fighting against the dangers of space and the Gamilian attackers all the way to Iscander and back. I’m guessing you think the mission was successful, right? Nope, they all died and the sequel is following the winning empire, The Gamilians. Yeah, nobody would fall for that. Yes, the crew survived their trip in a timely manner and the Earth was brought to normal. Or so we think.

Yamato 2202’s opening episodes are picture perfect representations for how Happy Endings aren’t realistic. The Earth was saved, yes. That fact is truth. What the military is doing with this saved world is something else entirely. Using the Cosmo Reserver to save the Earth and it’s people, yes. It also created a pocket dimension called the time fault where time flows slower then the rest of the planet. Do you know what the military is doing with that time fault? Building a gigantic fleet of space ships. It’s the crew of the Yamato’s worse nightmare seeing what they fought against in the first series suddenly becoming the Earth’s reality. Then again, it was the Yamato’s deal with the Iscanderians to not mobilize an entire space military and fire space canons everywhere, not the Earth’s right? So here is theme number one of this story. This one plot element sits there to provide a horrifying atmosphere to the show. That means there is more tragedy to come.

The second theme is love which comes with the invading alien race called the Galantians. A race of green humanoids lead by Zworder. The Gatlanteans are not humanoids that care about emotions or relationships with each other at all. In fact, they reproduce by cloning themselves. There are plenty of moments when Zworder has to kill off some of his own fleets because sometimes they are rabid and uncontrollable. Gatlanteans don’t understand emotions or how to handle them, so they just go completely berserk. The coolest part of this race is that they take their home planet with them when they invade. It’s protected in a way that makes it look like a comet. It’s so cool and I love their theme song with the organ. So good. Human kind has met it’s match and up to the Yamato going to the heart of this planet in order to find a way to survive. Can Kodai and his crew do it? Tune into this show and see what happens. No seriously, the answer is complicated.

The characters in Yamato 2202 are very half and half for me. I like what the show does with Kodai, Zworder, the other characters the show focuses on, and the new characters that are introduced in this show, but a lot of characters that didn’t get that much focus in Yamato 2199 got less focus here. They are just background characters that only get some moments when the camera focuses on them. It doesn’t help that one forth of this season felt like another show because it introduced a new cast and a new ship. I also feel very conflicted on how 2202 treats Yuki Mori. She isn’t ruined at all because her character is still her self determined self while kicking ass and taking names, but she feels more like a plot device at the end of the series then I liked. With that said, let’s focus on some character arcs, shall we?

Kodai’s journey in Yamato 2202 is utterly phenomenal because his story is Yamato 2202’s story. At the beginning of Yamato 2202, he was forced into the position of Captain of the Yamato because there was no one else since Okita died and it felt like the crew’s natural course of action. Of course, he wasn’t ready for it. When he had to fire the ship’s Wave Motion Canon, he personally took the blame for breaking his deal against Iscander. That was until the crew decided to talk him out of it and took they all took the blame for it by himself. Also, the show placed a new Captain at the helm who was Okita’s best friend, Captain Hijikata. This didn’t impact the Kodai’s too much because he still had places to grow. He wanted to go for the peaceful solution to end the war against Gatlantist and also grew into the role of being captain. No matter what hits he took, he was more then willing to keep going. I want to be Kodai when I grow up.

The new character that interested me the most of a certain Captain Keyman. His sense of mystery and importance made him so compelling to me. He is the attaché from the Gamilian people to the humans on the Yamato, so there is already that interesting edge to him and the Yamato that made him interesting. The Gamilians and the Earth are at peace with each other now, but the Gamilians still attacked Earth in order to kill humanity after all. Keyman being there was a huge reminder of that fear that still hit Earth. That’s only where Keyman’s character begins. I’m not going to spoil it, but the reason why he is on the Yamato and who he actually is are incredibly interesting and meant a lot to the story as a whole. Anything else that I am going to say would be a spoiler, but he needed to be highlighted.

Lastly, Zworder was an incredibly interesting villain for someone that was just a clone. He is the leader of the Gatlantean people that seeks to destroy all of the people on the Earth, all of Earth’s allies, and all that is left in human kind in the universe probably. Zworder is a guy that says he hates and rejects emotions, yet he’s still suffering from a heart break that he suffered many years ago. So what do you do when that happens to you? I don’t know what the answer is, but Zworder’s answer is lashing out at everyone. When Zworder sees Kodai in a similar position during the show, Zworder knows where to hit Kodai emotionally to make him stop. It also connects the two together very well to each other and just adds even more to the emotional experience that is Yamato 2202.

This is the part where I start comparing 2199 and 2202. So I have been saying mostly good things about Yamato 2202, right? And it is very good for the most part from an emotional and character perspective, but not from a structural perspective. Yamato 2199 took the genius approach of taking the formula of the original series and playing around with it to improve the show’s story and characters. It also changes the way everything turns out. With those changes means that the next story, Yamato 2202 needs to take up those changes while carrying the plot line of Yamato 2 somewhat. The end result is the story is somewhat convoluted, can be considered hard to follow sometimes, and can have events happen out of nowhere. The ideas and themes in Yamato 2202 are bigger and more powerful then whatever was in 2199, but doing that sacrificed a more well thought out structure to carry everything with it. I think it was worth the risk though.

And then the visuals of Yamato 2202 need to compared to it’s predecessor too. Sadly, I’m going to say the same sorts of thing as the last paragraph right here and now. Yamato 2199’s visuals are infinitely more impressive then Yamato 2202’s. While how the characters look and move are the same, it’s the ship cg, dog fights, and the general space stuff that lacks a bunch of detail compared or just looks more fake. For instance, the Yamato’s defense canons in this show are just cheaply made red lights that were probably just photo shopped to look like they were doing something. 2199 had a lot of cg usage in it too, but it’s obvious that there was a lot more processing and rendering time because the first season wanted to make a bigger, more lasting impression. There are just a lot of animation short cuts in here that are immediately obvious. That doesn’t mean that Yamato 2202 doesn’t have some fantastic moments because there are a lot of well animated space tidal waves scenes that are incredibly cool to look at. Otherwise, eh I guess.

So is Yamato 2202 a worthy successor to 2199 and worth watching? I think so. The scope is bigger and has more emotional impact behind it and I those things are more then enough to make it worth watching. Kodai’s journey is spectacular and follows 2199 incredibly well because every decision he makes is consistent through out it’s run. It is still the Dark Knight Rises or Return of the Jedi compared to Yamato 2199’s Dark Knight and Empire Strikes Back. While the former are step backs from the later, that doesn’t mean that the form things have enough great things in them to keep anymore then interested. Watch it after you see 2199. More good space opera stuff does the body and the mind good. And hey, there is going to be a season 3. I hope there isn’t continued diminishing returns thing though. That would suck for this beautiful franchise.