Just a reminder that while I’ve taken O Maidens out of this little review thing, I’m still greatly watching it and enjoying it a lot. Oh, and I will be doing a season at the half way point post next week on Tuesday or something. I’ve just been waiting for Fire Force to hit episode 6 so I can make a fair judgement on it compared to everything else.

This was a great character piece episode between two people thrown away by their parents. Ulgar, who pointed his gun at Luca’s head, was thrown away by his parents by not his brother. A brother that was a reported that got too deep into the Esposito family’s business was killed. Luca Esposito, who was held at gunpoint, was thrown away because he’s not a male like he was registered to me. Luca is instead a they and is intersex or has body parts of a male and a female. Something that immediately dropped him from being the Esposito heir. So with the two being alike, Ulgar drops the gun. Then a tidal way hit their little island and Ulgar and Luca were caught in rising, rushing water. Luckily, Kanata was able to save both of them. I’m just glad that Ulgar and Luca are possibly establishing a relationship thing just by Luca’s teasing alone. Also, how Ulgar has changed somewhat even if he’s his quiet self.

Then the after credit sequence happens and it’s revealed that Charce may be traitor solely based on Aries not remembering him being in her biology class. Honestly, that would make sense. Charce hits all the points of being a Char Clone, so why wouldn’t he be the traitor. I suppose that’s hard to tell for now though. Even if that plot point isn’t true, it’s still an absolutely wonderful episode.

This episode was rather average in execution and seems to feature a souma family member that doesn’t get much attention, Ritsu. A male member of the family that dressed as a woman ever since they were very young and apologizes over every single thing they ever do. At the same time, it’s time for Shigure’s manuscript to be turned in and his editor mitchan demands Shigure turn in his manuscript or else she’ll kill herself. After Tohru’s speech to Ritsu, it’s nice to see Ritsu and Mitchan finding a way to connect each other and thus have them work harder to move forward. A good message in an acceptable episode.

After last episode’s all out brawl, this time we get an entire episode based around Shingetsu and Anna’s relationship. It’s a pretty standard sort of episode to display a character’s weaknesses before they take drastic measures, but I can’t help but admit how engaged I am by this episode’s execution. Here, we see why Shingetsu was adopted into Anna’s family in the first place, like her high level mage magic vs Anna’s very lackluster magic, and how far Anna is going to take herself in order to defeat Shingetsu once and for all. The magic crystal that pushes a witch further even more is going to show up next episode. You know, just when I thought Anna couldn’t become berserk enough…

Oh and Shishou was in this episode and trolling here too. Fun stuff.

A slightly above average Iris focused episode this week. That also means we get some Iris fanservice too unfortuantely. It started with Iris in a vulnerable state thinking about her memories with Princess Hibana during her nun phase of life and at the same time, in a state of washing herself when Shinra shows up causing her to quickly hide her breasts. At least it’s not a gratuitous moment, but that happens after Iris and Shinra have a quick discussion. Iris leaves Station 8 to talk to Hibana, but Hibana immediately gets rid of Iris’ habit, which leaves Iris in her underwear. At least she was nice enough to give Iris a coat to cover herself up in.

The second half was what you expect it to be. Iris is held hostage by Princess Hibana and Section 8 shows up to take her back. Hibana dominated the Infernal from last episode and he was an opponent that Arthur defeated. The rest of Section 8, except for Obi who didn’t show up for some reason, also did a great job beating up Section 5 as well. I guess the Shinra and Hibana rematch starts next week.

I can’t help but be pretty disappointed by this latest episode Demon Slayer. I do think that it’s an emotionally resonant one in some ways, but I am not a big fan of how this episode ended. So yes, the first half with Inosuke being infatuated and completely tied up by Tomioka before Tomioka wandered into the woods. High class comedy stuff with straight man meeting the idiot for the first time. Also, seeing butterfly girl, Shinobu give Zenitsu the antidote for the spider venom had a very touching moment between the two. Good character stuff all around here.

What pisses me off is what happens with Tanjiro with his broken sword vs one of the final boss demons himself. The brother figure who keeps his family together under terror. Seeing Nezuko sacrifice her life for Tanjiro inspired him in the wrong way? Why? Because how the guy operates. He wants everyone underneath his thumb. I honestly wish that Tanjiro and Nezuko’s final attack, no matter how pretty it looked, would have failed because it is such an ass pull. What technique doesn’t Tanjiro have underneath his belt? He should have been saved by Tomioka. Is there anything wrong with having your protagonist lose for once? Really? It’s pretty irritating for me. Tanjiro has that “I have just the thing” for every situation and it’s so ridiculous and stupid. Give him some weakness, please.

This was a fun, laid back episode for this show. It featured Gray, Reines, with some focus on Luvi, with some Waver on the end points. Gray wanting to know more about Waver’s plights, asks Reines about Waver’s experiences in the holy grail war. Of course, this leads to Reines black mailing Gray for the information by forcing Gray to go on a girl’s shopping trip. Something where Reines forces Gray into different outfits, for Gacca reasons probably, and then Luvi shows up and makes them shop for ome things.

Then chaos starts. The shopping complex, owned by Luvi, goes into another dimension thanks to Luvi’s overextension of the shopping complex’s magic. Something that happens often in this show for other building. Gray focused on how Waver would solve this problem, the three together come to a solution. So that leads to a fun moment. Luvi solving the situation by blasting and wrestling guardians protecting the place she over magiced, and blowed up the object causing this situation. Good and funny episode, even if it might seem unnecessary.

Plus, there was the Chunni Girl character who has a crush on Waver, show up. Probably an audience avatar which I can’t blame the show for it. Seeing her shop for scandalous underwear to entice Waver with was kind of laughable and horrifying at the same time. Waver doesn’t have a chance, does he? Oh, things are about to get serious. Rail Zeppelin will make it’s first appearance. I guess it’s time for this show to get really serious then. Wonder how this show will handle all of that.

This episode was completely perfect in almost every regard, because I feel like it completely accomplished everything it set out to do. Episode 6’s backstory is centered on the Danish invasion of England with England deciding to fight back. The first half was Thorfinn’s forced rise of becoming a killer. We see the first person that Englishman he kills, then it continues to montage to other people he kills as he grows up a little more. There is such a feeling of dread over this, but then there isn’t any other way for Thorfinn to currently live in his current environment unless he does become a killer.

Then the second half happens where Thorfinn gets wounded on his scouting mission, but is taken in by an English family for a short amount of time while he recovers. A completely christian family at that, though the daughter keeps arguing against it. I think this is the first time he ever saw the English as real people besides soldiers that he has to kill. That image of the Christian English mother as the vikings raided and destroyed the village like Vikings usually do. It’s a very classic sort of episode in everyway, but when it’s executed so well on every level, how can you argue with the results here? It’s impossible. 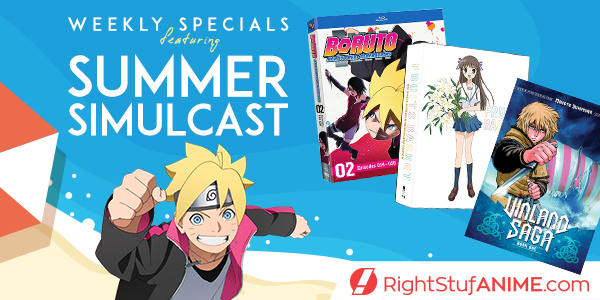