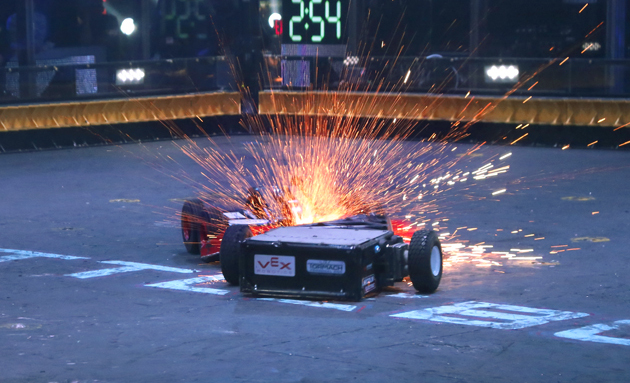 I’m just so glad that BattleBots on TV everyone. I seem to have a distinct history with almost everything I talk about on this blog. Especially battle bots, because I’ve loved this show for forever. There were so many nights as a child that my brother and I snuck out of our rooms at night to watch robots battle each other. I guess this just goes along with that Mecha Anime fandom and Last Samurai weebism that was common in the early 2000’s. (That film is kind of like the Otaku’s dream isn’t it?) But anyway, BattleBots. There is just something so special about it just being back in a new form that makes me incredibly happy. Especially with my even more weebified brain since first watching it long ago.

So what is Battlebots? Exactly what it says on the title. Robots battling each other in combat on a stage to either completely destroy the opponent or at worst, stopping the other robot from moving. Each battle lasts three minutes or less in length depending on when one or both robots stop functioning. Teams from all over the globe, some engineering some not, put together a robot contestant that weighs a maximum of 250 lbf with all sorts of designs and weapons. The vast level of creativity with designs and themes each team puts together for themselves and their robots is always exciting. Huge is a new robot from last year and it has giant wheels made out of plastic with a vertical spinner down it’s mid section. You wouldn’t think something like that would work, but yet it does.

Witch Doctor is at least a level an aesthetic level because of how the team dresses along with their robot. That personality of “we are from the undead” is pretty wonderful in terms of everything. That’s just where it starts though. So each team has a personality to them right? But they also play some interesting roles in my eyes. I know that this show is on network TV and can’t make teams villains, but there are definitely robot teams that can be defined as “villain” and “hero” in my eyes. Tomb Stone, for example, has a very villain mentality to have they drive and their leader thinks. Most robots that face them only last a few seconds before they are completely destroyed. There are quite a few robots out there that can be villains, but only Ray Billings and Tomb Stone can take that role into my eyes.

The main protagonist of each season is that group of MIT, other school undergrads, or any inexperienced people that need to climb up the ranks to prove themselves. That’s how my mind sees it anyway. BattleBots is a tournament and is filled with all sorts of people with different skill levels, driving abilities, and weapon technology from people all over the world. Each one has their own motivations to be there and find glory, but there is always going to be that amateur that wants to show all of these people they can do more then be young and inexperienced. I keep thinking about whether or not BattleBots can be something like Yu Yu Hakusho’s dark tournament in my eyes. Yeah, it works.

Before the tournament really happens and we don’t know the capability of the robots in hand, there is weeks of robot vs robot combat until each robot is pitted against four different opponents. So kind of like Dragon Ball’s old tournaments in a way. Why? Because the judges need to see how capable these robots are and to choose who makes their place into the tournament of the top sixteen. The battles themselves are varied in length and quality just like some tournament anime but still have a max time limit. Some match ups are just terrible because they are either the same kind of bot or are they were aligned terrible. Not to mention the ever possible threat of a robot just breaking down before it can do anything against the other bot. Some teams don’t have as much quality assurance as some others and it just happens. Just like some robots aren’t designed as well as others. Experimentation is good sometimes though.

So with all that, I really do think that BattleBots is anime or animesque just as much as some people consider Wrestling anime or animesque. There are just too many comparisons to be made here that I’m sure I haven’t brought up yet. Yes, it’s live action. Yes, it’s live action television. That doesn’t mean that the heart of anime isn’t in BattleBots. Stick around for some time in the future when I argue about how Iron Chef America could be considered anime as well. Next week, I plan on talking about Promare. I’m seeing it this Tuesday after all.