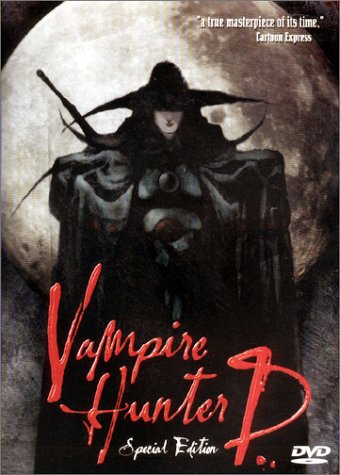 With this post, I’m hoping to put some horror vibes into my blog this month. Yes, I posted about a new horror thing by the name of Violence Voyager which is absolutely horrifying to think about. Still clearing my mind when it comes to that series honestly. Still, I’m not counting it because I was asked to write a review of it. It wasn’t be my own volition, but by someone else. With that, I watched the anime horror classic by the name of Vampire Hunter D. Something that I’ve known about for a while and haven’t dug into until now. Yeah, I consider myself a bad classic anime fan because I still haven’t watched some older classic and major hits that came from the 80’s. With this post, I hope to rectify that somewhat. Let’s talk about Vampire Hunter D.

Our story starts in some unknown time period of history around an unknown village in a vaguely post apocalyptic setting. Doris Lang, the daughter of a former werewolf hunter who dieda little while ago, is making her rounds protecting her village at night. She rides her horse and fights off all sorts of monsters with her gun until everything starts going wrong. Her horse gets wiped out by Werewolves, her cross necklace around her neck is taken, then she is bitten by a ten millennia old Vampire count by the name of Magnus Lee. Immediately seeking help, Doris searches for a vampire hunter and finds D. A tall, mysterious, and powerful vampire hunter with a large sword and a talking hand for some reason. With that, the plot really takes off.

The entire movie is about D’s quest to destroy Count Magnus Lee. That’s it, that’s the entire story and plot. But, there are other elements and characters that play into this aspect that. Doris is a plot device because she’s the one that put everything into motion but that’s not all she is. With that vampirism in effect, her village has to decide what to do with her before she becomes a vampire. Go to the camp where she can die horriblyor, as D suggested, let her be. Considering how horrible the camp sounds, I’m glad that D spoke up. Plus, Doris is given some agency when she physically beats up the creepy, playboy Greco who wanted to buy her allegiance and marriage plus deciding her own fate. You know, along with her actions in the opening scene. Surprisingly progressive even if she is victim here. There is also Doris’ brother Dan who D is teaching to be sensitive for her sister who is suffering from vampirism and is threatening the town while also being tough. A lot of people can learn from D.

On the other side of the equation are the villains who are more complex then I thought. Not the count himself, but his relationship with his servants. Count Magnus Lee started his hunt for Doris because he gets horny for a human girl every fifty years. No, I’m not kidding about that. Does an old vampire need another reason? From that stretch some interesting intricacies like his Daughter, Lamika. She holds herself as a noble, but is she? Is her blood as pure as she thinks she is? Watch to find out, but I bet you know the answer because I’m asking these questions. That interesting and humanizing moment when Doris and Lamika were in the same carriage and had the same thoughts about the situation at hand and not liking how Magnus is causing this situation is wonderful. Oh, there is also Rei the time controlling demon who fights against D a lot and loses. His constant losing shows how Magnus deals with people he considers below him with power.

If there is something good and bad about the story telling in this movie, it’s everything is very need to know basis. There are good elements like learning more and more about D over the course of the film which continually makes the film interesting with that sense of momentum. Wondering what’s going to be revealed next is a very good way to frame an origin film. Considering that D is a strong, silent type like Kenshiro from Fist of the North Star, this type of story telling works in a character building way too. Same for all the other characters that show up and are slowly revealed and built up through out the film too. Plus, vampire hunting and killing is a pretty classic tale to frame a story off of. Knowing people is what makes this film work. So no complaints there.

The negatives I have are wanting to know more about this world. It’s this bizarre mix of medieval design with some modern technology. Like, D rides a mechanical horse, there is technology like cameras in these medieval houses, and there are technological aspects to Magnus’ mansion that makes it look like a factory. What’s up with all of that? I want to know more. The whole the thing reminds me of a Hamlet movie I watched in high school that didn’t belong to any time period because weapons and locations were all other the place from a time line and historical stand point. That was done for a reason to show how timeless the story is, but this is different. There is a story to this world that this film doesn’t reveal. It could be because of aesthetics that the creator likes or something else, but whatever it is I want to know more. Cursed origin film nonsense. Tell me about this world!

For a mid 1980’s film, Vampire Hunter D looks amazing. Maybe that is the standard for 1980’s ovas and such because of Japan’s economic boom where extra money was available for producing good looking shows but so what? When something looks good, it looks good. Scenes were shot and directed to carry horror aspects, character designs were distinct and interesting, the art design for the gothic and medieval look was solid, and everything else including monster designs. Plus, the action animation was incredible to look at as well with D and others fights looking fluid or the solid movements from characters jumping from one platform to another in later parts of the film in Magnus’ castle. Other things may have aged badly, but not the visuals. Never the visuals.

It’s visual and plot aesthetics aside, I wouldn’t call Vampire Hunter D a horror anime. It’s more of an 1980’s shonen battle anime with vampires, werewolves, and other monsters on the side to create it’s own distinct feel. The vampirism in question and how the town deals with it is there, but it’s not important. Just scenery stuff. Still, it is a wonderful sort of thing to watch around the Halloween season because it’s something unique and interesting thing to do. Why? Because it’s a classic story and yet it isn’t. That edge makes it something genuinely worth watching. An hour and a half film of fun vampire fighting shoneny tales that not many things can give you. You know, besides some obvious things. Definitely recommended I think. I need to see if I can find somewhere to watch bloodlust for next week. If not, I’ve got some other ideas.