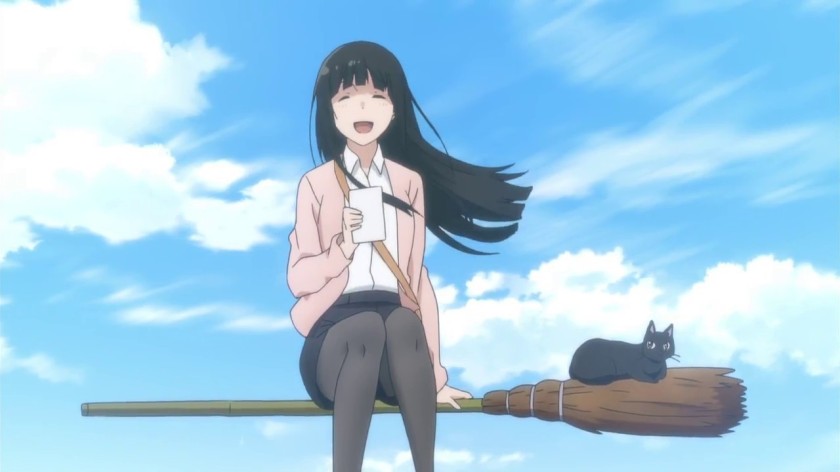 Another month, another OWLS tour post huh? Yup, nothing unusual about this at all. I was originally planning to skip out on this month’s tour considering that I am more of a science fiction fan then a fantasy fan. There is just something about basic and typical about how most fantasy stories are structured and told that just bothers me. Why? most of them have the same sort of story and character tropes most of the time. There are some strange exceptions that I really like though. With that thought in mind, something hit me. What if I talked about a fantasy series that had an interesting angle to it? Something other then another, typical fantasy adventure series. That lead me to the choice of anime that I going to talk about today. Excited? I know I am. Flying Witch is fun!

If you want an OWLS post from someone who truly loves fantasy, check out Shay’s video about from yesterday. It’s something special that you don’t want to miss. Oh, I should probably talk about OWLS.

Our October 2019 OWLS Topic Requested by Aria from the Animanga Spellbook and written by our Chief Creative Officer Lynlyn is “Fantasy. To be more specific:

In the month of October, we will be exploring the world of fantasy in pop culture. The genre of fantasy focuses on telling stories about our external and internal environments. There are many ways we can interpret the word, fantasy. For example, we can talk about how a fantastical place could glorify what reality should be or the dangers of ideal expectations. Fantasy could also be seen as taking a “wild journey” or a “hallcuination” and how that can affect our psyche and well-being. Fantasy can also focus on our personal dreams and expectations and how those expectations do not align with our reality. Overall, our posts will reflect on how we view the fantasy genre and what we can learn about these pop culture mediums.

Flying Witch is an iyashikei or healing slice of life series featuring a young, high school aged witch by the name of Makoto. She traveled from Yokohama where her home is to the rural area at Hirosaki, Aomori to complete her witch training. There, she stays with some extended family who enjoy their non city focused life style. Makoto doesn’t know anything about farming while her family doesn’t know anything about magic, so the two sides introduce these things and wonderful and comforting in some ways.

The main cast of the story is great and everyone has their own sort of personality to them. Makoto is the newbie witch who knows magic but has to practice it while being infinitely curious about the world around her. Her curiosity makes her the best protagonist for this series possible. Especially with familiar cat Chito who has an attitude like most cats do. He does a good job of keepinf an eye on Makoto with his very uppity and proper personality. Makoto’s sister Akane and other witches show up to add some color to the journey as a whole and I love every magic character in this show.

On the other side are our non magical cast who have their own charm to them. Makoto’s cousin Kei is the same age as her and is sometimes called an old women because he does most of the chores around the house like cooking and such. Kei’s younger sister Chinatsu is the show’s bright spot because she’s so full of energy and as curious about Makoto’s magic and Makoto is curious about normal things. Plus, Chinatu’s interactions with Chiito are great. Their parents to make a more then strong appearance in the series itself in a lot of ways too, but they aren’t the main focus of the series. I do really like them though.

If you read my plot summary paragraph and thought about how this show’s premise sounds very similar to a certain Ghibli movie by the name of Kiki’s Delivery Service, you are right. This series is heavily influenced by a lot of things from Ghibli and Flying Witch doesn’t hide it’s influences. Instead, Flying Witch indulges in those references and makes them it’s own thing in a natural way. Kiki is alone in her witch training, but Makoto gets a lot of guidance from her older sister that pops in from time to time so Makoto has the support system that Kiki never had. That element carries this show’s softer mood.

There is even a little bit of a Castle in the Sky in Flying Witch. This anime’s universe has flying invisible whales (to normal people) that carry ruins of ancient civilizations on them. Makoto, Kei, and Chinatsu take a trip up there to investigate and it’s one of the most interesting and beautiful places in existence in this series. Flying Witch is full of those fascinating world developing elements. I mean, how cool is when the Harbinger of Spring knocking on the door to greet you, the veil of night eating at a café that a witch can visit, fish that appear in the ground during festivals, or cafes run by a cute, shy ghost? So cool!

Flying Witch is full of these wonderful fantasy elements that just come out of nowhere with some more normal, grounded spells involving transformation people into animals, summoning crows, and other things. It’s that since of normalcy and wonder which really adds some soft and fun elements to the show. There is no anger or meanness in Flying Witch’s magic and story telling, only kindness. Kindness that captures Chinatsu and Kei’s interest and hearts. Chinatsu’s more then Kei, but that’s because it left her with strong impressions at a very young age.

If there is a lesson to Flying Witch, it’s magic is everywhere. Including everyday things. Just because you do something all the time doesn’t mean that it’s not magic for everyone else. I mean, modern technology is magical to anyone from history. Makoto learning to love and be excited about normal things and Chinatsu and Kei learning to love the magic that Makoto brought to their lives is the message the show is going for alongside the healing it brings the viewer watching it. Flying Witch’s positive environment is inspiring for it’s cast and everyone else watching it. Be sure to remember there is magic in your life even if you can’t see it right in front of your face.

Thank you for reading everyone. If you need more OWLS content, Takuto is posting about Sword Art Online: Alicization (for some reason). Is that enough? No? Please look at this OWLS tour schedule to see who is posting when and check out their blogs and their posts. I’m keeping an eye on you so you better do it.