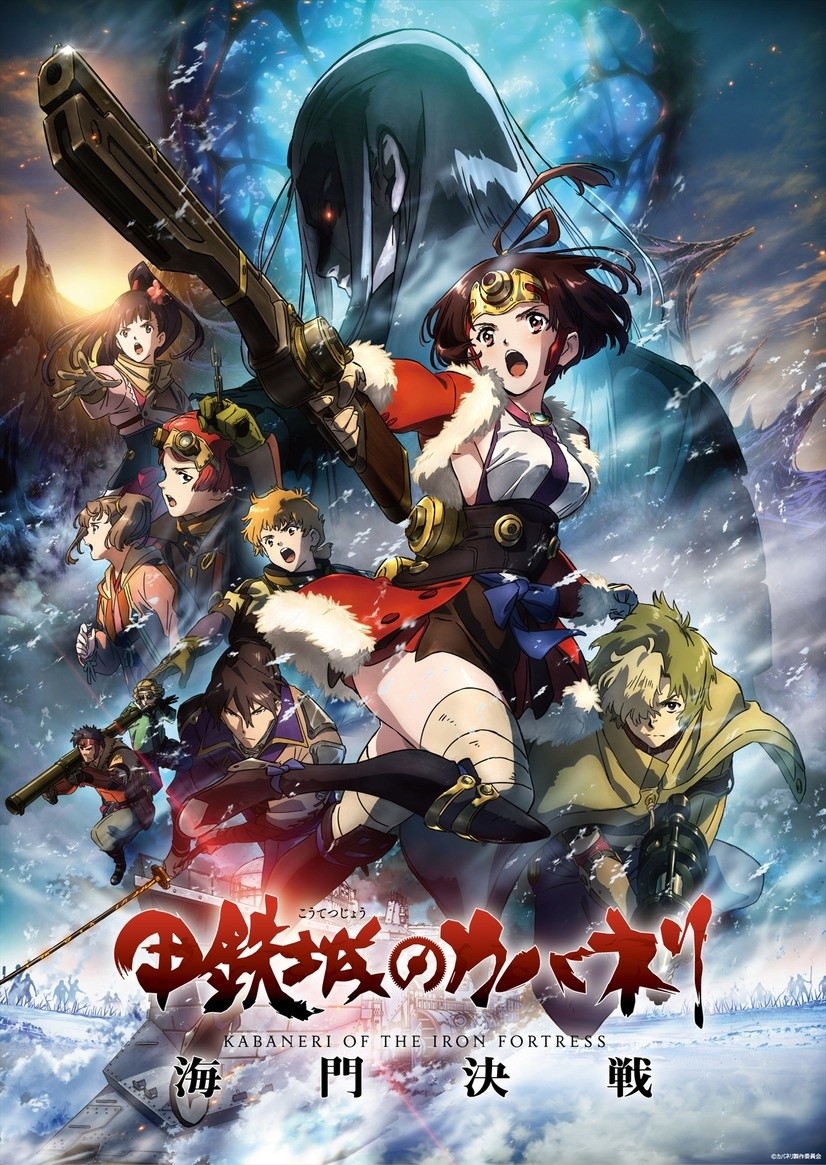 How like me is it to save an actual horror sort of movie thing for the day after Halloween. Kabaneri was never pure horror anyway, but I think that says almost everything about how my state of mind works. As I’ve said before, I’m not a fan of straight up horror things unless they are psychological or twist around the genre quite a bit. That’s why I’ve mostly focused on science fiction things with a side of psychological and body horror for this week. I don’t know what it is for me, but unless something can nail psychological horror, I don’t think that horror is a good stand alone genre. There just needs to be something more to it is what I am saying. Yup, that’s why science fiction. With that, let’s not jump to the future this time. Instead, we are jumping to a strange past of steam punk technology and zombies. Two for one deal.

With this film, we return to the land of Kabaneri again. This is a sequel movie/ova of a one cour series that came out in 2016, so there is a lot to talk about here in terms of it’s world and setting. To be brief, Kabaneri of the Iron Fortress is how Tetsuo Araki would have approached writing Attack on Titan himself. It takes place in a very steam punk era of Japan that still runs with feudal system as it’s government. Some people dress in traditional Japanese garb, there are some sword carriers alongside steam punk gun users, and our main protagonist team rides on a train called the Iron Fortress from place to place fighting against heat or steam punk zombies. Those zombies are called Kabane and Kabaneri are that in-between state between zombies and human beings. Basically humans with kabane strength. There is a strong racism against the Kabaneri for obvious reasons, but the crew of the Iron Fortress grew together as a unit and learned to trust their two Kabaneri, Ikuma and Mumei, who helped them out in dire straights in important battles of survival. That’s the show in a nutshell.

The best and worst thing about the Kabaneri of the Iron Fortress series is how straight forward it is. What is this movie about? The Battle of Unato. What does the title say? The Battle of Unato. There you go, simple explanation of this movie’s plot. The Iron Fortress and it’s Kabaneri are fighting at the Battle of Unato. Of course it’s all more complicated then that. There are a lot of elements to explore here. The area called Unato is the last stop before the Iron Fortress can make it to it’s home city to plant rice and live happily for the time being. Unato is a fortress town that has a hilltop castle that the Kabane completely infest and threaten the people living in the area. The train rails are also damaged, so there is no quick passage through it or around it right now. This leads to all sorts of military units and trains meeting up to take on the forest and gain a victory for mankind right now.

Of course there is more complicated things then that going on to that are pretty blatant. Kabaneri racism is rampant through out the film. Nothing is held back here. The other military forces don’t trust Ikoma when he tells everyone at the meeting about how the Kabane are fighting and attack with a mind behind them or there might be a special entrance the Kabane are coming from. Of course nobody else but the Iron Fortress listens. The other trains suffered for it in the ensuing battle, so that racism hit them strongly. It doesn’t help that Ikoma was suffering from madness and was losing his mind to the Kabane side of his himself. After that, he was locked away and quite a few times before being let go. Of course this is the theme of the story. Exploring racism and the dehumanization of special groups of people with the Kabaneri’s forced dehumanization.

With the short length of this film, the focus and exploration of the Kabaneri and how they are treated is something that was a brilliant thing to explore. Especially since that Kabaneri is in the title of it. In this universe, they are second class citizens. Maybe not on the Iron Fortress, but they are in society itself. The Iron Fortress people going “I’m sorry that he’s treating you like this, we are taking him back to our train now.” That’s still dehumanizing and that feeling of hate and fear from the normal humans directly affected both Mumei and Ikoma. It wasn’t the Kabane that turned them bad, it was the humans. The first Kabaneri (as far as we know) or our boss was one hundred percent in that realm too and tried to kill humans on purpose in rage that humanity created itself. Plus to protect his daughter. Only when Mumei and Ikoma embraced each other did the hate dissipate. Something powerful and meaningful.

That leads to some characterization which Kabaneri isn’t the best at. I suppose that was true for the series too because the Iron Fortress and it’s crew was just one character that learned to trust all it’s parts and different sides and grow together as it moved on. Battle of Unato tries to break away from that a little bit by focusing on four different relationships. The first one was between Ikoma and Mumei where their bond and strength was tested through their hard times. Mumei is the young kid that has a crush on Ikoma, but Ikoma keeps straying away from for one reason after another so there is some challenge here. It’s nice to see them come to an understanding in the end. The fact that they want to be human again says it all. There is also a relationship between the Kabaneri in the castle and a man who used to be trusted by him, Sukari our steam smith, that was explored a little bit too. Sukari never spoke up to the guy’s character leading to everything here. It’s very on the point like most of Iron Fortress’ material, but sometimes being blatant is the best way to go.

Then there is the growing bond between our young leader Ayame and her body guard, Kurusu, in a body guard crush capacity and Ayame gaining her own sense of strength and leadership. Some scenes established this and it was adorable to watch. Plus, Kurusu is obviously a kuudure type of character, but there is slightly enough material in him to make him more then just a stereotype. I can’t help but say that I have a thing towards young people being stuck in situations where they have to learn to be leaders like Ayame, so I have to say that I really like her. There was small side thing between our muscle train driver girl and kid mechanic who is Ikoma’s friend was there too, but it wasn’t as prevalent either. I’m glad all of these happened to separate them from the blog of people from the Iron Fortress. All efficiently added into an hour and a half movie.

One of the great things about Kabaneri of the Iron Fortress because its art design are something you don’t see in a lot of modern anime these days. For instance, the effort that the show puts into it’s character designs by having make up designers give each character a different sort of face color to differentiate people from one another in that way is rather rare. I can say the same thing towards what characters are wearing and their designs too, because no one besides train technicians wear the same clothes. Everyone looks different from each other with their late 1990’s rpg character designs and it’s great. Something that is needed when not much characterization is given to its characters. Plus, the action animation with steam punk on the side is some of Wit Studio’s best. Especially when large steam punk zombies exist for characters just to fight. Very 1980’s and 1990’s ova sort of fun.

That extra effort made it into the mechanical design too. For instance, so much time and energy is put into the Iron Fortress’s insides and working guts. A lot of time is also spent in the technical departments and locations of the Iron Fortress that it’s completely believable in how the train functions. It’s steam punk after all and there was a lot of thought put into the trains design and how steam and energy goes from one place to another that it’s incredible. Also, the train weapons are worth talking about too. The huge train cannons that put out from the tops of the train and the ammo loading sequences. Plus, all the steam rifles that every soldier carries are wonderfully detailed and interesting. There is the rifle part and then the backpack that carries all the steam for the gun to fire and it’s just so beautiful. Thank you so much for all of this, Kabaneri and Wit Studio. I wish this was more popular and got more seasons.

I came into Battle of Unato expecting just more mindless steam punk zombie versus people action, but what I came out with something more. Yes, all of that mindless zombie action and steam punkiness exists and the movie excelled at that, but the themes and deeper effects on racism on people was mind blowing. No, this movie didn’t set out to solve racism by itself or try to make racism logical. In real life, it’s not logical at all. It just exists and Kabaneri being as simple and straight forward as it was made everything hit harder and feel more real somehow. Combine that with the old school sort of visual aesthetic with all sorts of extra effort put into the machines and it’s such an amazing film that I want to watch again immediately. I don’t know if a person can walk into this film without seeing the series first and take in everything as well, but I still think it’s doable. I wish the series wasn’t stuck in Amazon land so more people could see it before watching this on Netflix. Having multiple places to watch anime is such a pain sometimes. This is one of those times.

There we go. With this film, my week of Halloween films had ended. I hope you all enjoyed the train ride and enjoyed about what I might have to say about some anime films. Ok, good anime films that I enjoy. I don’t have any projects on my mind at the moment besides Mecha March in the future, so I hope you can all stick with me until then. Thank you so much everyone. I really mean that.