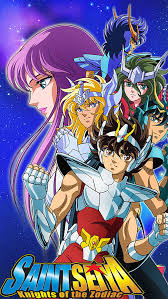 With Dragon Ball Super out of the way, I’ve had to look for yet another longer shonen series to talk about in parts. Why? Because this is yet another thing to keep me and my blog focused when it comes to not mecha content. A few years ago I started reviewing part Fist of the North Star, then Dragon Ball Super was something I talked about somewhat regularly until I did my retrospectives that didn’t do too well. It is what it is. Luckly Netflix came up with the answer when they touched up and redubbed the original Saint Seiya series after their disaster of a reboot make its appearance. I have been wanting to watch this series for a long time and it actually was available somewhere legally for me to watch. Much easier and less expensive then Giant Robo to watch. Now I have my chance. Only seasons 1-3 have appeared on Netflix when I started writing this post, but I heard more Saint Seiya would appear in early January. Kind of excited about it.

Saint Seiya is an older shonen series that comes with a lot of fun and wtf moments. Some I talked about in a post a couple days ago. I can’t help but love all of it though. It’s really hard to describe what Saint Seiya is in one sentence, but I would say that it’s a shonen series masquerading as a reverse harem series or possibly a magical boy series. How fun are those two things? The over all series so far has attractive bishonen characters in battle armor protecting their leader who is the reincarnation of Athena rebelling against the corrupted system that holds all saints under it’s wing. The villains are from Sanctuary and lead by the pope. Not exactly a roman catholic thing though. Unbeknownst to a lot of people, the pope was secretly killed an undetermined time ago without anyone’s notice. To saints under sanctuary, the mock Athena’s rebellion makes no sense to them. So here we are with three seasons of fun and chaotic set up before season 4 where everything has come together.

As is established in the series, Saints are warriors who are trained to use power called cosmos to use for all sorts of different abilities. Each Saint in the series is sent off to different islands at an extremely young age to be trained in the ways of their island and/or area’s cosmos until they either win the right to wear armor called cloth or die. Luckily, our all saint friends came back. There are three levels in Saint Hood. Bronze are the weakest ones, silvers are the in be tweens who are even more powerful, and Gold Saints are literal gods on Earth. Each saint is named after something in ancient greek lore until you get to the 12 gold saints who are named after the 12 Zodiac Constellations. So when a single Gold cloth appeared at the beginning of the series and is completely unmanned, you have to believe that it’s a huge deal for everyone in this series.

There are also female saints. They are virtually the same as male saints except they are much more rare and have to wear masks to cover their faces. I’m not going to tell you what that is because it’s a plot point revealed later in season 3, but it is a bit sexist. Not as sexist as you would expect because female saints to play a pretty prominent role in the series itself and can kick serious ass. Why? Our main boy Seiya was first trained by a female saint named Marin ever since he appeared at his training grounds and Seiya’s first legitimate opponent who wants to kill him is named Shaina. Still, I am not a fan of the mask thing because I’m not a huge fan of the plot elements that came from it even if I do personally ship Seiya and Shaina. Such complicated points of view, don’t you think? Things can be problematic but good.

I really like the main cast of this series even if they are simple characters. Each one has a good arc to keep them going. Saori is the leader of our bronze boys and she must come into herself knowing that she is Athena while also treating her saints with more kindness. Our saints are all orphans. Pegasus Seiya is our main protagonist who has a lost sister and is endlessly searching for her while protecting Saori in all sorts of situations. Cygnus Hyoga is my favorite because he’s the ice boy who is also a massive mother’s boy. Nothing wrong with that, because he’s the most intelligent one of the group. (The mangaka’s favorite character?) Andromeda Shune is the soft boy of the group who cries a lot and worries about his brother, Phoenix Ikki, who returns home evil then softens a little bit. Dragon Shiryu is the character who constantly sacrifices himself for his friends leading to injuries that don’t always heal. There are other saints that appear in the story who have tons of weight like the steel saints, but they aren’t important.

With all that context out of the way, let’s talk about some of these seasons. Season one of Saint Seiya starts out in a battle shonen tournament format with the Galaxrian wars. A tournament ran by Saori/Athena and her Graad Foundation. Seiya and his friends must fight each other in a tournament in order for one of them to obtain the Gold Sagittarius Cloth. It’s pretty clear that the original mangaka didn’t know what they wanted Saint Seiya to be when writing this arc because half way through this season at episode 6, it changes. One of the Saint’s brothers appears and steels the cloth with his black cloaked death army. The next six or so episodes are the Saints recovering their damaged cloth to win it back. Except all of it was taken except for the head piece by Sanctuary itself.

I feel like seasons two and three could be considered the same thing even if there is somewhat of a clear difference. This is where Saint Seiya finds its steam and figures out what it wants to do and what it wants to be. Of course, these parts could easily be described at “search for information” for our saints to see who is fighting them. Along with that, these are very character exploratory portions which some filler thrown in to fill out character’s backstory. I didn’t mind the filler, even if some of it is ridiculous, because it was merged in pretty well. All the while, sanctuary continually sends stronger and stronger assassins after our favorite saints leading to their deaths most of the time. A lot of innocent saints who don’t know what is going on have to die thinking that they are fighting for what is right.

Our bronze boys managed to fight off everything that is thrown at them including a lot of silver saints. Real drama builds when gold saints appear at the end of season three. The bronze boys start their journey toward defeating Sanctuary even if they won’t return home alive. Oh man were these seasons so good to watch. Each filler fight only last an episode or two so they didn’t weight the series down and are generally fun honestly while developing characters furthers. They put a lot of thought into this series’ filler which is pretty great. Plus, the last season was very short and really drove the stakes home with the threat of the ultimate power of the universe against our saints. I can’t wait to see how they fair going from temple to temple in sanctuary next season.

Before digging into more visual and final thoughts, I’m not surprised by how there is a larger female fanbase of this show anyway. I don’t just mean the bishonen men fighting each other and sometimes being shirtless and everything or Athena’s reverse harem situation going on here. That material is kind of obviously honestly. I’m kind of stunned by how horny the series can be with some of it’s male cast members. The first silver saint that makes an appearance just casually strips his clothes off and bathes himself when he thought he killed Seiya. Why? Because a Silver Saint needs to be clean after all. Good enough explanation for me.

Also, there is the villain reveals which the fake pope either appears fully clothed or not wearing anything at all while taking a bath and discussing his plans to himself. First you see his abs and then everything else in those scenes. Kind of shocking because I never expected these before they did. I’m not saying this because it ruined the series for me, because the fanservice didn’t, but because I haven’t seen as much male focused fanservice in a lot of other places in fiction honestly and I’ve watched a lot of anime. I just kind of found this interesting. Honestly, it’s only fair. I might be open for more male fanservice in the future for balance.

With that, let’s talk about the visual aspects of this show. For an 1980’s long running shonen series, I’m kind of astonished by good the visuals are. I don’t just mean the character designs and such, but there are a lot of well drawn backgrounds with a lot of creative visual direction them behind them. For instance, I can see where Dragon Ball Z got a lot of it’s fighting locations around mountains from. Saint Seiya has a lot of beautiful mountain battles. It starts with how great the galaxrian wars’ tournament setting and just continues on from there in visual creativity. I’m also shocked by how many good cuts of fighting animation there are. Some of the destruction scenes are pretty eye droppingly amazing. Of course, there is a cost. As you would expect, there is also a lot of noticeable stock footage that are used over and over. You can will the Saint’s power ups, cloth appearing on their bodies, and attacks more times then you can count. I think that’s a good pay off for everything else though.

So what can I say here besides I really liked all of Saint Seiya that I’ve seen here. I’m not just saying it’s perfect. Nothing is, but Saint Seiya has plenty of faults in it. I just talked about a few seasons of a long running shonen series which revolves around some ups and down and slow downs with older animation, but I do think this ride was pretty good. It’s simple enough of a show that you can just have it on in the background and completely understand all of what is going on, but there are a lot of solid character and animated moments that will demand your attention to them. At least, that is what happened to me. The heart and soul of battle shonen series was there since the beginning and you can see that here. With that, Saint Seiya’s first three seasons get a good rating from me. A fun time all around for all shonen battle fans if you can get past some older animation and a small amount of other outdated material.