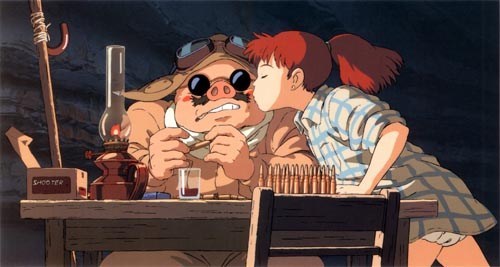 You know what all of this is about, right? It’s exactly what the title says. I reached a 1,000 followers, people asked me a lot of questions and I’m here to answer them. Thank you so much, everyone. I’ve got a lot of questions to ask now, so let’s do all of that now. Yay fun pool of questions.

For this event, I had to split this post into two versions. I just had so many questions from Twitter AND WordPress that it felt like the logical choice. Especially to keep it all readable somehow. Pretty for the wordpress edition on Thursday. It’ll be a little longer, but that’s ok.

What is one anime that you always find yourself coming back to, either through a rewatch or just in thought?

I don’t really rewatch anything without reason or without considerable time before hand or something. Still, this is an easy question to answer. Ghost in the Shell: Stand Alone Complex and Kino’s Journey are constantly on my mind in one way or another. I use both of them to unfairly compare other anime to them or I just want to think about how great they are. Sometimes both. I just really like these two shows.

From Matt In The Hat!

What are your top 3 favorite games?

This is hard because I’m not much of a gamer. Just going to have basic bitch answers here. Shadow of the Colossus, the original Star Wars Battlefront 2, and Sins of a Solar Empire.

What are you top 3 worst games?

I have no idea honestly. As a person who doesn’t game a lot and only has started getting back into it, I don’t think there has been a game that I really disliked. I’m not going to go for easy answers either for controversial reasons. So sorry, going to have to abastain here.

From Taryn of Dragon Codex!

How did you get started?

One of my favorite podcasts that I listened to all the time was called Podtaku. It featured four different bloggers that I followed and loved all their content. That podcast ended about four years ago. That was my link to the otaku community as a whole. With that link mostly gone and me not having any editing ability for youtube videos, I created Mechanical Anime Reviews to find my own otaku sort of community and it really worked. I’m so happy that my project worked. It’s not my major focus anymore, which is why I have a new one I think.

What anime is your absolute fav?

Ghost in the Shell: Stand Alone Complex. I’ve talked more about why here, but it’s just a special anime series for me because it’s nearly perfect in everything. It’s a very intelligent series, has great world building, great characters, and looks gorgeous. Read more here. It’s a collab with Blue’s Anime.

Do you have a guilty pleasure anime?

YES! The Appleseed franchise. I love how cyberpunk, mecha, and how just generally stupid it is. The first cgi film tries so hard, but completely fails at being meaningful for me. Afterward, they didn’t try and just had fun which worked better for me honestly. I have a post for this.

Which anime would you recommend to a new viewer?

I would usually suggest people to give me a genre they like and then I would suggest an anime series. That would probably have a greater level of success. In general though, Full Metal Panic and Hunter X Hunter. Both series explore a lot of what anime has to offer in various ways which would would give the new viewer a taste test for what they want later on. For more of that, just read here.

Is it always just about the Anime?

Not always because I like a lot of other things. I read books and watch some interesting live action television series. Some of that has leaked onto this blog, but that hasn’t been as successful, so I mainly stick to anime and manga.

From That Random Editor!

How do you maintain the blog?

I basically just keep to my own blog writing schedule. I write my big posts early in the week when I have the time to write them and write my seasonal posts as I watch seasonal anime. Seasonal anime don’t take as long to write about because they are focused on one episode at a time, so it’s easier for me to put them together. Especially when I jam all my episodic opinions together in once post. You can read more specifics about it here. I apparently have a post for everything.

Akane Tsunemori from Psycho Pass Season 1 and the movie. She’s cool, adult, intelligent, and just kicks ass. Also, she’s really grown up a lot in the movie in a lot of ways and she’s a brunette which I have a thing for. (Gah, that’s shallow.) Basically, she’s perfect.

I honestly have no idea at this point. I’m not just going to call a series bad just for the sake of it, so going to just abstain here.

Tower of Power. I’m a brass player and I just love their songs and their band section. They are almost perfect for me. If you combined jazz with rock and roll, this is what you get. The perfect blend of awesome music.

Second would be either Chicago or Earth, Wind, Fire.

I don’t know at this point. I have so many blog post children then I love that I can’t choose between what I consider my best. It’s just so hard. Wow, so full of answers for this questioner aren’t I?

What’s you’re favourite retro sci-fi anime series/film? Something you feel is a must-watch for fans of the genre?

I’m going to go with the 1995 Ghost in the Shell film for this one. It’s an 85 minute wonderful film full of world building, action, some character building, and a lot of interesting philosophy. All in a short package and you don’t even have to watch anything to watch it. There is a reason why this classic film is a classic. It’s the film that will get you interested in the Ghost in the Shell franchise as a whole. Just watch it, ok? Much more on that in October if everything works out as a planned.

Whose your waiful from Mecha Anime?

If you know me and have seen my waifu lists, it’s Hamon Karn from Zeta Gundam. She’s just powerful, sexy, seductive, intelligent, in control, a powerful new type, a great leader, and a fantastic pilot. What else can you say here? (I think I showed more of myself again. Uh oh.)

Who were the bloggers/anitubers/people who inspired you to be a blogger?

I already mentioned this in other places in this Q and A, but Gigguk, Glass Reflection, Holden Reviews, and Jean from Anime Appraisal were the ones who influenced me into blogging after their Podtaku ended. A lot of things have changed since then like Gigguk no longer being interesting anime more and two of those are not on youtube as much or just stopped, but Glass Reflection is still pretty fun.

Who also inspired you to improve?

A lot of people. Readers, Karandi, Irina, and myself. Karandi and Irina are people are bloggers that I want to catch up to and are heavily influenced by forward. To do that, I have to try to at least attempt to make each post better then the next one and make them fun and readable somehow. That honestly takes a lot of work.

Continued in Part 2 on Thursday