I’ve bent the definition of what a Mecha is quite a lot through the course of this Mecha March event. You know that already because of my Cyborg 009 post. Cyborgs aren’t pilotable robots, they are technologically enhanced humans. Here, I am pushing the envelope even further now. Here we are with armored Fursuits with technology in them. Full Metal Panic’s chief mecha are called Armed Slaves, but Bonta-kun are cute bear suits with Armed Slave technology that fit inside them somehow? It works. Even if it doesn’t, too bad. I have a running tradition of having Mecha March with Full Metal Panic and I am not stopping that run this year. Next year is going to have relook at Invisible Victory! Look forward to that.

For my previous reviews of FMP!, this is a link to my review of season 1 and this is the link to my Second Raid post.

As you can tell from the change of mecha from exclamation point in front of it’s name! to the ?, Fumoffu is and is not a series that is attached to the over all Full Metal Panic! Story at all. Fumoffu is amount those big in between, episodic stories of Full Metal Panic by taking a lot of the comedy from the first seaons with Sousuke’s weapon and gun mishaps at school and then elevating them to another level. Fumoffu is the comedy and slice of life to The Second Raid’s drama, combat, and depression where the characters are pushed in a much more different direction. I did wonder why Kyoto Animation did this at first, but I think they saw the potential in this sort of series for this franchise and ran with it. Oh boy did they run hard. You can enjoy Fumoffu if you haven’t seen the series proper, but a lot of the jokes won’t make complete sense to you and the characters will come out of nowhere to you at first if you haven’t watched season one. Still, that shouldn’t dissuade you at all. Join in the fun please. The water is fine and hilarious!

What makes Fumoffu work so well and so funny? I don’t think that explaining a joke is a good thing, so I will try to go with some very quick and consiece answers so I don’t ruin everything that is going here. For starters, let’s talk about the characters first. The main characters Kaname Chidori and Sousuke Sagara, and the side cast are full of personality and bounce off each other very well. There is a great chemistry and repetiore between them that you can tell they’ve been around each other for a long time. There are layers here that help everything. Kaname as the tsundere girl who has a crush on Sousuke who is very military and doesn’t understand non military things, but she is also very athletic and loves wrestling and yakuza movies. Sousuke is a military nut that doesn’t understand normal civilian things, but he’s still a good person because he helps and saves Kaname all the time. That’s where her crush comes from. So the usual dynamic is Sousuke does something really dumb and Kaname makes him pay for it is pretty fun considering the situations the two become involved in and you see that in season one, but that gets twisted around her a lot.

With all the craziness and fun character interactions from all sides in the story, there is more then a little bit of romance here too. There is always a calming moment in the middle of the storm which just feels right and romantic between Kaname and Sousuke. The quiet in the chaos. Those touching moments when Sousuke doesn’t even completely understand that he is being romantic, but Kaname does. She feels those moments and lives in those moments That’s the beauty behind of fumoffu. the romance is in character for everyone involved and it’s just so unexpected. That tells you that Sousuke is a good guy when he doesn’t think with his military jargin brain. He should just learn to just go by instinct and he’ll be good.

The second aspect that allows Fumoffu to work is the way it subverts different genres of film and other media in it’s own Fumoffu way. Part of the fun of watching Fumoffu is seeing what happens next. Some episodes start off obviously by having a character like Kaname watching a type of film or tv show she enjoys and then commenting on the flaws she’s seeing. With those, you instantly know what the episode is going to be about even if you don’t know how it’s go or actually end up. It’s element of hilarious suspense that can keep you going. Let me just say this, while some episodes revolve around characters doing similar things to what is represented, the reasons for why they happen are different along with the end result. It’s that variability that makes this show work the way it does.

There are also those moments when Fumoffu bends a genre around it’s finger when it feels it at appropriate or inappropriate moments that become appropriate moments. No matter what, Fumoffu will catch you off guard. Going in expecting something or expecting nothing doesn’t change much when it comes to Full Metal Panic? The only people who know what to expect are those people who have watched it before and even then, there is the reason why some of us actually return to this series from time to time. The jokes are funny and work. Unexpected doesn’t always work, but Full Metal Panic? Fumoffu is a well oiled comedy machine of madness and I wouldn’t have it any other way.

Lastly, Full Metal Panic? Fumoffu is artistically beautiful. I might be wrong about this, but I feel like this is the series where Kyoto Animation used to character animation, insane facial expressions, and change of camera angles and lighting for series that appeared later like Nichijou and some others. Besides this show being 4:3 and some small amount of lazy bits of animation and art here and there, Fumoffu could be airing right now and no one could tell the difference. The over exaggeration of facial expressions in the right moments with facial sweets is perfect. Those moments when you can see a character trying to keep their composure but failing are great. Same with the variety action scenes of action scenes which casually pop up for no reason and are just perfect. Kyoto Animation must have had a field day putting together this portion back in the day.

Since I’m doing this as a mecha series review, let’s talk about the mechanical design of Fumoffu. No, I’m not doing this just to joke about it, there is a lot of effort put into weaponry and even bicycles and cars which needs to be appreciated here. Just like the facial animation and the work on the backgrounds, everything feels so real. The animators must have spent a lot of time into researching guns and general weaponry just to figure out they work to put them in here. Same for the bicycles and non cg cars. Plus, the Bonta-kun suits (which have their own small arc of appearance in Fumoffu in terms of seriousness) are adorable but are full of mechanical devices. Very much not to be underestimated by their outside appearance. That mixture and balance of cuteness and toughness from the Bonta-kun suits exemplify Fumoffu itself.

I don’t really need a last summary paragraph for this post, but I have a format so I have to do it anyway. Watch Fumoffu because it’s just a hilarious time for everyone involved. Whether you have seen all of Full Metal Panic! before, have only seen the first season, haven’t seen any of it, just watch it. It’s that light and heart felt comedy series with almost perfect characters, perfect jokes, and perfect bits of animation and art to illustrate the first two points. Fumoffu can be that bright spot on a day where you can see no bright spots. Solid rating here. No question about it. I just love Fumoffu so much. It’s the slice of life comedy series that opened the door to be watching other slice of life comedy series back in the day. Me and Full Metal Panic have a long history with each other.

For the past two years, talking about Fullmetal Panic is where I would usually call the review portion of Mecha March and the event itself to a close. I’m changing up things this year just like Fumoffu did for the franchise itself. I have a few more reviews still this month and one of them is sort of a tease for another event I’m hoping to do this year. You can look at my announcement post, see what series are left for me to cover, and you might have an idea. Thanks for following along with me, everyone. 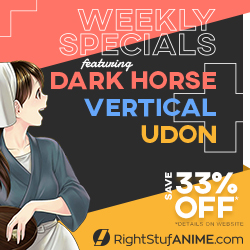