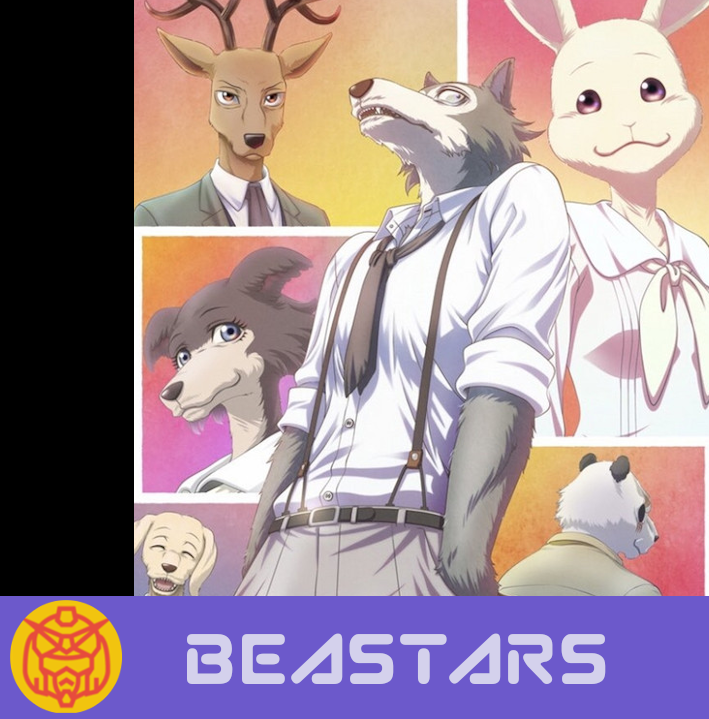 So hey, finally writing about Beastars after that fun collab with Irina. Oh yeah, I’m a crow by the way. Probably closer to a labrador in real life. Please look at our collab to how that crow thing came to be though. For this post, I was waiting for a reason. Kind of. You know, to come back with that “you remember how this series exist” sorts of context? I think a month of internet time is like 8 years in real time so, that checks out maybe. Totally not because I failed writing about it a couple times. Nope. In all seriousness, have you seen how 2020 is going so far? Doesn’t it feel like decades of things have happened already. My time dilation point is now proven. Anyway, it seems to be another week of Netflix like content with one series that isn’t. No one say yay. Netflix should simulcast like everyone else.

Beastars takes place at the prestigious school called Cherryton Academy and a little bit of the city around it. This is also a world where animals evolved to become human like in body structure while maintaining a lot of traits that makes the animals like them. So basically, each species has the ability to walk on two feet instead of four. A missed opportunity kind of. What would Beastars be like if they were just normal animals? Can’t animals just go to the school without being too human looking? I just wanted Ein from Cowboy Bebop to go there and rock it. In all seriousness, The school and world are separated by the usual Carnivore/Herbivore groups and the tension that comes from with that. You know, on top of usual teenage puberty stuff from this kind of story.

The show opens with the death of Tem, the alpaca and member of the drama club, by an unidentified carnivore. The poor guy was eaten alive on stage and almost nothing was left behind thus pushing tensions between carnivores and herbivories even more than usual. Still, things must go on like usual. Tem’s replacement is to be trained by the chad red deer Louis and protected by the quiet, unassuming stage lightings guy, Legoshi. (The Japanese don’t have L’s in their language so they use R’s instead.) You know, a shy and assuming grey wolf? Also, our protagonist? The meeting with Legoshi guarding the doors, the bullied bunny, for her sexual activities with men, is almost eaten by Legoshi. The drama.

I suppose there is some basic things going on with Beastars with an added bonus of the story bonus of herbivores and carnivores adding a lot of context to this anime. The story is about a love triangle between Louis the deer who wants to aim for the stars and become a Beastar (someone who has impact in how society moves), Legoshi the shy, unassuming wolf who is questioning his feelings towards Haru and life in general, and then sexually promiscuous rabbit, Haru. So yes, this anime is rated mature and uses a basic structure of other romance anime to do what it wants. The exploration of puberty and wants in characters in a unique way, animal instinct. Maybe I’ve watched too much anime because this all seems pretty normal to me. Utena and Star Driver must have skewed my perspectives a lot more then usual.

Let me just say this, using a basic structure to get what want to do. Especially since Beastars is comfy enough to stretch outside of that school environment too. You know, besides only seeing what one class looks like due to a filler episode. Even with the killing of Tem in the beginning, the school is a very neutral ground for them. In general, herbivores and carnivores seem to be living in a rough harmony. The food everyone eats is plant based after all. Then you can see the natural instincts happening in black market settings. Carnivores still want to eat herbivores in different ways. One was selling their fingers off for money and it was kind of scary. Some students pushed for “this isn’t school, I can do what I want”, while others didn’t stray from their ideals. This isn’t a world of black and white.

I also feel like saying a very controversial statement. Judging Beastars by the nature of race seems kind of simplistic to me because animals aren’t humans, so the racism is a little more complex then that. Even humanized animals aren’t humans. They are animals. Still, racism is there on some form because that’s one of the themes of the story. The show is not something like “Who Framed Roget Rabbit” where cartoons are treated like 1940’s entertainers in a real world; the underlying nature of the show really does hurt the show a little bit for those who are sensitive to it. I mean, technically Herbivores and Carnivores live equally right? Well, besides the black market of herbivore meats for carnivores that can’t let it go….yeah The nature of fighting or questioning one’s nature is a part of the show, so you can say that this might be necessary for the show. It’s still there though so you have to be somewhat comfortable with the subject matter to watch it.

Their natures are humanized in interesting ways too. Haru is a dwarf rabbit, right? What do they do? Mating, sex, making more rabbits. So yeah, she has sex with a lot of herbivore creatures which is why she’s bullied by other, jealous herbivores. It’s really easy to humanize Haru’s experience for searching for someone that loves her back. One of them being the very powerful and self-important Louis whose arc is breaking down his self-confidence and how it came to be. Also, he’s given a lot of limitations in this series. He isn’t the unbreakable super animal that he’s trying to be, there are many instances where he unassured or his body breaks down during some important moments. So Haru is his confort even if his feelings aren’t as strong here.

I think the most interesting character in this show is Legoshi himself. You know the shy wolf who hasn’t really had any strong sense of emotion or feeling until Haru entered his life. Of course, he did almost kill Haru when he lost himself and attacked Haru out of nowhere. So yes, even Legoshi is a wolf and finding someone like Haru brought in that side of him he didn’t know that he had. Here is the thing though. Is that love or is that the instinct that makes him want to kill her. Yeah. Once again, you are going to have to ditch those human feelings in this one completely because they are animals that walk around like humans. Yes, this is about puberty but animals go through that phase too. Every animal grows up and has instincts. Life is what it is.

On a visual level, there is some problematic things here too. Let me say this, Studio Orange’s cg is just amazing. Land of the Lustrous was absolutely stunning and Beastars is an upgrade from an already great product. The animals are animated in a fantastic way that makes them act like they can actually talk and move around and things. The facial animation and character animation is great. Sometimes a little too great though. Beastars has that problem of something like Area 88 has. The themes of the story vs how fetish like the animation is in stellar has. Area 88 is about war, but the planes are meticulously animated in a realistic fashion. Beastars is about feelings and finding yourself, but there are some very questionable scenes animated in ways that almost support them? That’s something you need to ask yourself though. Is it the animators fault for wanting to animate them that way because they are into what they are doing? Should they have pulled back? I’m ok with this myself, but you have to find your own truths.

So in general, I am going to give Beastars somewhere between a solid and a good. It’s like that problematic favorite show for me I think. A simple story told in a unique way with a unique point of view done well is worth a lot in these parts here. The problematic nature of the show and the animation in some moments do hold it back a little for me even if I enjoy it quite a bit here. I do think the show explores it’s characters and themes pretty well. The world in Beastars is a well crafted world that makes sense for the story it’s trying to tell too. There is a lot of artistry from the story in it’s manga on how the story was created and being told then to lovingly be brought to the little screen for us to enjoy it. I think that supports the anime a lot here too. If you know what you are in for are in the audience range of this show, definitely recommended.

Another recommendation: Read Lumi’s article on Beastars’ themes and racism. It’s something that influenced a lot of my opinions on the show itself. Add another great blogger to your blogging collection/subscriptions/thing!