This is another somewhat distant favorite of mine that I haven’t watched in a number of years. It’s also my third favorite anime that was directed by a certain Goro Taniguchi. The director behind bigger works like Planetes and Code Geass that pushed his fame further. Goro Taniguchi is one of a small amount of anime directors that I can’t help but watch whatever they create no matter the quality of the work. Goro seems to passing some ideas from one series to another, but he still has a large amount of imagination for what he wants to do with his series broadly and it always appeals to me on some level. It’s probably because he’s a sci fi and mecha person. I mean, that usually helps with appealing to things for me. I like those things a lot.

A lot of people I follow on twitter have compared the plot of GunXSword to Trigun. That is correct and incorrect at the same time in my eyes. Story wise, both are very similar. GunXSword features Van the Dawn (name always to be determined) and the young Wendy wandering around a sci fi desert from place to place in episodic adventures. That’s true. Thematically though, the two couldn’t be farther from each other. Trigun was about challenging the idols of peace through it’s protagonist. GunXSword is about revenge. Van and Wendy have been wronged by one man. A seemingly man with a claw for a hand who supposedly has dreams for a better tomorrow. There is some complexity to this journey, but it isn’t as into it’s themes as Trigun was in my eyes which is why Trigun is slightly better in my eyes? I mean come on, Trigun is just as underrated of a classic as GunXSword. We aren’t here to talk about Trigun though.

Visually and soundtrack wise, GunXSword rules. Listen to the opening above and you know what you are in for. It’s a combination of traditional japanese instruments with a jazzy rock style and solid trumpeting. (I feel like I am an expert in knowing good trumpeting considering I am a lousy play myself.) You can’t forget the music itself. The character designs are very Clamp/Code Geass like, but you can’t mistake the mecha anywhere else because of their pretty creative designs and play style. There is a lot of love for mecha and science fiction in this show because while you have the newer robots fighting each other, an older super robot shows with older pilots to pass down a legacy of bad ass robots and fighting. Something this show has in spades.

So yes, GunXSword is great. One of many underrated treasures that people need to know about. I really want to rewatch the series because it’s been years since I’ve watched it. That might happen sooner than later :O. It is a two cour mecha series that is just so fascinating and interesting. Since it is episodic, there are episodes that miss. There is also strange, sexual content that doesn’t fit the anime as well appearing at the end. Still, the show itself is really good and has much more hits then misses with a cast you can’t help but really like and understand.

Anyway, thank you so much for indulging me on these lesser efforts, but fun experimental posts. My review posts have been getting longer recently, so I needed something to cool off with that didn’t take as much time to write. Look out for future editions of these posts appearing here and there. One is definitely appearing next week. For series it might be, look at my anilist profile here. I should be advertising it more anyway. I’ve been pretty bad doing that on this site… 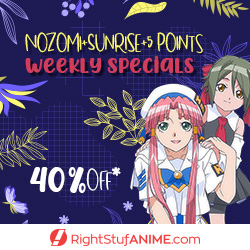