Not much to say here, end of season post is coming next week at some point.

Ah! A stand-alone episode that covers the opposite side of the memory eraser we’ve seen from Hatori and his former girlfriend (Kana). This episode’s story is about our protagonist’s homeroom teacher Mayu and her heart and affection for Hatori. I’m so glad that Mayu got an episode because she was so much more interesting than just a teacher who deals with Kyo’s crap all the time. She’s the over side of the coin who watched that relationship happen and then instantly come to a halt when Kanna lost her memory. That was the saddest sort of experience possible and Mayu having to deal with-it up-front mind crushing. Especially when Mayu has a crush on Hatori too. (Honestly, who doesn’t?)

Of course, Shigure had to insert himself into the mix too. He dated Mayu for a while because both of them were alone and even had a plot to get Hatori and Mayu together. Mostly because Mayu is working at her father’s bookshop in the summer and Shigure is just a regular there. That is the gap that Shigure used to get the two together again. Man, Shigure is such a troll. I just wonder if he’s moving against Akito so much because he can. Either way, great stand-alone episode showing Shigure’s prowess and troll capabilities. Hopefully happiness for both of them

I honestly don’t have much to say about this episode other then it being a massive recap from Rachel’s point of view and ruining the ambiguity on why Rachel did things. It did make me like why Rachel did everything she did more because Bam is such a non-character. Some of her opinions and thoughts were justified along with her doubting from the good side of her nature still being a part of her before the push. She was just a part of a few people’s plans though.

The push for going to the top with Rachel by Bam’s friends in his name. She was planted in a way which looked like they were attacked. Also, Bam was there to show he was going to get trained and come back for his own reasons. Whatever. When this comes back for another season, I will watch it. I just hope it doesn’t dig too much in the edgy side of anime. I can’t say that I’m the largest fan of edginess.

A very slowed down episode with its humor focused on the weird people that showed up for interviews, but it was also exciting to see Sento get some character development too. Even if it’s through her dressing sequence and the truth syndrome that she took before the interview. Her lack of being able to talk to people despite analyzing them and Kanie’s ego are somehow a perfect match for each other. I can kind of see why Sento has feelings for Kanie even if he is a massive superiority complex.

Can I just say how much I just loved the odd characters who showed up and then the normal people that showed up as well? The stab wound was not someone I was expecting or the normal girl out of the whole thing, but the political official, astronaut, and wrestler weren’t people that I were expecting to see. I do think this episode was a little slow, but I can’t help but really like it regardless. Amagi’s humor just works for me somehow. Even in the slower moments.

A simple, but wonderful episode. This time, finding a soldier planning to poison the Common Wealth. The way they do it, through residue on the soldier’s clothing. That of course leads to the girls working at the laundromat. Something that has its own twists and turns like how slow the girls do work due to equipment failures and lack of maintenance, the way the laundromat is losing money, and connections to the workers themselves. So what I am saying is that over the course of cleaning soldier’s clothes and finding the suspect that shows himself, they also improve the laundromat worker’s lives. That sounds productive to me. I love Ange’s persona because it’s so unlike her. Everyone else was great as well. 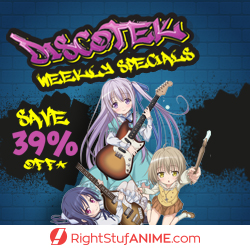