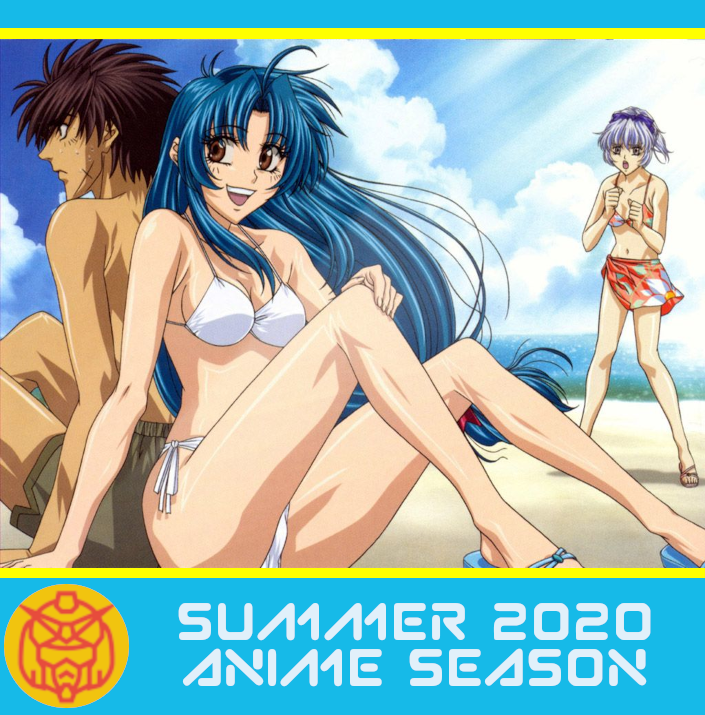 More seasonal premiers this week. Not a lot, but it feels like we are getting an actual season now. Maybe that has to do with the addition of some other shows I put in? Doesn’t matter to me I suppose. A lot of sequels came out this past week which a lot of people were interested in, but I’m just not one of them.

This show is very simple and easy in terms of writing so far, but the very fact that this show made me laugh and got me to love watching the first half despite not knowing much about these characters is a testament to how visual story telling can be great. I don’t remember their names, but I remember their personalities. The first half was beautiful. A classic anime bicycle chase vs a guy in a motorcycle. I loved every single second of it. Not only because we know how these characters act like our protagonist is powerful guy with a full heart, the girl he ran into is powerful, horny, but can read minds, and the guy on the side of the street is silent but strong. Having it well animated and well executed on top of everything was great.

The second half, the actual fighting and battle royale of the episode was a little slower, but just as exciting too. There is just something classic about strong high school students beating the heck out of each other. I will once again say that the writing and character personality profiles are lacking a bit, but it’s all enough for me to get invested in the characters that we all know a little bit about by seeing them in danger or seeing what they can do. There is also drama with our protagonist and the upper members of the tournament itself. That’s minimalistic, but I want to know about it. As long as this show keeps up the momentum or gives us more character material, I’m in. I hope it all stays in, because the animation will fail eventually.

This episode feels like another set up one. A lot of interest things happened in a short amount of time like Haru’s problems with Rin, Rin just being an angsty ass to Yuki for some reason, Yuki and Haru supporting each other in whatever way then can, Tohru’s problems with her family because her grandfather pulled his back and can’t make it to school, and of course a powerful, romantic moment between Kyo and Tohru at the end. It does flow pretty well and come to some very touching moments and even conclusions, but it’s still a set up episode for what is more to come. At least it is to me.

Oh wow, what an episode to start this show with. It does a lot of work in establishing the world, characters, and some bits of technology in a small package. The world is an almost Mad Max sort of post-apocalyptic world where humans were tracked down by creature called Gadoll and must work together to survive in mechanical cities. Deca-Dence is one of them. Early in her life, Natsume tagged a ride with her father for his geology journey and she ended up fatherless and with a robotic arm for the encounter. She wants to fight, but is pushed into the job of repairing the armor on Deca-Dence instead. She’s also a complete idiot that won’t let other people ignore her, which is how the cast is fleshed out.

I think this episode did bite off more than it can chew in some ways because the cast is too big and the world may be a little too extravagant to simply explain. Still, giving the character a job is a good way to establish that everyone must work to survive. Plus, I think the production team behind this anime knew all of this because some of the characters came with captions during their most bad ass moments. A major win here was the mechanical design. People have said that mechanical design is dead in some animator’s minds and even with CG, this show amongst some others display that isn’t necessarily true. Good first episode.

Yay, this is back. It’s been such a long time since this has last set foot in the land of anime and I missed it so much. It’s such a simple show, but the feelings behind it are real. This episode proves it. What is this episode but the love story behind how Hiroto met the Eve. The digital person he met when playing GBN for the first time. All of it is related to his gunpla unit the Earththree of course. It’s how his base unit and other units were named too. You can see this is why he also loved to play GBN as well. So of course, something bad happened to her in the form of the original Build Divers. It’s pretty interesting and there is a lot of soul in this series that wishes to remain there.

This episode was an alright set up episode for the season to come, but it felt like everything that happened was so bye numbers that it just was kind of boring for me. I know that things like Mary’s brother Victor to do his villain hi bye, Chris (the apartment manager) and Tetsuro being captured, Olivia calling, and such while Juzo (our gun headed protagonist) were out are supposed to be interesting things. They are. It’s just that there is something about how this show did all of them to make it less interesting. Oh, and a lot of still frames and check art work like usual. It does give the show a unique feel though. Maybe it’s just the fact that shows have done the same thing as this one before and this show isn’t doing anything exceptional or different besides the world building? Maybe I shouldn’t be too hard…

Here is a simple episode that revolves around Kyoto Animation’s character and facial animation in order to make it work. Kanie is sick at home and suffers from lack of attendance at school due to his job, so Sento and three cast members show up in a Kanie suit to go about his daily school life. Like I said, a pretty simple concept, but one that works because the way each character acts are juxtaposed onto Kanie to the point where it all feels weird and unusual like it should. Good, hand animator rest episode with simple concepts. Nothing amazing, but nothing bad either. This show is running out of steam?

Nothing much to write home about, just a character expansion and world building episode. Nikaido and Gaiman still have their fun dynamic with each other while they search for a way to get Gaiman’s head back from a crocodile to human. At the same time, killers Shin and Noi who have killed people, are hired by En to kill the two. We know how tall and strong Noi is now. This episode had a lot of possibly random moments that don’t mean anything to the story, but added to the world in small bits. Characters that were kidnapped or not, En turning people into mushrooms and eating them, and even an acupunturist out of random. That’s not even all of them. A fun episoe that probably sets up episode 3 and 4 pretty well.

A Chise episode with her adapting to western culture. This show seems to set in the early 1900’s somewhere, so I feel like the racism towards her was on point as far as I know? Englishman thinking they are on top of the world and looking down upon others like Chise from Japan. We also got to see some more of that school’s education alongside Chise so we are an outsider too. Very well done. I also like that Chise didn’t complete adapt to western culture immediately, but instead learned enough from a dueling level to beat the other guys in submission? That makes more sense. Along with the fact that Chise was a good enough distraction for the current mission to be a success.

Ok, this show is cute, ridiculous, and fun so far. I really like it a lot more than I thought I would. Chika and You’s quest to become school idols still continues with their attempt at recruiting Riko. Something that does happen towards the end of the episode where the two grasp hands over window distance. Riko does desire to sing, but instead starts her way with writing music instead. Plus, the scenes with the Chuni Kohane, and the adorable scenes with Ruby and her friend (I’m sorry, I forgot her name) are really good. The best scene was with the school president over loud speaker completely denying her Mu’s fandom love after showing it off for everyone. Very funny show so far.

This episode felt just as clunky as episode 1, but a lot of the main themes and comedy came to light as well. The reality of super robot anime are far more dire and drastic then one would expect. The first half features the recovery aspects of the Dai-Guard’s combat with the Heterodyne. Wounded people all the place and no doctors around to be scene. This is the reality of the combat of fighting them even if things would be worse if the Heterodyne won. Then the first half with the carriers taking the wounded to doctors led to the Heterodyne following them and the Dai-Guard meeting them again.

The serious first half was left behind by the much more comedic second half. Akagi, Momoe, and Aoyama got in the Dai-Guard that was refitted with a drill arm, people looked at scratches of the Dai-Guard to lessen the cost of it, and the Dai-Guard completely failed with it’s drill arm fighting the Heterodyne until it finally defeated it. I loved the dramatic pose the Dai-Guard was left in when it ran out of battery and everyone taking it as a hero pose. This show can be so fun when it wants to be. I’m waiting for the comedy and the seriousness to meet but for now I can live with this.

So, some uncomfortableness in this episode in the starting frame. Can I just say that there is not much really that funny about a senior boy that wants to beat up a high school freshman girl? You know, despite the situation making it funny? I’m very glad that Tamaki won because she is good and the moment she destroyed the senior’s ego with the attack towards the throat was amazingly funny, the rest of it was very uncomfortable and horrifying. I suppose that was the point. Still, I’m glad that Tamaki joined so she can protect them all.

The rest of the episode was hilarious though. I am finding more and more things to laugh at when it comes to this series when Ishida has to rely on the food from his students to get fed. I have so many questions on how he spends his money, but here we are. Tamaki beating him in kendo was great too and showed how far he’s fallen. All Tamaki this episode for me I suppose. I’m glad she found some happiness. The rest of the cast are fun in their own way. I just feel like she’s the most dynamic so far.