Alternative Caption: What is a Fuli Culi?

In my mind, I knew I was going to do this post eventually. Ever since completing and writing that Diebuster review a fair bit back, this show has been on my mind a lot. In fact, it’s still on my mind. I’ve watched this show at least six times for one reason or another and it’s always there in one way or another. In the back of my head, this is the post that I felt the most afraid to post about. You know, despite failing when talking about Evangelion twice now. I am not kidding when I say those posts are failures. No, this six-episode ova series is something else to talk about. On the outside at least. Jeez. I like my craziness, but I know that not everyone else does.

FLCL has a reputation of being the example of weirdness in anime. I have to admit that I really don’t like that reputation at all. For one thing, its narrative is very simple if you take away all the visual aspects of the show. Something that a certain amount of people can’t do so they dismiss it. Here is the secret behind FLCL, the art and animation are used to emphasize the moods of each moment. FLCL is about a boy growing up and the chaotic nature of the show is to emphasize all of that so the viewer can feel it. All of which includes some of the humor of it too. FLCL is surprisingly well thought out. There, a spoiler free review for those interested in checking it out.

To dig deeper into this show, FLCL is a show about a twelve-year-old boy named Naoto Nandaba. Naoto lives in the City of Mabase, has a brother playing baseball in the United States, and has a complicated relationship with his brother’s high school “girlfriend” Mamimi. Of course, there is nothing unusual about this city at all despite the fact there is a mysterious giant clothes iron in it for some reason. Of course, this all changes when a mysterious young woman riding a vespa literally runs into him causing the starts of FLCL’s story and the changes in Naoto for the better and for the worse. The fun and funny times begins.

Her name is Haruhara Haruko and she is the main propellant for everything going on in this story. Everything that happens, happens because of her. She is that change in Naoto’s life that she didn’t expect. Why she does everything is very unclear at first but makes a lot of sense later on considering that she only cares about getting what she wants to get. I mean, it’s incredibly clear that she isn’t a normal human by the things she can do and how her logic doesn’t connect with normal human logic. She hits things like a bat and it somehow works while also creating some crazy music noise. Plus, the Vespa is the strangest thing possible. She’s great.

Of course, Naoto goes through a wide variety of changes. The most notable ones come from his head or the NO Gate that Haruka opened by hitting him. Weird things, in an obvious representation for something also that boys start feeling at that age, pop out of his head for relevant reasons. Those are things that later become monsters of one type of another that Naoto riding(?) Canti, a robot with a tv head, and Haruka have to fight off in order to save the city. The other parts are about Naoto coming to terms with growing up. He does have a crush on Haruka and that pushes his relationships with others around quite a bit.

In the first episode, Naoto and his father already clash by the very appearance of Haruka at the house. All brought to you by a medium change from anime to moving manga art because FLCL can do that. All of which is another thing that is in FLCL, adult hood. There is a questionable level of adult characters in this series from the immature Naoto’s dad to his class president’s (who name is Eri) parents who have a complicated relationship. Basically, this show is telling the kids who hold themselves up higher than their local adults that they aren’t any different by throwing them into similar scenarios. Alright.

Of course, the second to last thing to discuss is Naoto escaping from his successful brother’s shadow. I mean, it’s pretty obvious that is one thing on his mind at all times. It doesn’t help that Mamimi is watching and flirting over Naoto virtually all the time. Either as a replacement or something else entirely. Same with, in a later episode, Naoto refusing to swing a baseball bat because of how good his brother is. It’s obvious that Naoto just doesn’t want that direct comparison to happen. Him finding his own reason to do things or swing the bat is how that arc supposedly ends.

So yeah. That’s a lot of things going on for a simple plot. What I mean by that is that FLCL central plot is the mysterious and wonderful Haruhara Haruko and Naoto with all the weird things coming out of his head versus the mysterious Medical Mechanica group. A villainous force that doesn’t have a body to talk about them, they just do things to do things. All of which is fine. For obvious reasons, them having a voice wouldn’t add anything but take away from everything going on. FLCL works well because of how hard it goes with character plots in realistic ways for six episodes. They just needed a central point.

I think it’s about time to add in all the crazy visuals again. FLCL barely has a consistent art style and has simple character and easily distinguishable character designs (very EVA like) and backgrounds that somehow keep the show anchored. Something that really helps considering that the show can go for Matrix 3D camera animation to manga animation to very cartoony and flowing animation in whatever way it wants too. Whatever FLCL does just looks great and is very much like what we would expect from Studio Trigger now. Gainax did need some help from Production I.G. to make this work though.

Here is a statement on the visuals being random, it’s very clear that it’s not. There is a brain behind the changes which dictates how chaotic a scene or even an episode should be based on what the mood is at that time or how important a scene is to the narrative in question. I feel like that’s what bounces off of people sometimes. More logical minded people will easily bounce off of something like FLCL while those who can look into the emotional side of things can find a lot to enjoy in this crazy show. In my mind, FLCL is a classic that has aged pretty well for the most part. Going to give this a solid on my little scale that doesn’t have a point honestly. 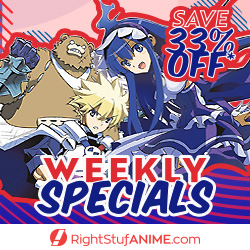