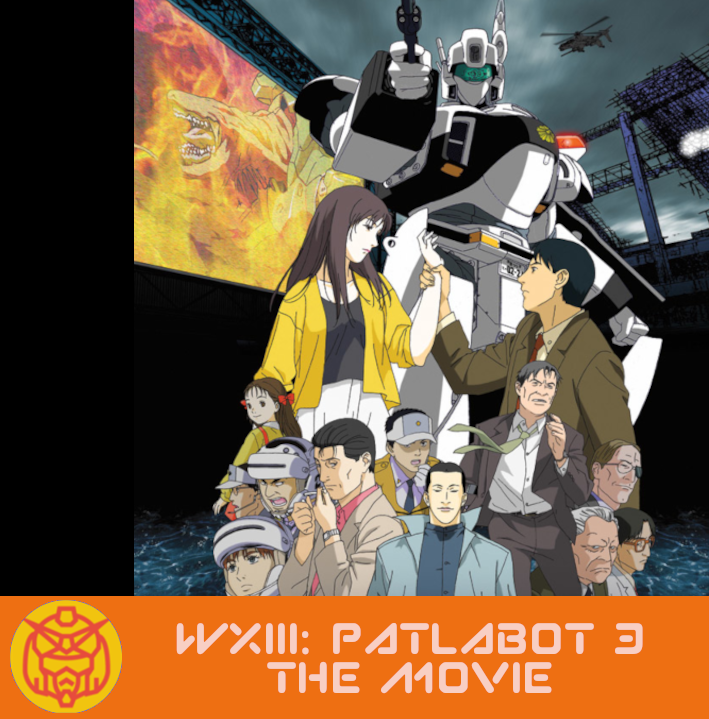 Once again, I am writing an anime review completely out of order. I think you all should realize I just do that after reviewing Char’s Counterattack before getting through the OG Gundam months after and not even touching the Zetas yet until next year. I’m a random person, what can I say? Plus, it keeps things interesting perhaps? That being said though, this film is very self-contained. It does take place in Mamoru Oshii’s small Patlabor universe and even have the SV-2 Cast show up in certain scenes and cameos. That’s all we get of them. We follow a new cast. Heck, this film wasn’t even made by Sunrise but by Madhouse at their height of glory. That should tell you a lot of things about this film.

For a long while, I was really nervous about watching this film. Mainly because the wider Patlabor loving community has said so many negative things against it. That made me feel like it was a waste of time. I haven’t given this film the time of day until recently and that’s honestly a mistake on my part. This film is an interesting watch that fits the tone and unusual-ness of the Patlabor universe. It’s part police and detective drama attached to a very monster movie sort of scenario which is pretty entertaining. So many turns and corners across the place in believable and characterized ways. I liked it a lot! That’s my spoiler free review. Let’s dive into the specifics.

WXII Patlabor 3 starts off with a massive incident that really propels the story. In Tokyo Bay, a major incident happens beyond human explanation. Multiple boat and labor (what mecha are called in this universe) accident from an unknown presence beyond explanation. In order to find out what it is, the older detective Takeshi Kasumi and his younger partner Shinichiro Hata are given the case to find out what is going on. They investigate ports where the ships come from, different genetic lab facilities, and discover something beyond imagination. A gigantic monster causing havoc. It needs to be dealt with to save Tokyo.

The chemistry between our two detectives is incredible because they sincerely bounce off of each other in huge, believable ways. Kasumi is a very experience detective that has good instincts, a lot of patience, and large collection of criminal and case records under his belt. He also has a limp which causes him untold amounts of trouble in extreme moments. On the other end is Hata, A younger and more hot-blooded detective. He’s not shonen main character hot blooded, until later, because he’s an adult. A younger adult, but an adult none the less. He has an excellent eye for details and has some fantastic computer skills. What one person fills out the missing critiques of the others.

The main story that Patlabor 3 is centered around is Hata’s growing relationship with the scientist, Saeko Misaki. It’s a very natural formed relationship and general starts after Hata meeting her in a parking lot after he was given his orders for the case and Misaki’s car wouldn’t start. So naturally, Hata drives her home and leaves it at that for the moment. Misaki teaches genetics in college and also helps with genetic research on the side so the two keep running into each other. Naturally, they find an interest in each other and start dating. It really helps that one can feel a natural chemistry between the two of them. As Misaki goes down the deep end for monster movie reasons, Hata goes with her for the most part with reservations.

I really like how this film is paced. It feels very natural because it’s very character focused. One-character interaction leads to another interaction which leads to another one all by character decisions and the pressing nature of the situations happening. There isn’t a lot of monsters on screen, but that’s fine considering that this isn’t godzilla. You don’t know what the monster looks like and are probably here because it’s Patlabor and want some human drama, police work, and mecha. Three things that Patlabor 3 succeeds at mostly in very realistic and naturally escalating ways. Just not with the usual cast. When the monster shows up, there is no way you can miss it. It’s big, large, and in charge.

There are some weaknesses in the story that need to be addressed though. Being a monster movie isn’t one of them, because giant monsters have canonically existed in both Patlabor universes. Instead, we can talk about the usual Patlabor cast of characters in SV-2 only being there for cameo appearances in the middle and in the end when mecha action is needed. That last ten minutes feels like a completely different film. All of which means there isn’t as much mecha action in Patlabor until the necessary robot vs giant monster thing in the end. The real moments of drama are smaller ones in between this movie’s cast somewhere else. Something that the camera likes cutting in between because of Patlabor film requisites. I like this film, but it would be nice if it could be titled something else to not have issues.

That being said, this movie is gorgeous in every sense of the word. It doesn’t have Mamoru Oshii’s specific directing style behind it, but it looks like something in Mamoru Oshii’s Patlabor verse from ten years before. Each character looks like a stylized, grounded Japanese person which is cool. They each wear their own professional clothing and look very distinct from each other. A lot of work went into this film to make sure this film’s backgrounds look like previous Patlabor media which must have taken a lot of work given the difference of studios and the year gap. Of course, Headgear is behind this one too so I suppose that production materials where there. Either way, this show moves good and just looks good with some very dynamic shots and story boards through out.

The things that are holding it back are the attachments to Patlabor itself and some adult material. I’ve already talked about that first part, but this film is rated R. It’s only rated like that for very brief scenes though. In general, it’s very easy to watch and well produced film that I really like. It’s very adult and mature in how it’s executed, has a very fun and well executed monster story, has a cast of likeable and wonderful adults that live their own lives, have their own ideals, and such. I do feel like it has held back slightly by petty things like this being a Patlabor thing without much patlabor. So bad titling. I don’t think that Patlabor is a good canvas for every story that Headgar thinks of. There is a limit. So in essence, this is a Good. Maybe not a good jumping in point for the franchise, but definitely watch this one.