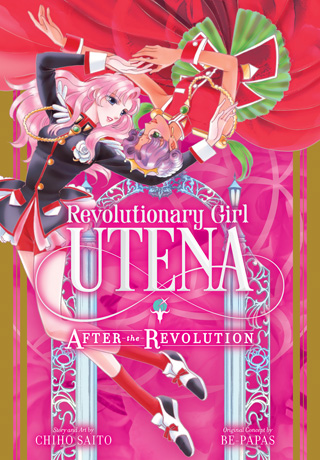 One question for everyone, how do you follow up the finale of something? You know, like something crazy like Revolutionary Girl Utena. An ending defined by the strongest character plots possible and is infamous? The first answer I have is that you can’t. One could say that even touching anything after a finale can ruin it all by destroying the text behind it. The second answer is changing the story itself in the form of a movie and creating another ending with a different context. The last answer is focusing on the side characters from a story and seeing how their lives have changed after the finale of the anime. Revolutionary Girl Utena: After the Revolution tries to do the third option but doesn’t add anything to Utena at all.

Revolutionary Girl Utena: After the Revolution takes place twenty years after the manga or anime Revolutionary Girl Utena. I’m not sure which one this manga takes place in. I haven’t read the manga, so I have no idea how different they are. It’s split into three chapters where each one focuses on a different group of people 20 years after they left Ohtori Academy. I mean, this was supposedly made as a 20 year anniversary project to Utena so it happens. Saonji and Touga are the focus for chapter one, Juri is the focus for chapter two, and Makie and his sister Kozue are the focus for chapter three. Saonji and Touga are auctioneers, Juri is a world class fencer, and Makie is a pianist.

I do think that this manga is a good concept because it doesn’t mess with the finale of the story with the main characters at all. A very good way to do it and think about. The problem is how each story is written. Each one is more like a recap of the Utena from their perspective and memories than anything else. Well, Juri’s arc has a point but still. All of this shows that none of the characters have changed since they left Ohtori Academy despite their career options because of this. I know the school they went to was no normal school and such, but they were all young teens and twenty years have passed. They have had more experience after Ohtori Academy then before it so there is so many ways to take that. This feels too cheap and easy.

Look, I know that no one is asking my opinion about this but you are reading this, right? I have an idea on how it could be done better. All I would do is just have this be a Student Council reunion of some sort. Three chapters would be enough to do that. Have the characters meet, talk about where they have been since they have all seperated, and then that’s it. Instead, they had each character show up at the Academy causing a flash back to Utena storylines and the mystical figure of Utena show up that no one seems to remember for some reason. I mean, they have something for that. It’s called Revolutionary Girl Utena. Once again, I can’t help but wonder why I asked to review this manga. It’s just kind of a thing that exists with no value to it. At least the art looks good.

If you are still interested in checking out this manga, it’s available on October 6th, 2020 from Viz Media