I think you guys know a lot my tastes in media from my posts, right? For instance, Full Metal Panic. For the past few years, Mecha March has featured a review of a Full Metal Panic season. I have a tab under anime reviews that says Mecha March where you can find those. Or you can click this link. Full Metal Panic is a series that I’ve loved for a very long time and it’s another one that just can’t help but love no matter what. Imagine my surprise four years ago when a show adapted from the writer of Full Metal Panic, Shoji Gatoh, other works came into existence. I do realize that Cop Craft come out last year and I will get to it eventually. In that time forever ago, Amagi Brilliant Park was simulcasting and I was just too scared to watch it for some reason. Now I have and it’s time to explore some of the craziness.

Amagi Brilliant Park is centered on a theme park called, very surprisingly, Amagi Brilliant Park. I’m sure that is completely shocking for everyone reading this. The anime starts with an attractive and mysterious girl named Isuzu Sento holding the lonely and gifted child star, Seiya Kanie, at gun point to look at the park or else suffer lots and lots of pain. So instantly, the FMP comedy makes an appearance. What Sento shows Kanie is one disappointment after another. The old grand entrance to the park is a love hotel now, the cast is rather unenthusiastic and bad, the park has tons of working and safety problems, a lot of rides suck, and the attendance is low. Like, startlingly low. That’s the main issue for the show’s plot.

The hidden secret behind Amagi Brilliant Park is how fantastic it is underneath the scenes. Like seriously, almost all cast members are from a fantasy land called Maple Land. A very basic, but very fun name for sure. Princess Latifah is the general manager of the park and is a princess from that place. All of the other cast members are some creature from that society. Moffle and his friends look like people wearing mascots, but are just fantasy furry creatures. That’s just an example. The main idea for all of this is a curse placed on Latifah from an evil lizard. If the park doesn’t receive 500,000 attendees in three years, the park is doomed, Latifah loses her memories, and everything goes to hell. That time is months away.

Kanie is picked by Latifah, out of a faint memory, to be the acting manager of the park. A role that he completely turns down at first because he doesn’t believe any of this. I mean, he was forcibly taken to the park at gun point by a certain Sento, so I can’t blame him for not even wanting to be at the crappy theme park in the first place. With the appearance of his own magical powers and needing a goal in his life from fading away into the dark, Kanie does accept the job as acting manager until a deadline is passed with Sento as his secretary to save the day on a fantastical level and the normal level for everyone. His child star ego really plays into all of this as well. It’s a lot of fun.

This show is something else. I mean that in a good way mostly. For instance, Shoji Gatoh seems to be a master at blending genres together. How about a fairy tale and a theme park rags to riches story combined together? Where else have you heard something like that? I feel like that was part of appeal of this story for me because it can work so well to provide you an atmosphere that can only belong in one place. Amagi Brilliant Park is a wonderful place with so many unique characters and creatures from all walks of life. There is a hominess of the environment is unnaturally strong. Besides the stranger Kanie, every person has a connection to each other. The fact that Kanie gets invited into the family permanently in the end means everything because he saved everyone. That’s a spoiler, but do you expect that not to happen? Why would a story like this end in sadness?

From the size, the many unique cast members at the park, and the fantasy come many fun and creative episodes that develop the park even further. A swimming pool play becomes something more spectacular then an audience would expect when pirates from another fantasy world appear. A dungeon episode is far more creative when you realize that it’s just a game and a lot of the cast members from that area are just really shy. Even the dragon. Not to mention the antics with the idols of Amagi Brilliant Park who get their own episode, when Kanie and Sento hired new cast members from all walks of life to work at the park, or even just the park operating itself. The park is such a wonderful character in its own right that grows and develops. I love the character of this episode so much.

I do have to mention the obvious stand out characters of the show, Kanie Seiya and Izusu Sento. Kanie has a simple arc, but it’s one that carries a lot of weight with it. An arc of learning to love working with the cast of Amagi Brilliant Park. It’s an important one considering that the fate of the park surviving is on his shoulders. He always takes it seriously, but it’s always been a job for him until the end where all he does saves Latifah’s memories. Sento is another fun character with a small, but understandable arc of her own. Discovering herself worth after pointing guns at people through the whole show and seeing why that could be wrong. She’s a wonderfully efficient secretary that can always be counted on.

This show’s humor is good for the most part. There are some things about three, young boys abusing Izusu that I don’t like and irritated me through the whole show. Other than that, it’s pretty fun. In some ways, you could call Amagi Brilliant Park a Full Metal Panic Fumoffu Season 2 with a lot of twists. It’s Shoji Gatoh’s characters and writing combined with Kyoto Animation facial animation, art design, and production values. If you’ve read my Fumoffu post from forever ago, that’s a match that is just meant to exist. Good comedic timing, fun jokes here and there. One episode relied on facial animation and body language the work and it did. This is another show that pushed some of Kyoto’s Animation’s production bits to the limits. Well, maybe not considering that Violet Evergarden exists. Still, no complaints here.

I do have some minor complaints for everything. You know, besides the one I mentioned already. The first one is a nitpick. Considering the amount of characters in the show and how long the show is, 13 episodes, not everyone can get as much attention as they deserve. That’s ok considering that this show somehow worked and clicked together in a fantastic way. The other one is that the show loses steam around the half way point and I don’t think it fully recovers from it. The first half is all go go go with energetic jokes and the second half moves well so not everything lands as well as it could. That hurts it a little bit in my eyes. Still, this show is good. Like, I was expecting it to be good but not in the ways that came out. It’s a big surprise that you will never see coming if you check it out. I tried not to spoil everything. 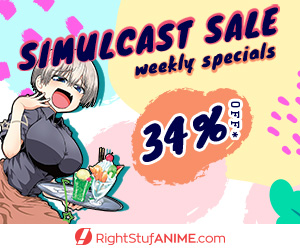