This year was a year for large amount of self-realization. Not just from being locked home in 2020 and having extra time, but in what I’ve watched and enjoyed. I’ve noticed this continuous trend in myself that I am not seeking something with a perfect beginning, middle, and end anymore. I’ve come to realize that I like ambitious projects that could have messy or unfinished endings to them. Anime series that break away from the norms of a lot of series and are passion projects from yet another kind of idol series, isekai series, shonen jump series, or just light novel series that I can’t stand the writing of at all. Must be from wtching gainax all the time. Even if those projects don’t make it all of the way out of the end, they are still more appealing for me. That is the thought process on how this list was put together.

Some quick notes, this isn’t a ranked list at all. They are just five shows that I enjoyed more than other shows without each one being better than the others in my mind. That’s just it for now. More notes later on.

New Series I Liked A lot:

I haven’t written anything about this show for a while and haven’t written a complete review yet, but Dorohedoro is really great. Like, one of the best anime series that appeared this year. Not just because of Noi, though she helped greatly. It does so much interesting things in a short amount of time. Interesting plot regarding sorcerors, tons of crazy things including how magic works, the chaotic nature of events continually going on in this world and such. It’s all good times.

What a fun, visual feast with a lot of meaningful behind it. A great science fiction wonder land with a lot of great things. A very minimal characterization for some people where we don’t even know the character’s main names during their crimes, but I think that’s what makes them more memorable. A lot of the work was to put into making the crimes occur in the first half and the wonderful construction of the world and itself in the second half was deconstructing the Akudama and society itself away from the Akudama and I think that worked for me. All tied together with the wonderful visuals and crazy battle scenes. I think this is the most beautiful looking anime of 2020.

Another pretty crazy and just really cool anime from this year. One where the world locked humans into a video game while bots are deciding the course of humanity. Well, except one down when a down trodden one watched a girl named Natsume break out of her station. Then the real fun begins. Lots of great visual design, good action, and some very meaningful things as well.

Keep your Hands Off Eizouken

Three girls make a club that creates anime. What more do you need then that? Yet the complexity comes from the process of creating anime, the passion people have for creating anime, and good commentary on the industry itself. All with very fun characters full of personality and spunk too.

This one is a little harder to explain. An ambitious anime that look a criminal’s mind by having “detectives” solve cases by diving into criminal minds through technology and find their personality patterns then capturing the criminal in real life with cops.There are some obvious things like who the lead criminal is and such, but I like how all these pieces somehow made it together in the end. Not a lot of series can do that.

Yeah, those are them. Probably bad takes, but what can you do? With that come a number of the sequels or attachments to other franchises that I enjoyed this year as well. Lets look at them.

These aren’t ranked either, because I don’t want to do that. They are just good things.

Fate isekai in another world with good monster fights, cool and sexy servants once again, and a lot of really good fight scenes. Very incredible anime.

More Fruits Basket which is great, but everyone is growing so well. Tohru is growing, Yuki is finding his own feet, and Kyo and Tohru’s relationship is getting really good. Also, the stakes are growing, the Sohma family secret is slowly being revealed, and Akhito as the head of the Sohma family is becoming a jealous meanace. Lots of things in a season like this and it’s incredible.

A very good spin off on Madoka Magic with a lot of fun characters, good visuals and animation, and plays on the concept of witches very well. Especially with so many complicated things and how a magical girl can take the witch powers and use it in their own ways. Plus, memories. Lots and lots of memories.

Yeah, those are the sequels and installments. I enjoyed all of them quite a bit and everything else like that too. All of them are just exceptional to me and I am glad that they exist.

Since this is the last part of this list, runners up to the first list. Once again these aren’t ranked either. They are only not ranked besides not making it to the top. That’s it really. Have fun!

Yup, that’s it. I don’t feel like going into detail for these.

And that is the anime from 2020 that I enjoyed the most. I still have some other year end lists to work on like older anime series that I enjoyed in 2020 and anime movies that I enjoyed watching in 2020 as well. Keep an eye out for those sometime in the future. For now, let’s look forward to what is to come in this next season and the next year as a whole. 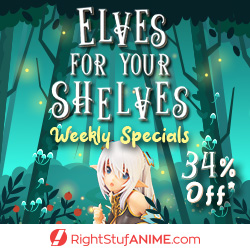