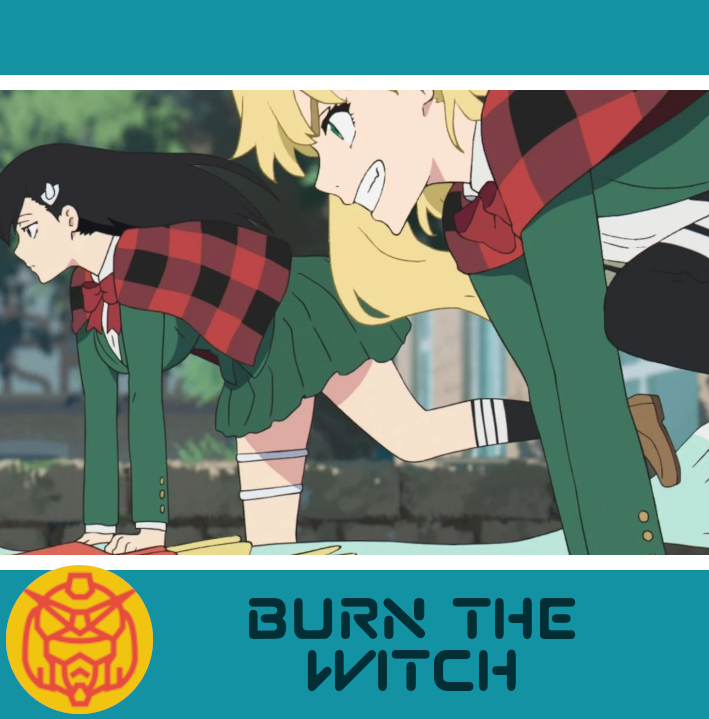 I used to be a big Bleach fan back in the day. This should be a well-known fact if you’ve followed me for long enough, but I still need to say this for newer viewers. Mobile Suit Gundam was the series which got me to be intrigued in anime originally, but there was a three-year gap between elementary school and high school, which used to be called junior high, that I didn’t watch any. Yeah, I’m not sure why. Bleach being the talk of the town high school was what got me into watching anime for real and I’ve been an anime fan ever since. I do not think that all of Bleach is good, but Tite Kubo has garnered my attention enough to pay attention to his future projects. His most recently one, besides the characters designs for the latest Sakura Wars content, is Burn the Witch.

Burn the witch is a short series that supposedly takes place in the Bleach universe in a location called Reverse London. A place hidden away from the Front London, otherwise known as normal London, and contains mythical creatures called dragons. Dragons that killed most of London in medieval times, but now are kept under the watch of a group called Wing Bind. A very thematically relevant name for sure. Some dragons are good and can live in peace while there are others who cause havoc and need to be dealt with one way or another to protect the citizens of Front London from dangers they can’t see. The two characters we follow are Noel Niihashi and Ninny Spangcole, who work under the unit named Piper. One that does not feature going on the offensive, but dealing with dragons in indirect ways.

It’s very interesting that I decided to review Burn the Witch after Dirty Pair because Noel and Ninny are essentially like a modern version of the Lovely Angels. Not only does that destroy the myth or appeal of witches and dragons, but it normalizes magic and spells by making them ordinary and routine. At least to us. Noel and Ninny are hired out as contract workers for different jobs and are one singular group. Noel is the soft-spoken bad ass one who is always on time and Ninny is the very loud one who makes it to missions last minute. Noel is a student in Front London while Ninny works hard as a famous pop star, so they both are busy and live double lives somehow. They still wish to break out of piper and into Sabre, a more advanced one day, which is a main focus of this story.

I say a main focus, Burn the Witch is short story with lots of ideas in it that feel like they have the same importance. The overall arc is dealing with them wanted to be promoted fact in the beginning because it’s a want, but it’s not later. The manga is hard to follow because it jumps from one idea to the next from panel to panel without warning. At least the anime form is a bit easier to follow because the creators have to slow down and animate moments giving them time to breathe a bit. The girls live at home with a normal guy named Balgo who is way too interested in Noel, but also can see and attract dragons. Though, there are hints that he may be more then we see in the story through some small bits of power or abilities here and there. Maybe later. For now, he is a major waste of screen time.

There is too much going on to say that there is a full arc, but the manga and anime of Burn the Witch end with Noel and Ninny fighting together for the life of an elder dragon from a person in Sabre, Bruno Bangnyfe. That has to be a Tomino name. Ninny’s former co star, Macy in terms of singing, has been possessed by a dragon for a while called Cinderella. A dragon was small like a pet until it asked her to do more and more destructive and deadly things in Reverse London that effect how things are in Front London. So Bruno from Sabre was asked to fight with the problem and the girls work against him to save Macy in a human way. Now they have two, Balgo and Macy, living in their apartment. Are you confused yet? I know I am.

All of which is a shame because the world presented in Burn the Witch is so interesting and unique. Far more interesting than what Harry Potter did, which is good. A lively world of London that has fantasy creatures living in it and magic all over the place, what isn’t cool about that? Same with Ninny and Noel. Both of them are great characters and somehow make a mess of a thing watchable (not readable). They have a great dynamic with each other that you can build off of each other in relatable and wonderful ways, and the way they spells says so much about them too. How they fly around is great too. The spells are like Bleach’s hadou spells which I really like because having numbered spells is unique to bleach alone and it’s so cool and a way to make everything feel realistic and mundane.

The anime looks amazing. It takes a lot of what the manga through at it and actually built a living and breathing world out of pages that didn’t move that much in a world. It’s incredible how quality animation and backgrounds can do that and Burn the Witch did. The dragon’s designs are amazing and unique, they move so cool, and they feel dangerous. Also, the characters designs are incredible like all of Tite Kubo’s designs in Bleach and other places he has worked on. The clothing Ninny and Noel wear suit their character designs and tell you so much about them without them saying anything. Similar to everything else Tite Kubo has created. The background details of the world, the art, and animation are the key selling point of Burn the Witch to me. That is why it’s only an ok for me honestly. It misses a lot of marks in becoming actually good or completely interesting.