I told you guys I would write a post about Dirty Pair in January. Surprise, it happened. Yay, I kept a promise. Dirty Pair December was a whole lot of fun and I’m glad that I enjoyed an older series that I haven’t checked out beforehand over a month. It was one of a few reasons I survived finals week besides taking some work off to have some more time to relax. I should start a tradition from this point forward. What tradition? Will, finding an older series that I have never watched before and do a similar thing for December just for fun. I think that there is a lot of value in just going through a shorter series insistently like that sometimes. Especially when it’s something you’ve never watched before because it reminds you, as an anime fan, that something can surprise you. Anyway, I should probably talk about Dirty Pair…

Dirty Pair is a science fiction anime set into the far future. A future where humanity has spread out to the stars to the point were traveling faster than light is a mundane thing. In that world, police enforcement is nearly impossible, which is why organizations like 3WA exists. 3WA stands for Worlds Welfare Works Association and its a for profit help organization for people across many planets. Just like now, people are not going to do good deeds without payment in some way it seems. Very realistic considering the number of governments that can exist in space. An organization that can go anywhere without restrictions would be greatly beneficial in some way. It must be a hard job though.

Anyway, Dirty Pair is a show that centers a few of the many daily adventures of the Lovely Angels Kei and Yuri who are known infamously as the Dirty Pair. Two hot girls that are excellent partners because they balance each other out. Kei is an attractive red headed, poofy haired bomb shell who is a good action girl that jumps into any challenge without thinking about it and has a lot of skill. She is a big tom and the front-line fighter of the group. Yuri is the long, black haired bomb shell who is the brains behind the Dirty Pair. She can do action things too, but not as well, and is the one who thinks of plans when the two are in trouble. Yuri is also the more girly girl who likes being clean. The two get in a lot of arguments with each other, but they like being each other’s partner. Two very good girls.

The premise behind Dirty Pair is it being an episodic space adventure show. Every week, the girls are involved in a different case in a different part of space. One case could be chasing a cat across a city and causing chaos throughout said city without even realizing on a planet that is who knows where. Other cases involve a petty feud between a father who owns a company and his son who doesn’t want to marry the father’s choice. There is also a space liner closed in case to stop the bomb before the passengers all die, classic cowboy episode, a crime capper, a family feud through a space liner hostage situation, and so many more things. There are only a small number of recurring characters, like director Gooley, but one episode doesn’t usually carry over unto the next one. It is a good show to watch for the entertainment. Especially when everything blows up in the end, which happens all the time. Not every story is that well executed though, but that is the nature of being an episodic show.

There is a good casualness to how this anime goes about its setting and its stories that makes it feel so homey. Dirty Pair isn’t a series where it explains the particulars of the world to the audience in a complex or mathematical level like how the Minovsky particles work in gundam or something. Instead, the world comes from how Kei and Yuri use technology and live out their lives. Can you imagine a time in the future where a space ship can just be rented like it’s nothing? What about just going to another planet either for work or shopping onto the way to another planet. Not to mention how having a laser knife salesman that goes door to door. This is a casual future that looks like the 1980’s but in space.

There is a bit of an existential crisis to how the Lovely Pair lives in Dirty Pair too. This comes with the nature of their job. Kei and Yuri constantly are asking for vacation and while that may seem catty at first, but we see some instances of how their job affects them. These girls are busy all the time traveling across the galaxy and solving problems to have any semblance of a normal life or date guys they like. One week they will be in one planet fighting against a terrorist force and another, fighting a virus that can lower an IQ controlled by a super smart rat, to a giant space ship that comes out of nowhere to kill them which doesn’t bother them at all. Same with living in an era where space horror can just happen casually? This is a thing that is lowkey there in the series, but it provides a more interesting stretch of content to watch to see all these things happen to them.

Let’s talk about fanservice a bit because I think that needs to be addressed at least a little. It isn’t that bad at all. In fact, the fanservice is the kind of fanservice which characterizes them. First of all, none of it is all that bad or that titillating, besides one moment in the final episode, because honestly unless it’s self-intentional. The camera isn’t super leery at all. Why the skimpy outfits? Why not. The girls are in their late teens, so they are going to be a little horny after all. Kei and Yuri go after the hottest hunks in front of them. It’s fitting. Same with how they dress or treat the clothes to show their personalities. For instance, it is shown that Yuri sleeps naked because she walks around the apartment wearing a sheet. Similar thing to when Kei and Yuri are taking a bath in a different part of town and Kei has all of her clothes scattered in front of their bath while Yuri has them folded up. There are small touches of personality like that which show their differences. Plus, is anyone going to complain about two hot and flirty girls with guns destroying problems in space? I think not.

With all that together, I think that Dirty Pair is a good series. Very fun and entertaining with some good characters in space. Lots of good action in tons of varieties. Space ships, horse, gun shows, slapping, going through sewers, and things like that. That’s the kind of show it is. Despite all its settings and varieties, it’s not an ambitious show at all. Very surface level and that is fine. More than fine. It is just fun to watch these two hot girls do what they do every day and suffer some kind of consequences in the end. Or not. Doesn’t matter really. That’s why I can say that it is a much watch if you are a fan of 1980’s anime or anime in general, because this show looks great for its age. Still a good though, because it influenced other shows moving forward that are much better. I keep thinking about how Cowboy Bebop probably wouldn’t exist without Dirty Pair coming into prominence in the 80’s for instance and I mean that. This series is usually available for cheap on Rightstuf because it’s on sale all the time. Watch it if you get the chance. 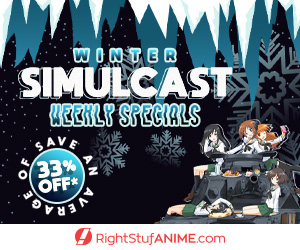