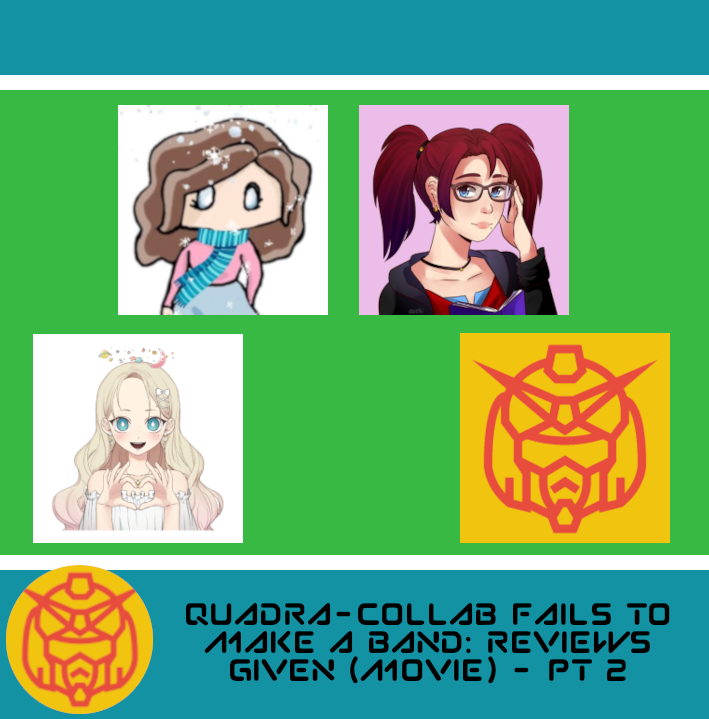 This is the second part of collab review between Irina, Karandi, Shoujo, and I. You can find part one on Irina’s blog right here: Link

So here is a key to help with reading this collab on my blog:

This is because not all readers show color, so hopefully having four text styles will make the differentiation a little easier.

I: So as you can see, we all really liked the series and went inn to the movie full of … anticipation!

I: The thing about the movie is that it’s as much as falling in love story as it is a getting over love story. I suppose it was the same for Mafuyu but things are a bit more complicated when you’re still living with the guy.

I: And as much as I like Kaji and Ugetsu as characters, I do not like them together. Their relationship has always felt so claustrophobic. I suppose that is the point but it’s one of the reasons this arc didn’t work as much for me.

I: However, I do really love seeing a romance that ends badly but where there is no bad guy. That’s something anime doesn’t explore that much. Ugetsu and Kaji both have their faults but neither was to blame for the breakdown of the relationship. And they both still love each other a lot on some level. That always makes it harder. It’s a good dynamic. A relationship can be unhealthy and make you miserable even when the other person is great. We don’t see that much.

K: You are absolutely right, Irina. We really don’t see relationships like this very much where it is ending and there isn’t really anyone at fault nor is there one perfectly innocent victim who we are supposed to feel sorry for. The situation kind of sucks but we’re seeing them dealing with it (in not always constructive ways) and yet this movie didn’t want to wallow in misery. It definitely wanted to move us toward hope by the end and honestly I think it did it spectacularly.

K: Much like the series did, the movie takes relationship issues head on and doesn’t try to sweep the complexities under the rug. It isn’t always easy to watch but there’s a really solid emotional connection that the viewer can build toward these characters while watching their struggles. It is kind of cathartic and I will definitely admit I genuinely cheered at the end.

S: What about me about Ugetsu and Kaji’s relationship was just how adult it was. It really was that these people had some strong feelings that are so complicated in some ways. Not a lot of series would go in as deep as this one does. I think the apartment that Ugetsu has kind of shows how wrong and claustrophobic his relationship with Kaji was.

S: It’s not just as stale and color blind as it was, but how sound doesn’t penetrate it. That apartment is a whole bunch of nothing and it can only focus on those two in the wrong relationship that it was. It really is adult and not that school relationship between Mafuyu and Ueno. Especially with Kaji sleeping around with whoever and trying to remove that tension from himself and he just can’t do it. Just a number of wrong choices all over the place.

SJ: I think the relationship between Kaji and Ugetsu carried over a lot of themes from the original anime—that is to say, as Karandi mentioned, it tackled complicated relationship dynamics head on and didn’t shy away from portraying their problematic, darker aspects. I think many of us can relate to holding onto something (be it a relationship or something else) out of fear of the unknown “after.” Even knowing that what we’re living isn’t healthy or good, we’re too terrified to break away from something that, even as it pains us, proves comfortable…familiar. I saw a lot of my younger self in their relationship, and because it was relatable, it hurt me. (In the best way, I might add.)

SJ: In the end, they’re both so scared. Ugetsu crying—almost caving and calling Kaji back—was one of the most emotional scenes for me. If Ugetsu had called, I have no doubt that Kaji would have been tempted to return. I don’t know what he would have ultimately done, but I’m so glad that Ugetsu had Mafuyu’s gentle encouragement to hold to when it seemed like everything was falling apart. In reality, that moment of pain was the beginning of things falling together, for both of them.

I: I did really enjoy the glimpses we got of Mafuyu. He seems so much better and you can tell how far he’s come in his personal life. I actually would have loved to see a bit more of Ueno as well. Just to catch up with them.

K: Definitely not just you. That staircase was a series character in its own right and if I was going to fault the movie for anything it would be its extended absence (then again the staircase is intrinsically linked to Ueno and Mafuyu so it kind of makes sense that with the focus shifting to the other characters we kind of lose opportunities for staircase encounters).

Thanks so much for reading, everyone. Be sure to read part 3 when it comes out on Shoujo’s blog in ten minutes here: Link and part 4 after that on Karandi’s blog here: Link. Thanks for reading!