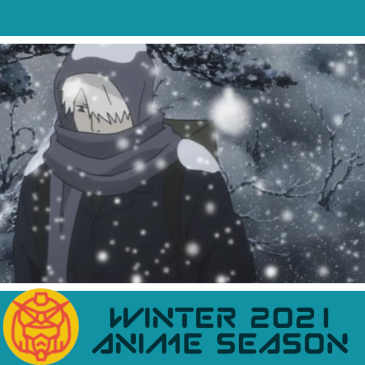 A relaxing week with some time off to think and consider work that I will do in the future. I kind of enjoy weeks like that. Also, snow. I built some snow people and played with the dog in the snow. She was so confused by what snow is and its mean, but also kind of adorable at the same time. In terms of anime, some cracks are starting to show while others are showing their strengths. I like to see all of that.

The main thing that is getting to me though is I am really starting to not like Attack on Titan Season 4. It’s still good, but the last two episodes have been so “meh” for me in a lot of ways. I explained last time my thoughts on episode 9 of this season, but this week focuses on episode 10.

I’ve been trying to think about what to write about this episode for a little while and I think this episode was one that needed to be there. It challenges a lot of the reasons why this show is still going forward. Why are the girls fighting monsters from suicidal girls to save their charges from their perpetual suicide? Why is Ai continuing on her journey of saving Koito while Koito may or may not had a thing for Sawaki, Ai’s teacher? Why do each of these girls do what they do? After seeing how Neiru fights like an action hero, we see this when the girls hang out.

I really like how each girl has their own sense of fight style and agency and their own personalities that click better then intended. Especially with Rika being the one person in the group to challenge boundaries and pushing ideas that no one else will. I think she is the one who sees possibilities that others just don’t want to think about. Plus, there were some cool moments when the girls bowled and used the arcade that was available for them. I’m interested in seeing where the narrative beats of this episode go from here onward. I think this is yet another favorite episode for me.

Election day! An election where no one is really the bad guy. Well, except Shiroe who opened up the transportation gate effectively ruining Ein’s backer from the senate of the people of the land. Still, Ein narrowly loss anyway (plus got access to some powerful things as a gift) from Rayneshia and her brand new round table centered on adventurers and people of the land. Plus, she’s really cute about her crush on Crusty still. I’m glad the Silver Swords are back into the round table. I missed them. My thoughts are jumbled, but it’s a good episode and a very important one for the relationship of Akiba going forward.

Today’s episode shows how nice people can be in this world and how the girls still lack experience camping in terms of temperature and things like that. Ena, Aki, and Aoi make their camp ground and notice that the temperature is too cold for them at 4:30 pm after some nice times. The drama gets worse as they girls notice they are too unequiped for the temperature and fail to acquire goods. Luckily, Rin lets the teacher know and there are some nice people that helped the girls out. A very good episode.

Blood clots and a body that hasn’t slept or moved in 2 days! That is the episode and it’s terrifying. The pile of red blood cells as people was a site to behold. Especially when it rolled around and made its way to the lung. Luckily, the two red blood cells were able to save the lung cells in time for it to go away, but yikes in a good way. It does make me wonder how old the person is represented in this show is. Forties? Fifties? I have so many questions. Either way, very good episode.

This episode was quite a ramp up in drama. I like how the bacteria are treated like a Jurassic Park kind of situation. The rocky nature of that park or aquarium first shown its face by representing how bacteria can turn against the body with red cell and platelets playing together in the most cute way possible. So as the bacteria invade, the group of NT Cell, Memory T Cell (upgraded Killer T Cell), and white cell search for cancer, find him, and inevitably lose in the end. I am pretty sure that normal cell and bacteria will be how this war is won, but we shall see. Lots of drama. Very beautiful episode and sakuga heavy too.

Welp, everything is in chaos once again as expected of Jujutsu Kaisen! Fushiguro goes against the current Zeni leader until chaos trully happens. The beast sent to kill Itadori by Kyoto is killed by the Cursed beasts meanwhile leaders of the event join in to help the students who must survive by themselves against tirals not seen yet. Gojou is apparently not allowed to enter for one reason or another. Interesting. So tons of good action and cool abilities and monsters as well. This should be fun.

Yeah, that was certainly an easy episode. An episode with a town of pretty boys who used to be farmed and Shu and Arrow’s plan to give them the capability to fight against the Lutoh with magical arm bands of magicalness. The pretty boys can now fight for themselves? The biggest thing in this arc to learna bout is how Shu and Arrow could leave Edger village at any time and also Ren has three days to go around the capitol of Rekka to save herself while Kai learns how to master his own abilities once again. The setup is more important than the follow through here.

Episode 5 was the best episode so far, but this one was pretty solid as well. Especially since the word that Kyoko and Izumi are dating has caused some changes. Rumors, Izumi cutting his hair, and a stalker who wants Kyoko’s love. Besides some fun moments at the Hori household with some movies over all of it all to provide a pg context to it all, the everything shaken up. I like how Izumi actually lives next to the second year and is kind to her as well. Maybe Kyoko and Izumi just adopted someone. I like it. I also like how Izumi snuck a kiss from Kyoko. I just find them adorable.

I like how on vacation; the show just has so much fun and energy to it with great skating as well. This was technically the beach episode with a lot of fun with the main set of characters enjoying themselves at a resort and other places. There was even the crazy mysterious ghost game with mud monsters on skate boards and Reki questions his own ability compared to everyone else because of how he is decent, but not exceptional compared to Lange and otherwise. Plus, ADAM is planning evil tournament events like a villain. This so is so much fun and I am glad that it exists.

Technically this is episode 69 of Attack on Titan as a whole and I can’t say that it has been that nice. I am kind of feeling more and more out of touch with Attack on Titan recently. It could be with how horrible these past two episodes try to cram in present and past the same time to add context to things that don’t need to be there or it could do with the fact that it really hasn’t been working for me just in general. It’s not the change in production studios that did it, because I feel like if WIT did this season, I would feel just as disjointed as I do now. It took until the show focused on characters I know for that to happen because I feel like I was a bit distracted by everything happening in Marley because it was compelling in a lot of ways.

This was an episode focused on blood lines which is interesting because they did not matter in this episode. Mikasa suddenly has a connection to this world’s japan proxy by the royal mark in her arm and as we see before in the future of that segment, it doesn’t change her at all. This was also the first time we see Historia since season 3 and she is either made fun of for deciding to have babies and escape a fate of becoming a Titan OR accepting a deal of peace with the Japan proxy. Same with Sasha not having any major moments besides the one good scene where they talked about the succession of Eren’s titan line which was used to show how Eren has changed compared to the post time skip.

I think the most painful thing is how this season is set up. Its very action focused with a lot of complicated things by following another empire and getting to know those characters and then inserting characters we know into a warring conflict. The difference is that once we step back and see all of those character moments up front and seeing the homework now, it doesn’t affect anything or change anything at all because you know how all of this ends. This isn’t framed like a heist where we see plans and then consequences and actions immediately afterwards. Entire episodes are spread out here and it’s really bad. I don’t like it. I think the result is me still being ok with this season, but my thoughts lessening and lessening on it all the time. Six episodes left.