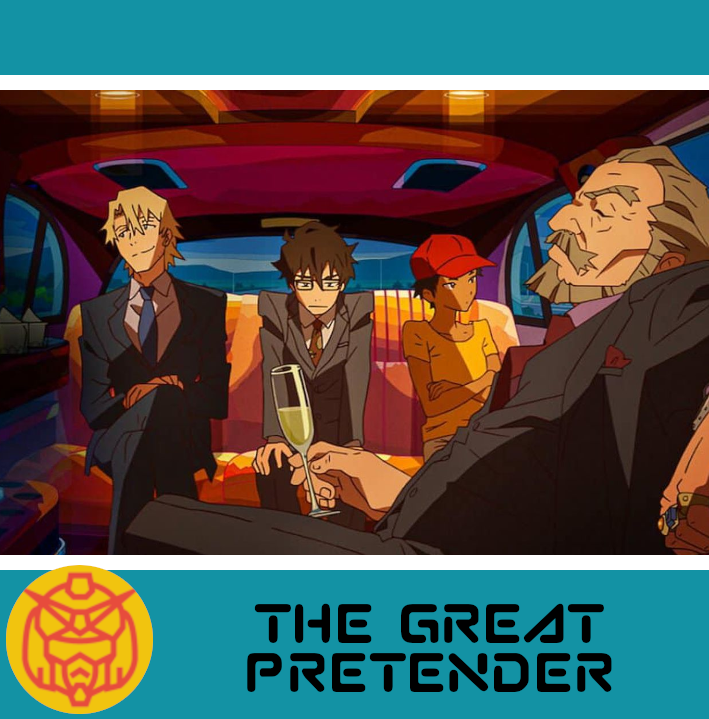 Hey everyone, I am here to complain about Netflix jail once again. Yeah, I still wish that it wasn’t a thing. In some ways it doesn’t matter. There is always more anime series to watch, right? Plenty of anime appear every season that can be watched weekly which is the seasonal experience. At the same time, there is an endless vault of older anime series waiting to be watched as well. That’s the crazy thing about being an anime fan; there is always something waiting for you to like or hate. Two sides of the same coin really. Still, what happens when you want to what a Netflix thing now? Well…

The Great Pretender is supposed Netflix original produced by Studio Wit. As one would expect from the title of this anime, it’s about people who take their own jobs in order to pretend to be people in order to rob victims out of their money. Another name for people like this according to the show is confidence men. This anime series comes in four different parts in unique locations and times from the point of the self-appointed “Best Conman in Japan” Makoto Edamura after he was tricked into joining the Confidence Men by the Frenchman Laurent Thierry. A fun time for all. No really, it is for the most part.

I really like how most of this show is constructed. The first three parts in five episodes that are pretty solid story telling and take different locations. There are also good emotional arcs for the focus characters involved, actual con work and hat tricks, and a good pay off in the end for each portion. You know that a story is good when it can pull off doing the same thing a few times in a row and you still wonder what is the trick here. Is Edamura falling for something again or how will this thing here come back in some way to affect the story? To me, that is fantastic story telling

Having a cast member of the Confidence Men in these locations helps to provide some emotional impact to what is going on which adds some more depth to the story. The first arc in Los Angeles is Edamura’s story and through coning a Hollywood Drugman as Edamura self reflects on his own life. The Singapore Prop Plane race was Abigail Jone’s (best girl) arc and it’s a journey about also coming to terms with her own past of having her family lost after a bombing in Baghdad. I also really enjoyed Cynthia’s arc in London from when she was a struggling actor year ago who dated a struggling painter compared to her being a rich con artist now. It’s a perfect level of simplicity and complication that works.

I think that is what the value of having Makoto Edamura as the central character is. I’ve watched a number of youtube videos and blog posts that don’t understand why he always shows up like he does in each arc. I think it has to do with him being the outsider. Makoto is the guy that goes off script and sees lines and interactions where people have their hearts missing and putting each person into a spot where, without being forceful, to at least give an answer to those moments. Its not to change who they are, but to at least accept who they were and who they are now. A soft sentimental thing that feels genuine.

Then there is the fourth part or what Netflix calls “the second season” that over shoots a lot of what it tries to do. In nine episodes, there is a backstory about Laurent in his younger days being who was picked up by a con group like Edamura was in the beginning and the added context of the current longer case of finding revenge against slave traders from Tokyo and Shanghai for killing his fiancé. Edamura’s father is involved in this crime gone wrong too, so it’s a very long con game that started with Makoto’s appearance and wrecks some of the material from the first half. It’s a bit of an unfocused mess that doesn’t do as much as it thinks it does. Especially since it doesn’t congeal that well.

There is also the fact that I don’t feel like I want to know anything about Laurent either. Knowing about his backstory isn’t necessarily a bad thing, but in the series, he works best as an agent of chaos that leads Makoto along by the nose. In my mind, his best sort of narrative utility is being the person who joins people together. Not because he isn’t that interesting as a person, but because he is so good at conning people and getting them to do things his way. The balance of the story telling was greatly disturbed here. To me, that is part of why the thematic resonance was muddled.

To move things into a positive direction, The Great Pretender looks gorgeous. Great character designs that have tons of personality, the art directors must have stopped by the real world locations they were in to get the locations on display in such fine detail, and I love how eye popping the color is. Or all of those real-world locations could come from google maps. Hard to tell. I think this fact is the best part of The Great Pretender. In terms of animation, there really isn’t that much. Sure, there was plane flight and some fast and good action here and there, but it was mostly standing around or sitting around and talking and that is fine because the deal revolves around dialogue. Still, I love looking at these scenes when the dialogue is happening.

In the end, I think that The Great Pretender is good. It’s mostly fun, mostly solid in its writing, and has some really fun characters that I would like to see more of. I don’t think the blah-ness of the second half ruins a lot of the great aspects of the first three parts that much. Especially since some of those attributes are in the second half muddled with horrible other things. That is what weighs the show down in my eyes, but I would still watch more The Great Pretender in the future if it appeared. I originally thought this would be something like Lupin the Third and I’m glad it did its own thing.