Eureka 7 is one of a few shows helps define a generation of anime fans. It appeared on Adult Swim a little more than a year before Death Note and Code Geass made their way to the same small screen. With a lot of people that I know on twitter otherwise, a lot of people really love it for a lot of reasons back then and fondly remember it now. I feel weird by saying that I am not one of those people who watched it on adult swim, but I did watch it a while ago from the reputation behind it. So yes, this post is another one recent re-watch, but I can see why it’s so special. If anything, recent times have helped me to appreciate Eureka 7 more. There is a lot of great things that make this show so special. The stellar dub that no one talks about, the romance in the story, the otherworldly world creation, and retro music that Eureka 7 say all that. Is it great though? Yes, for a lot of reasons.

I seem to have found some cliché when it comes to writing about mecha march this year. You will find this cliché at some point, but Eureka 7 takes place 10,000 years in the distant future on a planet called Kanan. There is so many mysteries of that world which are hidden to us in it, but the world is filled with Trapar waves. What are those? Well, energy that permeates in different parts of the world in the atmosphere called Transparent Light Particles or Trapar for short. These waves allow air ships to fly in the air by riding on them. They are also known to allow people on surf boards or even mecha on giant surf boards to fly in the air in an fun event called lifting. Trapar waves can also jam radar signals and such a lot like Minovsky particles in Gundam. There is a lot of unknown facts about this world that are hidden by the public, so I will not share them in this post because those reveals are spoilers.

Eureka 7 starts by following a young, growing boy by the name of Renton Thurston. A boy who is an outcast in his class in school and dreams of joining the cool, rebellious of Lifters called Gekkostate, especially that Holland Novak, because of how cool they are. He has a very naïve view of the world from his own little village called Bellforest where nothing interesting ever happens. Renton lives only with his Grandpa because the rest of his family disappeared for one reason or another that are hidden from him. His Grandpa plans on Renton becoming a mechanic and continuing the family business when one day, his life changed. A young girl with blue hair, with the name of Eureka, literally crashed into his house in a giant mecha and he ends up joining the Gekkostate. He can’t believe it happened, but he his living his dream completely out of nowhere.

Too bad that nothing goes to plan at first. He’s completely dismissed by the members of Gekkostate, is forced to live in the hanger for a while, his hero Holland wanders the around the ship in only his underwear with no sense of pride, and Eureka barely takes a lot of notice to him and has kids she takes care of. The only use that Renton has right now? Making the Nirvash, the giant mecha Eureka pilots, work better than before and used by the crew members of the Gekkostate for their own amusing goals. All of which shows how naïve Renton is. He is was that weird, self-assured kid that thought the world would work the way he thought, but the world isn’t interested in going Renton’s way. The guy doesn’t even know his own family roots which is important to the story. I love all of this. It’s so good.

I don’t want to share too much about Eureka 7, so this will be a shorter post then it could be, despite being 2000 words, but the first half of Eureka 7 is Renton understanding that naivety about the girl he likes, the world he lives in, and himself, to where he can eventually learn to accepting it all. The one thing we do know, besides learning about this colorful and wonderful crew of Gekkostate, is that the Gekkostate fights against the government in rebellion for some reason we don’t know about yet. Even then, sometimes the Gekkostate’s interests will line up with the governments when it comes to funding. The world is above Renton’s point of view and he gets in a lot of trouble or causes trouble for others without even thinking about his actions. It doesn’t help that the world he lives in is a fascist state, but it also doesn’t help that he doesn’t know about that fact either. So many misunderstandings.

The second half of Eureka 7 is about acceptance and owning up to what was beforehand. Renton runs away from the Gekkostate for a while and when he returns, he’s stronger mentally and physically then he ever was before. It could be because he understood the world now. He can stand up for himself and he can choose to fight the way he wants to separate from how everyone in Gekkostate does with the Nirvash. He also learns to accept Eureka for the unusual person she is and loves her for how unique she is. Especially since Eureka was never the girl, he expected she would be, but so what? This relationship between Eureka and Renton is the core of the story because more about the world is revealed as more about Eureka is revealed. It’s wonderful to love and live in this exciting world that the government wants to keep secret from everyone through their horrible hold down on the community.

Eureka 7 is a slow and meandering story, but it’s all for the better in my opinion. Having a government state hide the secrets of the world and having the story focus on a character who lives in it and slowly breaking out of the indoctrination provided and the world itself in order to fight against the government and its large flying battleship navy with lots of mecha for the fate of the world is cool stuff. A lot of small arcs in the first half allude to something that will be explained later, so patience is required. Some are very wild and Evangelion in nature that required some patience for explanation while others take place in small human areas or feature a religion, the Voderak, know about the world which are banned and wanted by the government dead or alive. All those marginalized groups who know the truth fight for it, led by Eureka and Renton’s love for each other, to fight against for the truth even if no one believes them. It’s just really good.

I love the core group of Eureka 7, the Gekkostate. They really guide the aesthetic of Eureka 7 as a whole. The music is very retro in style and each episode is like a record album or cassete tape with an A side and a B side, which is what the Gekkostate would listen to. Gekkostate is crew of a bunch of surfers who want to hit waves, but have to fight the government in rebellion with their mecha before it. The crew in general is a lot of fun even if there is a horrible, hidden past behind them that is discovered later. A bunch of couples, lots of good women, and such. Holland and Talhoe have a lot of growing up after they realize its time to grow up. Holland is one of many weak points in the story for a while until he accepts that the world isn’t going to go his way and has to accept what he has in front of him too. Eureka was meant for Renton, not him, and Holland finally accepting that changes the tone of the story. Renton is a mirror of Renton because he’s lived in the world, but can’t see how awesome it actually is.

Lastly before some visual and mecha thoughts, I don’t want to finish this Eureka 7 post before finally talking about Anemone and Dominic. Two people who are somewhat mirror Eureka and Renton in some ways as well. For instance, Anemone has red hair compared to Eureka’s blue, so there is that red and blue oni thing going on. Anemone is the more energetic one while Eureka is far more reserved. Dominic is also the naïve military soldier like Renton is the naïve rebel. The two couples complete each other in a lot of ways and eventually discover their love away from their role in the government state. Their path is a lot harder, but I find the two so enduring to each other especially since both of them live a hard life that is out of their hands. When they take on their destiny, they are such a wonderful couple that understands each other. I wish them happiness in their endeavors.

The world of Eureka 7 is multifaceted and comes in a lot of colors. The cities themselves look like they come from a war documentary. Lots of grays, darks, and browns, and somehow framed in the most boring way possible to show how distressed they are. The military themselves, whether ship or mecha, are very boring drab, uniform colors in the same way. On the other hand, there are a lot of places in Eureka 7 are wonderful and color. The Gekkostate is a white and green ship that exudes tons of color for its colorful cast. The ship riding on the Trapar waves is beautiful, the mecha, which are L.F.O’s, are multicolored and look great with tons of trapar waves underneath their boards. The character designs are wonderful and unique with tons of personality and change with any meaningful character discovery. It’s a good-looking show with lots of meaning behind everything.

Also, Eureka 7 has some of the most unique mecha designs in existence. Led by the wonderful Shoji Kawamori, the L.F.O.s and N.F.O.s are transforming mecha with tons of forms. A drive form on the ground and a form where they are surfers on trapar waves in the sky. The generic mecha units are very cool to look at, but nothing withstands the awesome Nirvash and the End designs. The Nirvash’s pink and pink color is stunning and not something expected for the main unit of a mecha show. The end, which is black is the opposite and provides a great challenge for it in terms of power and style. The mecha flying through the air on green trapar waves at high speeds are some of the most stunning mecha fight scenes in anime and I’m glad I watched the show that had it all.

Eureka 7 is a solid show because it’s a lot of different ideas that somehow work when combined together. I just loved watching it this time because I caught so much more out of it then I did when I watched it years ago. It is a show that meanders a lot and some arcs literally stop because the Gekkostate itself is stopped, but every arc has a point. Each one has a connecting tissue in the second half which elevates the overall experience beyond what was there before hand. I also think that Renton and Eureka’s story is one of the most romantic stories ever. The box set I watched Eureka 7 from did not lie about it this time. The last episode is kind of whatever for me, but the journey of Eureka 7 was not ruined by it. Eureka 7 is a special show for a lot of peopla and I think it is for me too. I’m glad I rewatched it again for Mecha March. Can’t wait to discuss more shows this month! 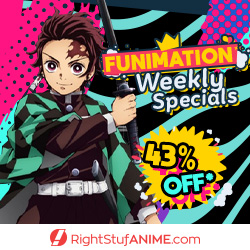