My blu-ray copy of Megazone Two Three of Animeigo finally came in after months of having some delays, so I am happy. I originally planned on having this ova series take part in Mecha March, but things just happen it seems. It’s here now though and AnimEigo did a fantastic job on it, so that’s all that matters. As long as it is high quality, I am happy and it is beyond that here. I have been wanting to watch this for a long time and I don’t think that having something be the best quality when watching it for the first time is a bad thing at all. If anything, it should be encouraged in some ways to show how great mid to late 80’s anime looks by watching something of this quality. There was a feeling of excess during that time due to a bubble economy situation and the Japanese definitely took advantage of that fact. Megazone 23 is the most 80’s thing that I’ve ever seen and I love it for that even if it’s not the best story that ever existed.

Do you know what was the biggest thing that I’ve discovered? The Matrix borrowed a lot of details from this ova series. I don’t know if it can be called ripped off directly, but it at least borrowed. Many people talk about how Ghost in the Shell was a major influence for the Wachowski Sisters for the Matrix, but there are so many more similarities to Two Three then there were ever Ghost in the Shell references. It feels like, and at some points it completely happened, some plot points and even lines of dialogue in explanation of the world itself were taken from Megazone 23 and why it is the way it is? I know that is somewhat massive spoilers for the ova itself, but I don’t see enough people talking about it. I do think the Matrix is different enough to warrant it being borrowed, but it’s really hard to tell here.

Megazone Two Three part one is the introduction chapter of the entire Megazone story. I did give away some of the plot by describing it as being similar to the matrix, but there is so many other details to explore here. Seemingly taking place in 1985 Tokyo, Japan, one day a motorcyclist by the name of Shougo Yahagi rides chaotically through traffic and meets a girl by the name of Yui Takanaka who is almost late to work. What happens? After Yui gave him a scolding, she rides on his motorcyle to her work and the relationship between the two starts. In fact, the entire story of Megazone 23 is just like that. Shougo just jumps into incidents behind his own comprehension and feels like he has to deal with them himself leading to failure. It’s convenient, but it allows the story to be told in 80 minutes.

The world of Megazone 23 is so alive and wonderfully characterized. I think that has to do with the fact that every frame is filled with people when Shougo drives his motorcycle from place to place and the fact that Yui, the feeling of pop culture taking its effect through the famous idol EVE on every screen available, or the fact that Yui and her room mates have jobs working in the different parts of the pop culture of the city itself. Yui wants to be an actor, Mai wants to be a singer, and Tomomi is a film director to be. There is a lot of good and effective short hand in a way that also characterizes people and the first 40 minutes of this story being about the city really brings things home. Of course, life changes when Shougo meets a friend of his with an experimental motorcycle that the military desperately wants. Its name is the Garland and it turns into a mecha.

This is when the world itself unfolds itself for Shougo. He sees layers behind the surface of Tokyo. I mean seriously, there is an empty city underneath this simulation of a city. Not to mention the reveal of what EVE actually is, the situation at hand with the Megazone Two Three as a spaceship 500 years after humanity left Earth, a coming war between the citizens of Megazone Two Three and the Dezag soon, and so many other things. Shougo’s life instead becomes something about that and he takes on the war with his transforming mecha against the military while trying to dig into the core of the Bahamut system and he fails at it. That’s how Part 1 ends and it’s a quick tragedy. Not to mention people leaving Yui behind at the end after either dying or the parents taking them away from the coming chaos. It’s a very sad end that you can feel in your heart.

So yes, a lot of the story is very fast, full of lots of things including actual McDonalds and not just McRonalds or some copy of it. That is a flaw for sure, but the fact that Megazone Two Three works stuns me. There is a very good through line of why all of the cultural aspects are needed to make this part sing together. That’ why I would rank it a good here. Plus, this portion of Megazone 23 looks pretty great. Lots of awesome mecha action sequences with transformations, lots of chase scenes that I sorely missed, and a wonderfully detailed and animated city that I don’t think modern anime can create as easily. There are some unconventional things that make it feel special even if it can be a little confusing. I did have to rewatch some scenes to explain it all. The excess can be too much sometimes, but whatever. It’s good. I liked it.

Part 2 of Megazone Two Three takes place six months after part one and features all of the plot elements that were alluded starting in motion. There is also a massive art style change which I am and am not a fan of. It does fit the aesthetics of this part, but it took me a long time for me to tell who was who. For instance, Yui doesn’t have green hair anymore so she fits way too well into the background. But, Part 2 looks even better then Part 1 because of all of the experimentation and the larger amount of space fights that happen. It also features a larger cast with Yahagi Shougo’s motorcycle gang against the governmental forces of the Megazone 23 to save the future? While I don’t know them that well, it’s pretty clear that they have a relationship with each other and I love all of them so dearly because of how adorable they are.

So anyway, the story of part 2. After Yahagi Shougo finds a seemingly normal life with the motorcycle gang, he gets conned into restarting his revolt against the government by getting sent help messages by EVE to another experimental Garland transforming motorcycle unit. This time, he doesn’t act alone, but with Yui and the motorcycle gang with him. It’s his fight to go into the core of the machine to save EVE and all of humanity with it. All of this happens while there is a space battle between Megazone and Dezag forces by the way. There are some real stakes to awaking the AI around earth to save the Earth here and it somehow works out in the end. Just think of the very end of the End of Evangelion but it’s happier and features a motorcycle gang with the leader wearing a letterman jacket that says Sex Wax. That is how it wraps up in a nutshell.

I already mentioned the visuals of Part 2 a little bit, but this is excess to the maximum once again. Why? Because it’s honestly the most 80’s thing that I have ever seen. It even has He man and thunder cats on pin ball machines. Plus, the 80’s motorcyclists vs military forces battle was incredibly 80’s and I just had a continuous smile on my face and in my heart watching it. While Shougo and the Garland themselves don’t get as much play, that’s fine for me honestly. There is enough good mecha things going on in space and underneath the city that I can’t even be happier than I am. I should also mention the Dezag mecha? The ones with the mechanical tentacles? The Matrix took those from Part 2. You cannot defend this at all. I am just saying…

With all that in mind, I think that Megazone Two Three Part 2 is a solid for me. I do realize that there are plot issues with how complex it is in a short amount of time, character issues because they are simple character, and how the story is like a longer third act to the first and second acts in Part 1, but it’s very good and very addicting. I didn’t look away from the screen once when watching Part 2 and that is incredible. It seems like I discovered another great thing that I can’t help but love to death in the obscure field of 1980’s anime. Love that fact. Love discovering gems that I have never watched before. Count this with Giant Robo. With that said, not a large fan of Megazone Two Three Part 3 from what I’ve seen right now. Hmmmm. More on that next week. 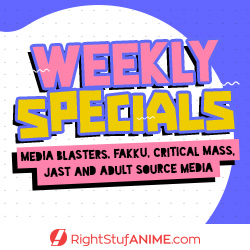