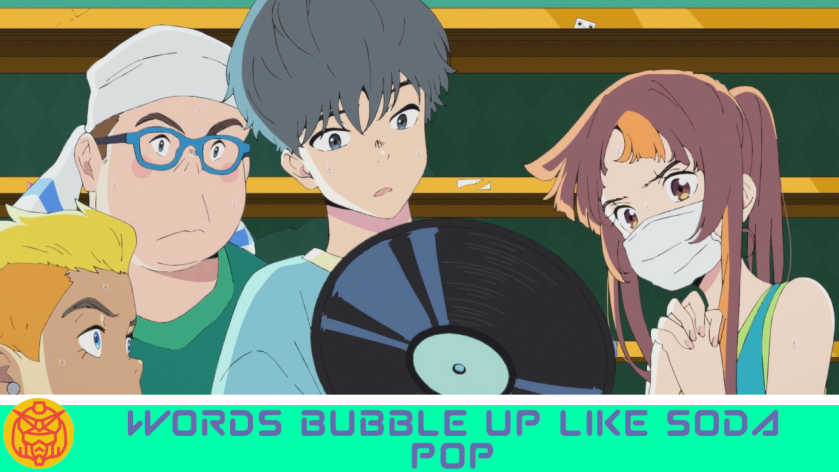 Do you ever feel like you are on top of things until some things slipped through your fingers or mind without any notice? I like to think that I generally know when anime things become available because I follow a lot of twitter accounts to know. Yet, Words Bubble Up Soda Pop is one of those that escaped. Yeah, just going to blame Netflix for this because of their lack of advertisements for almost everything they acquire despite most of them being high profile. I remember seeing all sorts of reviews for it and I didn’t check it out until the week of writing this. I don’t mind that really. Especially when a surprise movie comes out that is pretty good. Yeah, I am glad to have this appearing out of nowhere.

One day, a self-conscious idol girl name Smile enters a mall to live stream cute things on her cell phone. The cute girl is self conscious because she has buckteeth, but she has popular live streams anyway. While showing off the cute elements of the mall to the world. Unfortunately, a small theft happens regarding a cardboard idol that literally causes Smile and a quiet boy with head phones to clash together. A boy named Yui Sakura (Cherry) who is self conscious about himself, but loves to make haikus when the moment speaks to him. After their exchange of phones, the two finally meet each other.

This movie is one of the softest and most mellow movies that I’ve ever watched. It’s a very low-key and low energy film. The highest moment of energy the film ever gets is the beginning when side characters get angry after the heist of the cardboard idol and the tagging of Haikus on a kid’s car. This is not a film filled with highly emotional and passionate main characters. Yui is a very introverted kid who keeps his head phones so no one can communicate with him. Smile herself is very shy outside of her very poppy personality as she wears a mask to hide her teeth. The show fits the introverted personality of the leads.

There is a lot of thematic relevance to the show’s lower tone to being like that. Especially with the objects the characters wear while also exploring the past of the mall these characters are working on. A picture of history that will effect everyone including the old person that is missing a record of his lover at the job Cherry works at. It’s a very slow burn sort of romance like that with a lot of set up and build up to create the conclusion it creates. It can be a bit of a tedious film, but it all works together. Especially when these characters finally meet and join together for all of these things. The headphones and masked laid to the side when Smile and Sakura shake their fears to kiss each other. Its so good.

If there is another strength to this film, it’s the side characters. At least to the point where I was saddened when they didn’t appear as often. For instance, there was a conflict between the grandson of the old man looking for his record and one of Sakura’s friends. We don’t see how that plays out and it doesn’t effect the two meeting together later. Same with Smile’s sisters helping her up and Sakura’s friends geeking out over Smile considering how she is an idol online. It seemed like a classic kind of high school movie or tv show dynamic with the boys and girls talking to each other like that on the phone through a camera and that was all we saw of it. A strength that the show mostly left behind.

As for visuals, I think the character designs are alright. I mean, they are fun and expressive and I swear I’ve seen them before. Annohana I think? They do feel nice and clean. Sometimes simple character designs are the best. I really do like the summer like color through out the show. Really captures the feeling the show is going for with that sense of color all around. The show itself is very well directed. Obviously, some cg helped give the film some shots that traditional animation by itself wouldn’t allow, but it’s rather seamless. I mean, Words feels like a cg directed or assisted movie and that’s about it for that. Not a bad thing at all. It feels very good for what it sets out to do.

So yeah, I think Words Bubble Up Like Soda Pop is a good film. I like the tone of the movie, I like the main characters because of how relatable they are, and I do like the story of it too. Themes centered around haikus and live steaming are fun and are like old meeting new. Something which is a theme of this film that carries over it. I just wish that maybe it couldn’t be as tedious as it was at times or even, having the good side characters could have played into it too. That’s about it. Some dings to mark into the film’s siding. Barely there, but lowers the quality of it a little bit. Still, it’s a good recommend. Very cute and very fun. Highly recommended for all audiences. It’s even on Netflix, so go check it out.