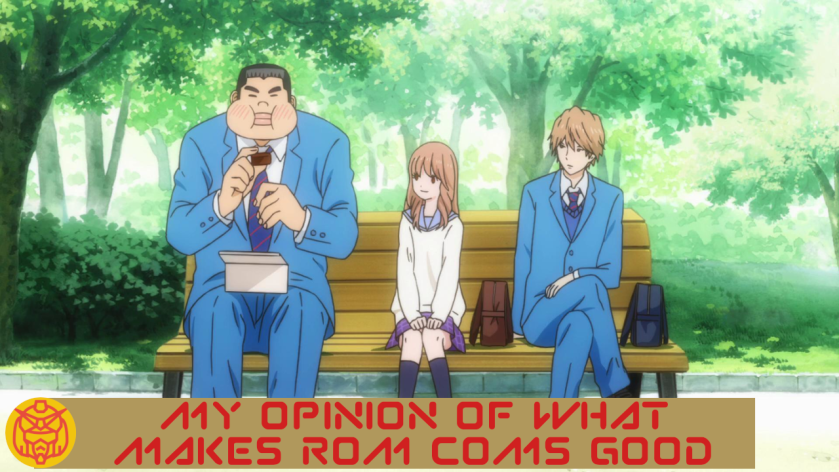 I feel like I have written about this topic before, but a lot of my opinions have changed somewhat about anime romantic comedies. I think it helps when a person can actually find something in a genre they like and I certainly have. There are very specific reasons for why I did like them and I will get to them very shortly. But before there, there was a reason why I didn’t like romantic comedies as much for a long time. That involves the separation of romance drama from actual characterization. At some point, a vast majority of romantic comedies feel like they just stop thinking about advancing characters. It all becomes about the well they, won’t they which feels on autopilot compared to characters actually making decisions about want to be with each other. Misunderstandings can be so frustrating in that situation.

So, what romantic comedies or just romance have I found recently? Well, there has been fruits basket. A very long but well characterized story about not only romance and comedy but escaping from the past. There has been something like Adachi and Shimamura and Bloom into You which are yuri focused on characters so obtuse to relationships that seeing them get closer is somehow satisfying Also, Horimiya and which, while rushed and skipped a lot of things, but was still a decently realized anime about two people becoming a couple and then being around the issues around maintaining that relationship. (I want to mention Ore Monogatari and Tsukigakirei here too.) I could name others, but the last one is what I talked about this week, Tsuredure Children that had relationships that worked and yet didn’t in the same package. You could say that is the reason why this post is being written.

Why do these shows click or me even if a lot of them follow the kissing at the last second before the relationships truly start? Well despite following that anime cliché that we all make fun of; it makes sense in the context of a lot of those stories. When all of these characters try to connect with each other, they also have to deal with their own personal issues. So obviously, how each of these characters are programmed is what is holding them back. It’s not just romance drama, but personal drama and connection drama together into a complete package. These are the most relatable experiences possible because how a person sees and changes themselves when connecting with the other person they are after is a major success. Not just a success for them, but for the couple for finally communicating together.

So yeah, that last moment kiss or even hand holding can mean so much and makes their romantic journey with it. All of this just means that I have to admit to actually liking romantic comedies. While having adult relationships click faster and then seeing the relationship maintain itself is good, I don’t see as much wrong with a romance happening at the end of an anime anymore as long as its well done. Clichés can be clichés for a reason sometimes? Sometimes it just works for the story the anime or manga or whatever wants to tell. That is the sort of thinking that is leading me to try to search for more romcoms that appear every season. Its gotten harder because they don’t appear as often, but I search anyway. There are good ones out there and that’s all I need to keep searching.